Theaters Plan a “Horror”ble Season For This Halloween 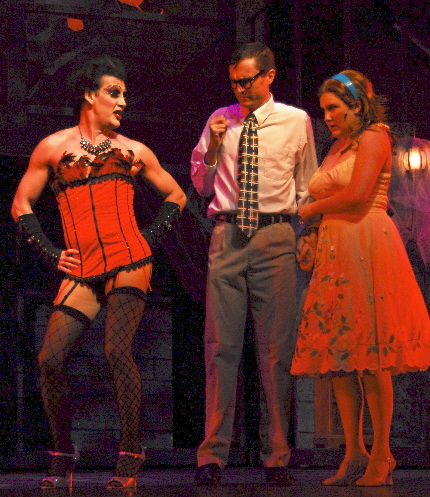 Larry Buzzeo shows off his ensemble in Slow Burn Theatre Company’s The Rocky Horror Show in 2011. Slow Burn is foregoing its semi-annual Rocky production this year, but other companies are taking up the challenge.

Never have the undead been more alive than in South Florida theaters this month as companies take advantage of the spooky season to raise money or just let their unnaturally hirsute hair down. Both the original play The Rocky Horror Show and the cult film, The Rocky Horror Picture Show, are mainstays of various events. But there’s more than that.

Zoetic Stage is hosting a Rocky Horror Halloween Bash fundraiser at 8 p.m. Saturday, Oct. 26 at Le Club Miami at the Regency Hotel, 1000 NW LeJeune Rd. Tickets are $75 in advance and $100 at the door for which you get an open premium bar, hors d’oeuvres, dancing, and what is billed as “The Rocky Horror Picture Show” entertainment. Costumes encouraged. Call (305) 495-5958 for information.

Actors Playhouse on the Miracle Mile returns to its roots as a movie house by inviting crowds to come do the Time Warp again – again – at a free showing of Rocky at midnight (between Friday and Saturday the 26th).

You can touchame-touchayou in the theatrical version playing Oct. 31-Nov. 2 from Curtain Call Productions performing at Jensen Beach Performing Arts Center
2875 NW Goldenrod Road, Jensen Beach. Call (866) 811-4111or visit www.curtaincallfl.com. (Not to be confused with the Broward-based Curtain Call theater)

Frank N. Furters are everywhere, even in Key Largo, where the musical is being reanimated by Ginsberg Productions on Friday, Oct. 31, and Saturday, Nov. 1, at the Murray E. Nelson Government and Cultural Center at 102050 Overseas Highway, Mile Marker 102. Visit ginpro.org for details.

In the Rocky Horror theatrical vein, but missing Meatloaf or meatloaf again, is a full production of Zombie Prom at Andrews Living Arts Studio, 23 NW 5th St., Fort Lauderdale. Call (954)530-1879 or (800) 838-3006 or visit www.andrewslivingarts.com. It’s a spoofy musical that combines horror, high school and the horror of high school. Check website for schedule. A preview is slated for Oct. 10 and the show runs through Oct. 31. A special performance is set for midnight, Saturday, Oct. 26.  A performance will be held, of course, on Halloween at 8 p.m. with patrons invited to arrive in full zombie costume for contest.

Slow Burn Theatre Company, which has produced Rocky twice (Horror, not Balboa), is foregoing it this year in favor of its second Monster’s Ball (an actual ball not the movie) as a fundraiser on Sunday, Oct. 27 from 7 p.m. to midnight when presumably some people will change shape. The costume party will be held at the Intracoastal home of Mark Traverso and Conor Walton, 610 Carriage Hill Lane, Boca Raton. A minimum $25 donation per person at the door, will gain you access to the full open premium bar, delicious food, live music, entertainment and “surprises around every corner.” RSVP to Conorwalton@aol.com.

And as Rudyard Kipling asked in a different context, can you keep your head when everyone around you is losing theirs? KWP Productions will host a production of Washington Irving’s The Legend of Sleepy Hollow on Oct. 31 and Nov. 1 at the Borland Center for the Performing Arts, 4885 PGA Blvd. in Palm Beach Gardens. More information is at (561) 339-4687 or (561) 352-5671 or www.kwpproductions.com . It’s described as “Ichabod Crane, a nervous and superstitious sort, is the new schoolmaster assigned to Sleepy Hollow, a small town by the Hudson River. He sets his eyes on Katrina, but Katrina is already “claimed” by Brom Bones, the biggest bully in town! The tension between the three peaks with Ichabod’s ill-fated return through the woods and an encounter with the Headless Horseman. The Legend of Sleepy Hollow is a classic tale of love, revenge and intrigue by Christopher Cook. KWP shows feature professional level young and teen actors; some productions include adults.”