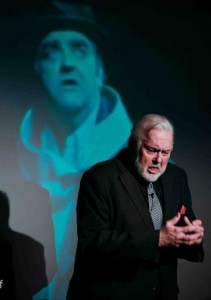 Character men. A few had marquee names that still resonate like Zero Mostel; others are vaguely recognized by a younger generation such as Mostel’s buddy Jack Gilford; some are known only to Broadway buffs such as George S. Irving. Perhaps one of the few high-profile performers in the current generation fitting that category is Nathan Lane.

So Brochu created a new one-man musical, Character Man, that  bows Friday for a month-long run at Broward Stage Door. Well, not really a one-man show. In addition to a piano and bass, Brochu channels an entire cast of colleagues, most dead now. He performs their signature numbers such as Gilford’s “Meeskite” from Cabaret, and others simply because he loves them, such as Robert Preston’s “Trouble” from The Music Man.

The song list over two 45-minute acts includes “If I Were A Rich Man,” “Mr. Cellophane,”  “Captain Hook’s Waltz,” “It Takes A Woman” and “Everybody Ought to Have A Maid. ” The finale is from Wicked, “For Good,” written by his college friend, Stephen Schwartz, but sung here as a tribute to his friendship with David Burns.

Interspersed are Brochu’s memories of performing and socializing with these men along with Charles Nelson Reilly, Jack Albertson, Jack Klugman and Garson Kanin, all tied together through memories of Burns.

And, of course, Mostel, who Brochu resurrected in the successful Zero Hour at the Broward Stage Door and off-Broadway, which won him a Carbonell Award in 2009 for best actor in a touring show, as well as a Drama Desk Award, LA Ovation Award and Helen Hayes Award.

As a teenager under Burns’ mentorship, Brochu hung out with these older colleagues. Notably, he saw their off-stage personas. “Some were realer than others. They were all different. Zero was a real extrovert; if there was someone else around, he was ‘on.’ But Davy and Jack Gilford were the total opposite. They were normal. Some you’d think were just businessmen.”

But they had characteristics in common, Brochu recalled. “Most of them came out of a very lonely place. They were always on the outside in so many different ways.”

In fact, many of them shared a quirky physiognomy: slapped together bodies and rubbery fleshy faces with piercing sad eyes.

“They all had this very unique sense of humor. They all started in vaudeville or burlesque or nightclubs where they honed their skills.”

Brochu feels a kinship. “I feel very lucky. I’m just a link in the chain, the middle of a chain for these actors who are coming up.” He cites young talents like Josh Grisetti and Bobby Steggert as inheritors of that tradition. 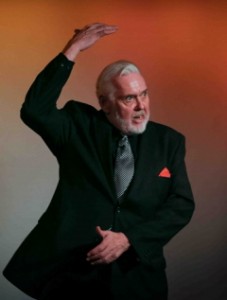 The seeds for the piece were planted in 1971 when Burns died and Brochu wanted to honor his friend. The idea marinated for decades. “ I’m a very quick mover. Soon as I have an idea, I seize on it,” he said drily.

Over the years, he thought about developing a cabaret show – that evergreen stand-by in a performer’s every-ready repertoire. But director Robert Bartley saw the potential for a full show. Last fall, Brochu began solidifying the script , which would be punctuated with photos and videos of the character men he had met.

In September, while the script was gelling, he was performing Zero Hour on a transatlantic cruise when the boat dodged three hurricanes and was forced to skip ports where it was to pick up other entertainers. The cruise director said, “Have you got anything. And I said, just so happens I do, I haven’t memorized the dialogue; I’d have to work from notes. But he put me on, and the audience reaction was sensational. This is my audience: people of a certain age who know these people and who love all these songs.”

He mounted a 70-minute version at the Metropolitan Room in New York on Oct. 1 and has been tweaking it ever since.

Brochu certainly qualifies for the role. He has played supporting roles on Broadway, off-Broadway and in regional theater for decades. He even looks the part: tall, broad-shouldered, twinkling eyes, snow-white hair and a girth that comes and goes (He lost 50 pounds since portraying Mostel “by not eating anything white.”)  Unwilling to wait for work to come to him, he has authored two books including one about his conversations with Lucille Ball, 10 plays and two musicals, The Last Session and  The Big Voice: God or Merman? both of which have played in South Florida.
Character Man and Zero Hour have proven an energizing and rewarding encore to an actor now in his mid-60s.

“I’m like a kid before Christmas….  F. Scott Fitzgerald is a big fat liar. There are second acts in America. I’m living proof.”

For videos and photos from Character Man, click here. and here.