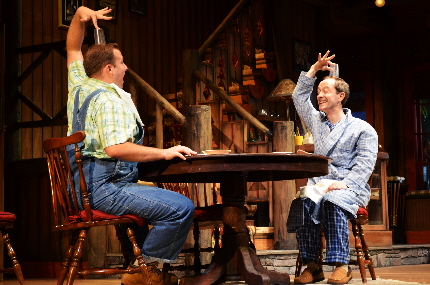 The egg sculptures were bestowed on a wide range of productions, both geographically and stylistically ranging from such edgy fare as Actors’ Playhouse’s jet-black chamber rock musical Murder Ballad to the mainstream strains of the percussive classic musical 42nd Street at The Wick Theatre.

For those looking at trends, Miami-Dade theaters fared much better this year than Palm Beach County companies, continuing last season’s reversal that contrasted with some recent previous years. But most noticeable was that Broward County was completely shut out of any awards even though two Fort Lauderdale area theaters had four nominations going in.

When Murder Ballad director David Arisco accepted the Best Ensemble Award, he quipped, “This might be the only award we win.” He couldn’t have been more wrong. The play about a deadly love triangle was also recognized with the Best Supporting Actress Award for Miami native Mariand Torres and Best Supporting Actor Award for Chris Crawford.

One surprise was that three awards went to Peter and the Starcatcher,  a lush production of the alternative Peter Pan origin story, co-produced by the Arsht Center and the University of Miami’s Theater Department: Eric Haugen for lighting, Yoshinori Tanokura for the massive fluidly flexible set design and Nicholas Richberg for Best Actor In a Play as the delightfully over-the-top pirate, Black Stache. Richberg began his acceptance speech with “Oh my God,” a sly reference to the only words he spoke over and over for three or four minutes when his character slammed a trunk lid on his hand. Peter was the fifth joint production of the Arsht and the college whose head, Henry Fonte, directed Peter and is leaving the school.

Slow Burn Theatre Company, the up-and-coming troupe which is moving from Boca Raton to the Broward Center next season, also won honors for its dark horse production of Jason Robert Brown’s musical Parade about anti-Semitism in early 20th Century Atlanta. The effort was tapped for Ann Marie Olson’s stirring portrayal of the doomed protagonist’s wife and the musical direction of Emmanuel “Manny” Schvartzman.

Zoetic also received two recognitions for its world premiere, Clark Gable Slept Here. The wicked satire of the contemporary world of fame and pop culture won Best New Play for writer Michael McKeever and Best Director of a Play for Stuart Meltzer. McKeever noted with gratitude that the script has already had five productions.

Several of the acceptance speeches were alternately touching and hilarious. Choreographer Ron Hutchins, scoring for his work on The Wick Theatre’s 42nd Street, tracked “the trajectory of my life” from a childhood in the inner city of Cleveland to two solid years of assignments, including work in China – which led to another job there that he was leaving for the next morning. “The community has given me confidence I did not have in myself,” he said in his distinctively raspy voice.

Perhaps the loudest ovation was for Mark Della Ventura, a popular actor/playwright, who won Best Supporting Actor in a Play for his portrayal of the quiet, gentle sibling in GableStage’s Bad Jews. When the tumult ebbed, he began by saying, with a broad sheepish grin on his face, “So this is what it feels like.” Then he thanked director Joseph Adler for “thinking that an Italian boy could play a Jew.”

Clay Cartland won Best Actor in a Musical for his manically physical portrayal of a young man turning into a slug in The Trouble With Doug from The Arts Garage in Delray Beach. Cartland’s heartfelt acceptance was the longest of the night, thanking virtually everyone he ever worked with.

Crawford who has also performed in Palm Beach Dramaworks’ The Lion In Winter and Zoetic Stage’s Assassins said wryly, “I ran away to Florida… from Tulsa because of situations that came out… well, when I came out.”

Another round of sustained applause was reserved for Olson who just finished a universally acclaimed performance as the title character in Always…Patsy Cline.

Arielle Hoffman was in New York working on a play and unable to claim her Best Supporting Actress in a play statue for her portrayal of an estranged daughter of a dying morbidly obese man in GableStage’s The Whale. But her real-life father, the wildly popular actor Avi Hoffman came to the podium on her behalf. He noted that he would be known as Arielle Hoffman’s father, a joke repurposed by her mother, the acclaimed actress Laura Turnbull, when she presented another award later in the evening. 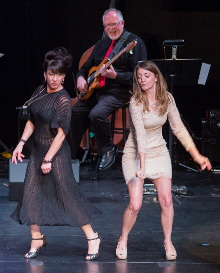 There were memorable moments just in the presenters’ run-ups. Actresses Niki Fridh and Gretchen Porro, who just closed their run in Zoetic’s Trust, mentioned to all of the nominees in the choreographer category that they were available “actresses who move” and demonstrated by doing some moves in tandem that resembled The Frug.

The award ceremony this year took special notice of the actresses who have graced the local stages with a slide show depicting dozens of performances stretching back decades. See to see it on Facebook, click here.

Entertainment was provided by excerpts from the five nominated musicals giving the audience a chance to see three of the performances that won awards: Murder Ballad with winners Crawford and Torres, and Mark Sanders; The Trouble With Doug with winner Cartland and Patti Gardner, Alix Paige, Shane Tanner and Barry Tarallo; Parade with winner Olson and Tom Anello; The King and I with Michele Ragusa, and best musical winner Assassins with Irene Adjan, Nick Duckart, Nicholas Richberg and Gabriel Zenone. The on stage band included Caryl Fantel, Rupert Ziawinski and Roy Fantel.

Shiller, who is leaving Florida next month to be president and CEO of the Denver Center for the Performing Arts, was honored for “contributing significantly to the artistic and cultural development of the region.”

Acker is best known today as the host of arts interview television programs including On Stage With Iris Acker and its successor Spotlight on the Arts. But Acker has a lengthy history of leadership that qualified her for the Kleinberg Award, given intermittently since 2000 as special recognition for contributions to the health and development of the arts in South Florida.

After a career as actress and dancer in New York, she performed roles across Florida, served as the first Actors’ Equity Liaison for the State of Florida, started a casting hotline, began a half-price ticket program that would eventually evolve into Cultural Connection and was elected president of the American Federation of TV and Radio Artists union locally.

Foreman Award recipient The Naked Stage is a company founded in 2007 by John Manzelli, Katharine Amadeo and Antonio Amadeo which specializes in intimate and edgy works. The trio created The 24-Hour Theatre Project as a fund-raiser for themselves and three other companies. This season, the theater staged a similar program to underwrite the medical treatment of theater supporter Dana Castellano, as she battled cervical cancer. Then they double their commitment by donating the profits from last season’s 24-Hour Project to Castellano’s fight.

Passing The Torch
The Carbonell organization uses proceeds from the ceremony and other fund-raising to provide $1,000 college scholarships to graduating high school seniors who plan to pursue a degree in theater or journalism.

This year’s winners who came on stage to receive their awards were:

Gena Yvonne Sims is a Miami-Dade County student at the New World School of the Arts. She is described by her director/acting teacher as a gifted actress, singer and dancer. With all of her responsibilities at school she has made time to initiate the Autism Theatre Project which she describes as an effort to give autistic children the tools to express themselves in order to better share their unique messages of love and acceptance with the outside world.

Danielle Angela Jensen is a Broward County student at Margery Stoneman Douglas High School and is an actress, dancer and choreographer. She has excelled academically and is a member of the National Honor Society, the National English Honor Society and International Thespian Society.

Jacob Poser from Palm Beach County is a student at Alexander W. Dreyfoos School of the Arts who already has a long list of credits in various theatrical technical areas. Recently he has narrowed down his many interests to costume and set design. The dean at Dreyfoos describes Jacob as a meticulous and highly creative designer with great attention to research and detail. Jake also spearheads a fund-raising campaign for Broadway Cares/Equity Fights AIDS.

The Carbonells have always been a source of controversy in the theater community. For instance, many people appreciate the honor and recognition. But some – including people in that first camp – contend that rewarding art should not be through a competition among diverse and dissimilar works and performances. Some privately knock the awards. But many – including people in that camp – cite them on their playbill biographies and display them in glass cases in their lobbies.

The Carbonells were created by a group of area theater critics but is now operated by a non-profit board of theater professionals and supporters.

The Carbonell Awards are named after the late Manuel Carbonell, a Miami-based sculptor, who designed the original solid bronze and marble award in 1976.