Arts Garage Gets Temporary Reprieve, But Required To Make Major Changes To Continue 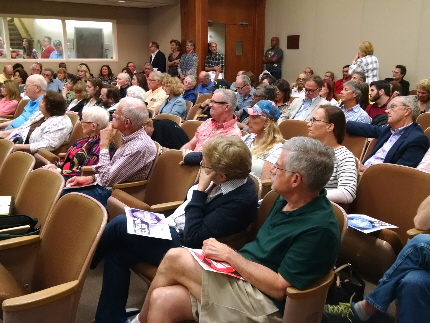 The commission begrudgingly agreed to give the nearly five-year-old multi-disciplinary venue a month-to-month lease for six months when its current lease expires March 15. But the extension is solely to give Arts Garage’s leaders a last chance to make permanent changes in everything from programming to accounting.

The non-profit was in danger of losing its lease on the built-out first floor of the city-owned parking garage just east of Old School Square where it presents theater, concerts and art shows. Its current lease with the city was contingent on buying the space by March 15. But Arts Garage leaders say they have been unable to raise any money for a sale and they had decided not to pursue a purchase – a decision made so quietly that not everyone on the city commission knew about it even in the middle of their discussions Tuesday night.

This week, Arts Garage had prompted supporters to send nearly 300 emails to commissioners and they gathered about 90 cheering partisans at Tuesday’s city commission meeting. Thirty people spoke, all but two lavishly lauding the way the venue had enhanced the cultural fabric of the community and how it had brought considerable economic traffic to surrounding restaurants and other businesses.

In response, all five commissioners reiterated their support of the concept of a performing arts/visual arts center to augment the growing Pineapple Grove business district next door. They recognized Arts Garage’s staff’s hard work and appreciated the company’s contributions to the city.

“This space is a treasure,” said Commissioner Mitch Katz. “To keep the relationship is a no-brainer.”

But they all sternly expressed serious displeasure at a broken promise to buy the facility, a lack of communication about such plans as contracting to run venues in competing Pompano Beach, and, at best, disorganized fiscal controls that only now appear to be improving.

Mayor Cary Glickstein said, “It has only survived because of the generosity of some of its current board members and the people who contribute to that. I just don’t have confidence in the current management structure to where it’s a steward of taxpayer money.”

He quoted a conversation he had with a staffer in the firm that audited Arts Garage’s 2013-2014 finances — a verdict that Arts Garage has described as “clean.” But the auditing firm’s supplementary private management letter cited several issues that needed correction. The staffer told Glickstein that while no money was missing, the system in place at the time was “a train wreck.”

Current and former members of Arts Garage’s umbrella parent organization, Creative City Collaborative Inc. (CCC), acknowledged “failures,” but said many improvements already had been made, including hiring a new chief financial officer. They pledged to do whatever was necessary to fulfill the city’s demands.

The CCC and the city will meet in a lease negotiating workshop after Arts Garage puts together specific responses and corrective plans that are prerequisites to any new multi-year lease, the parties agreed Tuesday.

Based on specific requests from one or more commissioners, the preliminary consensus for such a contract would include:

—Create a lease lasting 2 to 5 years, but not the 10 years that the CCC had asked for and that the commissioners soundly rejected. A sale specifically would not be part of the contract.
—A clause that would allow the city to cancel the lease if Arts Garage’s financial situation did not change.
—Significantly change the structure of the management and add an experienced financial administrator, although Glickstein said that did not mean that any current staff had to be replaced.
—Create a sound business plan, presumably for operations and procedures.
—Produce an ongoing quarterly review by the city of Arts Garage’s efforts to address financial problems.
—Bring diversity to the all-white CCC board and begin efforts to make minorities feel more included in the venue, such as subleasing space for day classes to the Milagro Center, which serves many minority children. That also would maximize the use of the nearly-dormant space during the day.
—Require decisions such as a sublease or other external contracts to be approved by the city commission.

No formal vote was taken, only a consensus of direction given to city staffers.

But other issues emerged. Commissioners agreed they do not want to sell the 10,000-square-foot space. Vice Mayor Shelly Petrolia noted that under the terms of the bond issue that paid for building, the city could not sell the facility until after 2025 for more than $2 million without losing the bonds’ tax-exempt status. The property has an estimated market value of about $4.5 million.

At the same time, Glickstein said other groups might be interested in leasing portions of the property in ways that would maintain it as culture-related “public meeting space,” such as housing an independent bookstore. Arts Garage recently renovated the entire first floor space, expanding its arts gallery and building a small black box theater.

Hearing From the Public

A parade of Arts Garage partisans, volunteers, board members and patrons from Delray and around the county spoke passionately for almost an hour and a half about the quality of the work and the need for such an institution.

Eric Fisher of Boca Raton, a middle-aged man who lost his sight about five years ago, testified, “It has offered me a way to see without using my eyes. It has offered me so much color in a very, very dark world…. I need them in my life.”

But even its supporters admitted problems, typified by the inability to raise any funds toward the building’s purchase. Chuck Halberg, a developer who has contributed materials for the theater’s renovation, said, “Granted, we failed. We failed miserably. But that doesn’t take away what the Arts Garage has done for this community… It’s an investment in my community.”

Arts Garage board member Ronnie Dunayer added, “When an organization undergoes tremendous growth in a relatively short period of time, there are instances in which sometimes the underpinnings need to be strengthened…. We recognize what our tasks are to reinforce the strength of this wonderful organization that we love….”

Noting that “artists are visionaries, not accountants,” resident Kelly Barrette and others called on the city to provide the expertise and oversight to help the CCC straighten out the concerns.

Former board president Robert Schmier said that while the group had not raised money to buy the space, “we have raised a great deal of money” toward operational expenses and productions. “Have we had growing pains, are we doing all we can do from a diversity standpoint, from a daytime activities standpoint, have we put all the space to the best possible use and being able to use it all and generate foot traffic during the day as well as the night? No. But we are making progress in it…”

The sole dissenting speaker was resident Kevin Warner: “I love the arts… However I expect individual responsibility and professional performance…. Instead, in the management letter… we read about the questionable use of a credit card, poor reporting of spending activities and other discrepancies… And the salaries, that’s Balzac. I believe these are self-serving individuals who cannot be entrusted with the faith that you have shown them to date for the last few years.” He suggested “showing them the door” or have them partner with adjacent Delray Center for the Arts in Old School Square.

The Arts Garage’s CEO Alyona Ushe, who has admitted that her personality has rubbed some people the wrong way, repeated what many of her board members and patrons had said: That the Arts Garage is grateful for the city commission’s support of the arts in general and Arts Garage specifically.

Equally skeptical was Commissioner Al Jacquet who said “I think you failed miserably on a lot of these things. I used to go to the Arts Garage but I haven’t been there for a very long time and part of the reason is I really don’t have much reason to go there.” He said the minority community felt no kinship or inclusion, from the all-white board to the programming in place.

But quietly, CCC and Arts Garage members murmured that much of the concerts offered was blues and jazz, and the next play detailed the life of blues queen Bessie Smith.

While the lease situation has percolated, a separate but interrelated issue continues evolving about whether the venue has the money to continue operating at all.

That problem centers on relations with the Community Redevelopment Agency (CRA), an economic development agency created by the city commission but independent of it. Since its inception, the CCC has received grants from the CRA to help develop the adjacent Pineapple Grove Arts District.

The CRA planned to distribute money quarterly after receiving financial reports from CCC. Following accounting practices, each quarter’s funding reimburses Arts Garage for funds already spent and subsequently documented. But when the CCC gave the CRA its 2013-2014 audit and the management letter, the CRA withheld the fourth quarter funding for July, August and September worth $68,725, pending better documentation of spending.

In a vote Jan. 28 and reaffirmed Feb. 11, the CRA said that it would retain the fourth-quarter funds and also table CCC’s request for another $275,000 for the current fiscal year. The CRA’s new demand was for CCC to provide a 2014-2015 audit that showed the earlier problems have been addressed and that the current management has improved. Ushe has said the CCC doesn’t have the cash to pay for an audit.

That means the organization’s cash flow is now short both the fourth quarter funding as well as the first quarter of the current fiscal year – $137,500, which was being counted upon for spending that has already occurred.

CRA Executive Director Jeff Costello said Wednesday that more Arts Garage financial records were turned over to the CRA at 3 p.m. and staff will begin reviewing it. If the material answers the agency’s questions, the CRA board can meet in special session to decide whether to release the fourth quarter funds. But the application for the 2015-2016 funding remains in limbo pending the audit.

Starting in fiscal year 2011, Arts Garage had total revenues of $247,271. That grew through fiscal 2014 to $1.56 million. Of that total, $819,000 was earned revenue meaning tickets sales and other sources; $466,000 was contributed from various sources including grants and the pledge of $275,000 from the CRA. The CRA contribution was about 18 percent of its revenue in the past fiscal year as opposed to 41 and 39 percent in previous years.