Bernstein Celebration At FAU; Includes On The Town Concert 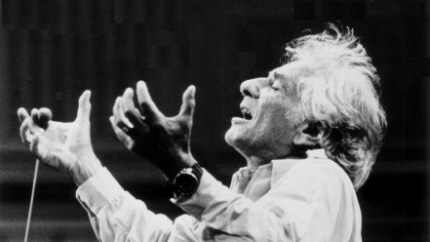 The Spirit of America Festival is presenting a salute to the work of Leonard Bernstein Saturday through Monday including a staged concert version of his Broadway musical On The Town at Florida Atlantic University in Boca Raton.

The first event is an in-depth conversation with Bernstein’s daughter, Jamie Bernstein, at 7:30 p.m. Saturday in the Wimberly Library. The narrator, writer and broadcaster will be interviewed by Aaron Kula, director of Music Performance & Education at FAU, about her family, the evolution of her father’s creative process, and carrying on the Bernstein legacy into the 21st century. The presentation will also include images of her life “growing up Bernstein.” The event includes a meet-and-greet reception and special viewing of rare materials from FAU Libraries “Marvin and Sybil Weiner Collection” and “Harold L. Glasser Collection.” Tickets are $25.

The second event at 3 p.m. Sunday is the production of On The Town in its 70th anniversary year. The show slated to be revived on Broadway next season tells of three sailors on a 24-hour pass in New York City where they try to find romance and adventure in one day. Kula will lead a 50-piece orchestra and a cast of seven actors including Jeffrey Bruce as the narrator. The production will be held at the  FAU-Carole & Barry Kaye Auditorium. Tickets are $20 to $2.

The last piece is a recital entitled Bernstein On Broadway at 7 p.m. Monday. It illustrates the wide-range of his work for theater ranging from West Side Story to Mass, Candide to Wonderful Town. The artists include Christina Zimmer, soprano; Mark Sanders, tenor; Mia Vassilev, piano, and providing commentary will be Bill Hirschman of this website.