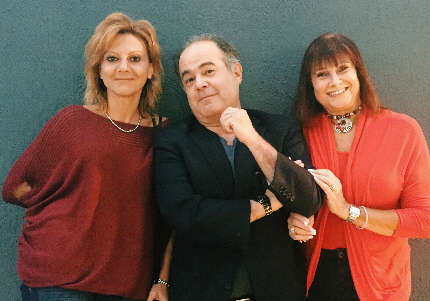 But the new venture essentially “absorbs” both the Boca Raton Theatre Guild, which opened in 1987, and, temporarily at least, Primal Forces Productions, which just completed its first season in Fort Lauderdale.

Some observers worried in March when Louis Tyrrell, founder and artistic director of Theater at Arts Garage, closed his operation after four years as a facet of the larger venue. But news accounts of Tyrrell’s departure prompted Garsson to contact Alyona Ushe, president and CEO of Arts Garage, Garsson said in an interview.

Garsson ran the Boca Raton Theatre Guild, a community theater turned professional company that specialized in mainstream pieces.  Croft directed many of their productions. Its last production was Tuesdays With Morrie in March. The troupe most recently performed at the Willow Theatre in Sugar Sand Park in Boca Raton. Croft also was co-founder of The Women’s Theatre Project, which played in the same space and closed in February.

But Garsson, who directed productions for the Guild, wanted to do more challenging productions and created Primal Forces Productions this past season. It mounted three shows including the acclaimed Sunset Baby, all presented at the tiny Andrews Living Arts venue in downtown Fort Lauderdale.

“We finally have our own theater,” Garsson said Thursday. Multiple companies that have performed at Willow Theatre have said that working with the City of Boca Raton has been quite difficult, such as being prohibited from giving out free tickets and several other challenging restrictions.

The new shows will be financed by Arts Garage which also presents varied concerts, staged radio plays and art exhibitions. By taking over the administrative duties, the new arrangement frees up Garsson to “focus on getting shows up as opposed to splitting our focus on box office and marketing,” he said.

With 200 seats in the main stage area and as many as 100 in the reconfigurable black box, Arts Garage gives Garsson about twice to the space he worked with in Fort Lauderdale and more than the 155 seats at Willow Theatre.

Primal Forces will technically disappear as a producing company, but will remain a continuing entity in case Garsson and/or Ushe want to produce shows at other venues, he said.

The schedule set for next season’s Theater at Arts Garage features dark and edgy fare, even more so than Tyrrell who staged primarily new works-in-progress, much as he had on a larger scale at Florida Stage.

“The dark-themed material of Primal Forces is a natural fit for the off-Broadway feel of Arts Garage,” Garsson said in a news release. “Boca Raton Theatre Guild and the Willow Theatre served us well for many years, but it’s time to move on from our standard fare at the park into a venue more attuned to the material we’ve presented at Primal Forces.”

“The move to the Arts Garage will allow us to unleash new artistic visions as we create imaginative, and thought-provoking plays and musicals” Croft said. “We look forward to new energies and rhythms on the stages of Arts Garage.”

The new season is slated to be:

Written by one of the writers of House of Cards, the comedy opened in New York in 2014. The plot is described as: “When twenty-something star sex blogger and memoirist Ethan tracks down his idol, the gifted but obscure novelist Olivia, he finds they each crave what the other possesses. As the attraction turns to sex, and they inch closer to getting what they want, both must confront the dark side of ambition and the near impossibility of reinventing oneself when the past is only a click away.”

The 2010 psychological thriller tells of a sculptor with an unusual specialty. She meets a woman desperate to recreate her past leading to some frightening revelations. Art and life become disturbingly interchangeable in this dark comedy that takes an unsettling look at work, latex and the power of creation.

March 4-20
The Devil’s Music: The Life and Blues of Bessie Smith by Angelo Parra and Joe Brancato
Previews: Feb. 27, 28 and March 3

This bio-musical ran in New York and then received a production at Florida Stage. This rebuilt from scratch production features such standards as “T’aint Nobody’s Bizness If I Do” and “There’s Gonna Be A Hot Time in the Old Town Tonight.” The turbulent story focuses on the legendary “Empress of the Blues,” whose life was as large and as outrageous as her talent. The play re-imagines Bessie’s final electrifying evening after she and her band are turned away by a whites-only theatre.

This entry was posted in News and tagged Alyona Ushe, Genie Croft, Keith Garsson, The Theatre At Arts Garage. Bookmark the permalink.