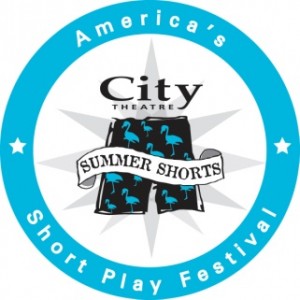 City Theatre will begin accepting ten-minute play scripts next month for consideration for production in its annual Summer Shorts festival, highlighted by its National Award for Short Playwriting.

The competition will result in one winner who will be guaranteed a production at the festival and many as 15 finalists whose work will be considered for inclusion, said Susan Westfall, literary director.

The winning play, which will produce royalties for the writer, also earns the playwright an expenses-paid trip to Miami for the CityWrights Professional Weekend for Playwrights that coincides with the festival in June, plus a cash prize.

The other finalists will receive free tuition to CityWrights, a weekend of professional development for playwrights. All scripts will be forwarded for consideration to the Samuel French Off Off Broadway Festival.

Westfall wrote, “…we know what we want; scripts that are lively and timely, hilarious and thought-provoking, poignant and dangerous. We look for plays that span style and genre. We will consider bilingual scripts and ten-minute musicals. We have no restriction on the age range of the characters. In other words, for us to consider a script for production, we are seeking compelling plays that rise above the ordinary. “

The rules and criteria include

## Plays will be accepted only during the window of August 15 to a postmarked date of October 31.
## Each playwright may submit only one script.
## No scripts will be returned. No SASE required.
## Each script must be no more than ten pages, beginning when the play begins. Number the pages.
## Previously submitted plays and children’s shows are not accepted.
## Previously produced works will be considered, but a production history must be included with the submission.
## Manuscripts must be typed and individually bound or stapled. The title page must include the playwright’s name, address, email address and phone number.
## City Theatre will accept electronic submissions provided all of the contact info and production history is included.
## The volume of scripts submitted prevents City Theatre from providing feedback or criticism.
City Theatre will only contact the playwrights with scripts that the company is interested in producing.  Playwrights with scripts in consideration will be contacted in February-March.

Or email them with all the required contact information to Susan@citytheatre.com.

This entry was posted in News and tagged City Theatre, Summer Shorts. Bookmark the permalink.