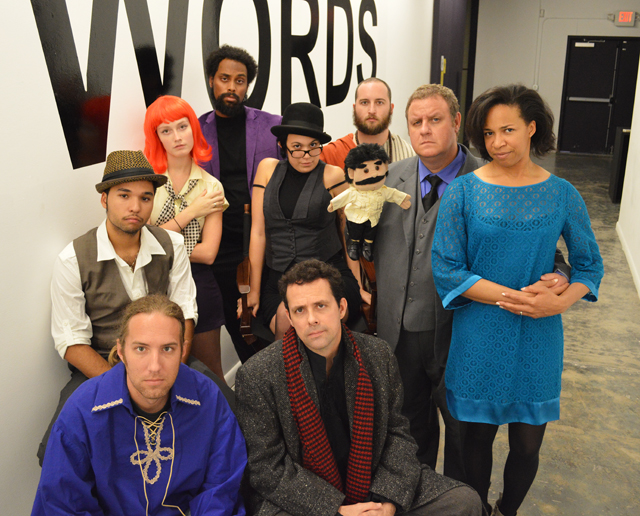 In The Hamlet Dog and Pony Show, Horatio – not Hamlet – holds forth on what theater should be, echoing the sentiments that co-author Paul Tei cited in an interview.

Theater should not be safe, comforting and familiar; it should be an unsettling stimulus for a fresh examination of life and society. Conventional expectations be damned.

Playwrights Tei and Jessica Farr certainly have accomplished that with their world premiere at Mad Cat Theatre Company. This Hamlet is a stylized mashup of Shakespeare, Brecht and 21st Century performance art that examines existentialism versus nihilism by setting the vacillating Dane in a fantasia of modern American politics and power.

Like an atom careening around a chain reaction, it is by turns inventive, self-indulgent, exciting, boring, and, above all, sometimes insightful, sometimes incomprehensible. In other words, it’s a mess. An undeniably entertaining mess, a decidedly thought-provoking mess, but a mess.

The plot closely traces Shakespeare but transports the royal family to America’s First Family in a time of viral videos. Since the playwrights have been inspired by the 20th Century German playwright Heiner Muller and philosopher Martin Heidegger, the show is emceed by a Weimar Republic cabaret performer. Oh, and for all the intellectual musing, this is frequently funny.

Farr and Tei deserve laurels for shoving past mainstream strictures with intelligence and a unique artistic sensibility. But as with Mad Cat’s Macbeth and the Monster and so my grandmother died blah…blah…blah , it’s time to demand less throw-it-at-the-wall invention and more artistic rigor. Doubtless, Farr and Tei can explain the relevance of every moment to its themes. But the relevance isn’t vaguely perceptible to the audience in many moments and even long stretches. Perpetual clarity is hardly a necessary element of theater, but for this dinosaur of a critic, the audience’s comprehension even on an unconscious or visceral level is part of the artistic equation if you want them to connect to your piece.

For instance, one scene features a Cuban-American Laertes whipping up a crowd at a street rally in Miami attended by the Anglo Horatio. The two argue through bullhorns whether Spanish women received proper credit for financing the American Revolution, illustrating a clash of xenophobias. That’s a fascinating historical tidbit and a rare depiction of interracial politics in modern Miami. But it’s relevance to this specific play is murky and goes on far too long if all it’s doing is reflecting a tumultuous social background.

Many of the staging ideas are delicious, such as Hamlet texting his “doubt truth to be a liar” love letter to Ophelia’s cell phone. Rosencrantz and Guildenstern are Skyped in. Secretary of State Polonius is a hand puppet operated by the venal President Claudius. Some ideas, though, go too far such as burying the German emcee under an accent so thick that we can’t understand her.

It not only helps to know the plot of Shakespeare’s tale, it’s nearly essential to following the proceedings. Essential information is never delivered for newbies such as why Polonius is hiding in Gertrude’s bedchamber or what kills everyone at the end.

Familiarity with the original also adds immeasurably to appreciating Farr and Tei’s ingenuity finding parallels between Shakespeare’s tale and our century without simply trying to modernize it. For instance, some characters’ famous lines end up in other characters’ mouths. It’s more than perversity; the new juxtaposition often gives the overly-familiar utterances a revived vibrancy.  Usually, it’s Hamlet saying, “Angels and ministers of grace, defend us!” when he sees his father’s ghost. Here, the line is given to Claudius at the climax of a disingenuous political speech: “Angels and ministers of grace, defend us! And God bless America!”

Easily lost amid the flashy staging is the playwrights’ dexterity with words. Some of the dialogue intentionally deconstructs the Bard by slamming together heightened verse and street vernacular, dropping them in the same sack to fight like cats. More impressive, while a few passages directly quote Shakespeare, Heidegger or Muller, much of the original writing is so smoothly poetic and intellectually profound that you wonder if it hasn’t been lifted from the masters. It hasn’t. That’s Farr and Tei.

Occasionally, everything gets too inventive. Matt Corey, one of the region’s best sound designers, has been allowed to explore what can be done aurally. Sometimes it enhances the production, but sometimes his knowledge of what can be done and what Tei has asked for gets out of hand. For instance, the ghost’s speeches are artistically distorted, but they are also often impossible to comprehend — which would be an almost acceptable choice if they went on only half as long.

The cast is having an infectiously grand old time. Most performances seem comfortable and credible, an accomplishment in this upside down world. But one performance is barely adequate and another actor’s performance is flatter than Oklahoma, illustrating absolutely no feel for the words — when he can be heard or understood.

Back at the top of the list is the ever-dependable Ken Clement as a delightfully slick demagogue President Claudius. Clement is utterly convincing in everything he does, even when he’s operating Polonius the puppet. In the title role, Troy Davidson is as good as we’ve ever seen him. His somber and smart Hamlet has the bulk of the mashed-up dialogue, yet Davidson makes both the verse and vernacular sound plausible.

Christopher Kent plays guitar and bass in the live band with nonpareil percussionist Brian Sayre. But Kent also provides four solid and distinct performances as the leading player delivering a passage from Muller’s play The Hamlet Machine; the grave Fortinbras, the dissolute Osric and the wry Irish gravedigger.

The set design by Sean McClelland and lighting by Melissa Santiago Keenan work wonders with a tiny budget. They create a deteriorating world dominated by a spidery web of ropes enveloping the set.

Acknowledge that Tei has the courage of his convictions to consistently invest his productions with a refreshingly stylistic vision. He creates idiosyncratic work on stage that’s likely pretty close to the images in his head. So the only issue is whether individual audience members can plug into his wavelength. What you can’t argue with is that this, even with its occasional excess and sloppiness, this is theater.