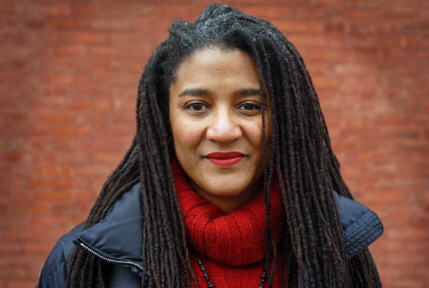 The work of two-time Pulitzer Prize winning playwright Lynn Nottage will be the focus of a series of free live online readings and subsequent discussions this month produced by the Palm Beach Dramaworks.

A cadre of local actors will perform in livestreamed Zoom-based productions of Intimate Apparel, Sweat and Crumbs from the Table of Joy on consecutive Mondays, Oct. 12, 19 and 26, with online discussions on the following Wednesdays.

Other than the seasons of M Ensemble in Miami, the state’s oldest continuing Black theater company, the project marks one of the first times a South Florida theater has concentrated on a series of productions based solely on the work of an African-American playwright. It is also one of the first times a local theater company has zeroed in on a single playwright much as Signature Theatre does in the New York City.

The first will be Intimate Apparel at 7:30 p.m. Monday October 12, which was mounted by GableStage in 2006 and is scheduled for a full production at Dramaworks next season.

The story is described as “In this heartfelt and heartbreaking work set at the turn of the 20th century, Esther is a 35-year-old African-American seamstress of exquisite intimate apparel who aches to love and be loved. An unlikely opportunity arises when she enters into a correspondence with a man she’s never met. The play is a lyrical exploration of loneliness and longing, sweet dreams and bitter truths, determination and resiliency.”

Sweat, which won the Pulitzer Prize in 2017, will be directed by Belinda Boyd and is slated for 7:30 p.m. Monday Oct. 19 with an online discussion on Wednesday. The epic-sized stage production was described as “lives, friendships, hopes, and the American Dream unravel … when the plant that has long employed a tight-knit group of factory workers debilitates their union. Set in blue-collar Reading, PA., this searing and compassionate play is an all too timely and realistic cri de coeur on racism, the demonization of immigrants, and the disenfranchisement of the working class.”

Crumbs from the Table of Joy (1995), to be directed by Reginald L. Douglas, will be produced at 7:30 p.m. Monday Oct. 26 with a discussion the following Wednesday.

The story is described as “Following the death of his wife, a disconsolate Godfrey Crump moves with his daughters, Ernestine and Ermina, from Pensacola, FL., to Brooklyn in 1950, after coming under the spell of a radio evangelist. Seventeen-year-old Ernestine is our guide through this warm memory play, a coming-of-age tale in which the sisters confront a cultural and racial divide and are challenged with new ideas including communism and interracial romance, as they seek to break free from their father’s restrictive rule.”

“Throughout this pandemic, we’ve given a lot of thought to how we can best continue to bring live, quality theatre to our patrons,” wrote Producing Artistic Director William Hayes. “Since April, we’ve been doing Zoom readings of new plays, works that are still evolving, and have developed a loyal audience. And we realized that not only could we expand our content, but we could use this time to do things that we could not do during the course of a normal season, like offer multiple works by a single playwright.”

He wrote that the theater looks for diversity in its play choices during the regular season. “But doing one-time only readings, we can offer many more plays and have the luxury of delving into the work of a single playwright for a month. Thanks to Zoom, we also have the ability to hold a discussion about each play a few days after each reading because audiences don’t have to travel anywhere to participate.”

Dramaworks becomes one of the first local companies to respond in its programming to the nationwide criticism this spring that many mainstream theaters suffer from a decided lack of diversity in myriad areas, including the work being produced and the artists hired.

Hayes wrote, “Certainly, at this moment in time, we’ve become more aware than ever before how important it is to hear from a range of voices and viewpoints. We’re starting with Lynn Nottage because she’s the only female playwright ever to have won the Pulitzer Prize for Drama twice. As our online season progresses, we will be showcasing additional playwrights.”

Tickets to the readings and discussions are free, but reservations are required. Tickets for Intimate Apparel can be reserved beginning Tuesday, October 6 at www.palmbeachdramaworks.org or by calling the box office at 561-514-4042, ext. 2.

This entry was posted in News and tagged Lynn Nottage, Palm Beach Dramaworks. Bookmark the permalink.