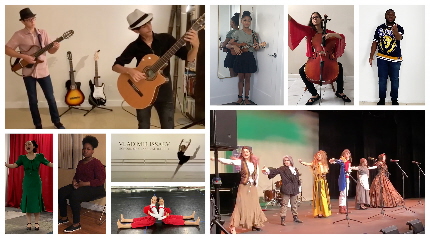 The finals were held on YouTube Live on Sept. 26 and can be seen at the theater’s website www.actorsplayhouse.org.

Prizes for the competition held in concert with The Children’s Trust ranged from master classes and performing arts scholarships to cash awards and performance opportunities. This year, courtesy of WSVN CH7, the grand prize winner also received a free trip – including airfare and hotel – to attend the Teen Choice Awards in Los Angeles, plus $500 cash.

The competition, which began in January, had just wrapped up its second round of live auditions when the pandemic hit South Florida, forcing the competition to shut down all in-person events. But organizers would not let COVID-19 close the curtain. The competition then went virtual, with hundreds of young performers vying for a chance to win by submitting preliminary round audition videos that showcased their talents. Participation was free and limited to residents of Miami-Dade County. The competition featured a total of six individual categories: pop/rock/rap vocals, musical theatre/jazz standards/classical vocals, dance, musical instrument, original spoken word and original vocal and/or instrumental composition. Group categories (six or fewer members) included dance, musical instrument/bands and vocal groups.

This entry was posted in News and tagged Actors’ Playhouse at the Miracle Mile. Bookmark the permalink.