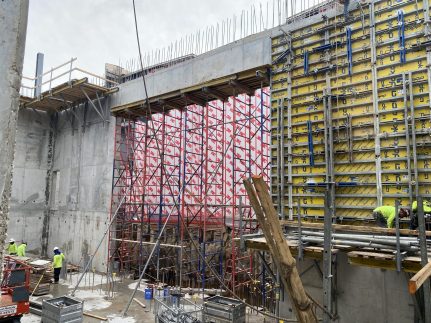 The show must go on, and it absolutely will, assures Maltz Jupiter Theatre chief Andrew Kato. But not quite as first expected in the early months of the pandemic.

The first show of the season won’t be inside the theater under construction. The Maltz’s locally-produced season opener of Jersey Boys will be held in the Roger Dean Chevrolet baseball stadium in Jupiter.

The bow will be in January not October as once planned. Therefore, the schedule of mainstage shows will have four titles not the usual five because of the reduced time frame of the season. Permanently spiked is How to Succeed In Business Without Really Trying, the massive show that was only hours away from opening when COVID shut down the theater world in March 2020.

All these measures and more reflect the Maltz’s agile efforts to reopen a major season while negotiating the fiscal and logistical challenges of the pandemic as well as reopening the main facility after a $36 million two-phase expansion, and the hope for a $10 million phase three.

The hitch is that while the work on the building is making steady progress, it is three months behind its original schedule

“The pandemic and the build-out have created challenges for us to kind of negotiate when is the proper time to come back,” said Kato, producing artistic director and chief executive.

“The Roger Dean Chevrolet stadium gave us a little more time to get back into the building and get things up and running.” The company is wryly referring to the outing as the “Maltz Without Walls” series.

“Anyone who’s been to outdoor theater knows the magic of seeing a show outdoors whether it’s the Delacourt (in Central Park) or the Muny (in St. Louis). And Jersey Boys is about a pop group and it feels like concert it many ways. It lends itself well to an outdoor stadium production,” Kato said.

The second show of the season, Paul Rudnick’s comedy I Hate Hamlet, will also have a temporary home in February, in the well-appointed 800-seat auditorium at the Benjamin School, a private school in Palm Beach Gardens.

Finally, the newly expanded and expansively renovated theater will welcome the third and fourth shows of the season, the musicals Sweet Charity in February, and Dirty Rotten Scoundrels in March, as well as its usual run of short-run concerts, mostly tribute rock bands.

SIDEBAR: For a full description of the titles, dates and ticket information, click here.

Current plans do not call for social distancing because, as most large halls have found in budgeting, the economics won’t support a production with a half-empty auditorium. But the company will institute precautions such as UV light in air handlers, and hands-free toilets and sinks. While the company is blocked by the state from requiring patrons be vaccinated, rules from the Actors Equity union require a raft of such measures backstage.

While the curtain raising is months off, the Maltz is beginning the process of returning to its operational status as one of the most high-profile companies in the state.

When the pandemic hit, the company reduced its full-time staff from 40 to 12 as part of an 80 percent cut in its $8 million operating budget. Now it needs to fill those empty slots even though many of their alumni have found new full-time positions – and current competition for office workers and artistic designers and stage crews is tough. The search has begun now because “it takes time for people to learn your culture; they have to learn the business model,” Kato said.

Subscriptions have just opened, but the company had to deal head on with the fact that its 8,000-plus list of paid up patrons didn’t get to see How to Succeed. The staff sent out about 4,000 refund checks to patrons last week with a value of $620,000. The hope is that patrons will either void the check, donate the loss or accept credit for future shows – and get their names on a donor wall.

PPP loans, donations, grants, an endowment fund and a talent for thrifty budgeting have kept the theater solvent, Kato said.

But a major focus every day centers on the construction project. Among the reasons for the delay is that the building requires a large amount of scaffolding and trusses holding up the roof and walls. Another is the need to sink 300 columns into the sandy ground 900 yards from the ocean with 90 columns sinking 100 feet – the equivalent of a 10-story building. (To see time-lapsed photos of the work, click here and click on time lapses)

Highlights of the expansion include a new larger stage to allow the 659-seat LORT B+ theatre to qualify for a pre-Broadway or national tour development production, three floors of state-of-the-art production facilities with floor-to-ceiling glass windows, a new lobby and redesigned entrance.

Financially, the company always had several fiscal scenarios for the project and the current costs seem to be within budget — $4 million for the overhaul and expansion of the parking lot more than a year ago and the $32 million for the current construction, Kato said. The original projection was an estimated $30 million.

Donations to date include a $5 million top-off grant from philanthropists and founding board members Milton and Tamar Maltz, who stepped in to offer the remaining funds required to complete the work this season, in addition to the $5 million matching challenge grant through The Milton and Tamar Maltz Family Foundation previously granted to the project.

The third phase – a 199-seat black box theater for less traditional fare than the mainstream titles the theater currently favors, remodeling and expanding the Goldner Conservatory, and creating the Scene Cafe – remains on the drawing board while the company continues its fundraising efforts. The company took out a $6 million loan and hopes to raise another $4 million to finish the last facet. But the current construction already includes the walls, air conditioning, sprinkler system and other elements to house those last facets. Kato is optimistic that when patrons see the new venue, they will be inspired to donate toward the last section. Those projects might not be completed and operational until 2023.