Ring! Ring! The Mormons Are Coming To The Kravis Center 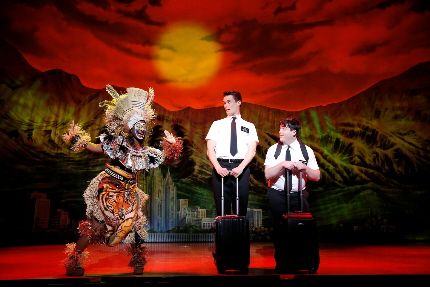 The Book of Mormon, the irreverent and wildly popular musical that has been a hit in New York and on the road, was unveiled Monday as the headliner in the 2014-2015 Kravis on Broadway season. It’s joined on the schedule by Rodgers and Hammerstein’s Cinderella, Flashdance, Anything Goes, Memphis and the reimagined revival of Pippin.

Having played the Broward Center this season and slated for the Arsht Center next season, Mormon’s stop at the West Palm Beach venue will mean one of the hottest tickets on Broadway – still playing at 102 percent of capacity in New York – will have appeared in all three South Florida counties.

This marks the seventh year that the Kravis Center has programmed its own slate of national tours rather than rely on what’s offered by Broadway Across America, said Lee Bell, the Kravis Center’s Senior Director of Programming.

Nov. 11-16:  Rodgers & Hammerstein’s Cinderella – Not be confused with Giuseppe Verdi’s Cinderella or The Gershwins’ Cinderella or Wes Craven’s Cinderella, the musical adapted from the famed Julie Andrews/Lesley Ann Warren television specials is blessed with a terrific score. But the revival creators have spruced up the script considerably and added some stunning visual moments such as when Cindy’s rags turn into a ballgown before your eyes.

Dec. 16-21: The Book of Mormon – Just in time for the holidays. If you missed this smash musical on Broadway or during its highly successful stop this season at the Broward Center, here’s another chance to revel in this nose-thumbing that ribs organized religion (yet oddly admiring of faith in general) as envisioned by some of the minds behind the television show South Park and the Broadway show Avenue Q.
7th

Jan. 27 – Feb. 1: Flashdance – The Musical—  Yes, it’s a musical based on the film about a girl, a welding mask and leg warmers. God, she’s a dancer, a dancer somersaults and splits. When it played at the Broward Center a year ago, this reviewer wrote, “With hardbodies gyrating in knife-sharp choreography to infectious music, Flashdance The Musical is a happy surprise in which undeniable skill, energy and talent trump material about as subtle as sledgehammers bashing steel plates into shape.” Features energetic choreography to the pop 40 songbook from the film.

March 10-15: Anything Goes — With a Cole Porter score this good, it’s not a surprise that this show has been revived over and over. The list includes “I Get A Kick Out Of You,” “You’re the Top,” “Blow Gabriel Blow” and the title song. This iteration is the 2011 Tony winner for Best Musical Revival and Choreography.

April 7-12: Memphis – One of the big surprises of the 2009-2010 Broadway season, Memphis Is a kick-butt rock n’ roll celebration with an original score, loosely based on a true story about a white disc jockey who pursues a love of the “new” music he discovers in the 1950s clubs of the titular town and along the way falls in love with an African American songstress.

April 28 – May 3: Pippin – One of the most beloved musicals among Broadway Boomers got a radical makeover two years ago as a tale set among circus performers in this revival reinvented by director Diane Paulus who did similar duties on Hair and The Gershwins’ Porgy & Bess.