Area Stage’s This Is Our Youth Examines A Lost Generation 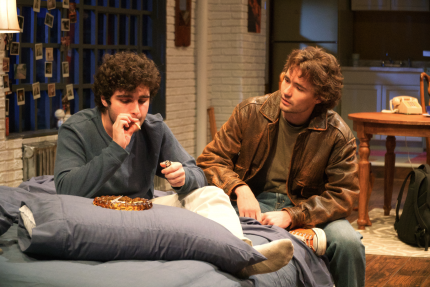 Come with playwright Kenneth Lonergan and Area Stage Company as they travel back in time circa 1982 on a Margaret Mead-like archeological expedition to explore the sociological jungle of Manhattan as born-rich 20-somethings give birth to the Me Generation.

Watch pot-selling, coke-sniffing young adults adrift with angst, anxiety, loneliness and the unspoken fear at the buried knowledge that they have no idea who they are or what kind of future they will have – or, more importantly, that they want.

We visitors from the future observe from a viewing platform entitled This is Our Youth. Accusatory resonances echo since many theatergoers may have lived through this period, even though they themselves might not have been the creatures on display.

Oh, we forgot to mention: This perceptive 1994 drama about maturity, connection, loyalty, relationships and several other themes, well, it’s a very, very funny comedy and filled with distanced compassion for the creatures on display.

Area Stage, now performing in the studio theater inside the Arsht Center, has once again mounted a thought-provoking yet entertaining evening that will stick to the inside of your consciousness well after the ride home.

Director and company co-founder John Rodaz leads a trio of skilled actors in creating the sense of real people flailing around in front of you, even though the script by Lonergan (Lobby Hero, The Waverly Gallery) imbues the play with impossible non-stop tirades drenched in obscenities and verbal abuse that are almost lyrical.

The story is set in a loft apartment on the upper west side of Manhattan occupied by Dennis, a tightly-wound 22-year-old stoner who has been dealing drugs for about five years but whose wealthy painter father pays the rent. He’s visited by fellow college dropout, Warren, a nervous mensch thrown out of the home of his physically abusive lingerie tycoon father.

Dennis constantly and harshly belittles Warren about everything including his limited experience in sex. “An annoying loudmouthed little creep” is one of his more gentle endearments. Yet we sense that there is an Odd Couple co-dependent relationship that stops short of what we might term friendship. Aimless other than to get high and laid, they have little steering them other than a drive to reject their parents’ elite lifestyle and the whole Reagan Era ethos.

On his way out of the family manse, Warren has stolen $15,000 in cash from his father. Dennis sees this as seed money for a major drug deal. But this is just the beginning of a complex somewhat inept series of plans to score a small fortune while figuring out how to return or pay back Warren’s father’s money.

Thrown into the mix is Jessica, a friend of Dennis’ on-again off-again girlfriend. She is intelligent, insightful and quite pretty; Warren is smitten and tries in his preternaturally awkward way to connect. But she’s defensive about the offer of a genuine relationship.

In a quirky get acquainted episode – he’s reaching out, she’s trying to be aloof — Jessica reflects the uncertainty and pessimism all three feel about the future, and her words form a reprimand for a 21st Century audience of grownups.

“No, like the classic example is all those kids from the Sixties who were so righteous about changing the face of civilization, and then the minute they got older, they were all like, ‘Actually, you know what? Maybe I’ll just be a lawyer.’ …. Like right now you’re this rich little pot-smoking burnout rebel, but ten years from now you’re gonna be like a plastic surgeon reminiscing about how wild you used to be… and it’s really depressing… because it basically just invalidates whoever you are right now…. It just makes your whole self at any given point in your life seem so completely dismissible. So it’s like what is the point?”

This is a generation that has rejected everything about its parents’ milieu but have yet to find anything of value to hold on to; they are flailing around in subterranean desperation while pretending not care about anything. Much of the show is paced by the unleashed torrent of verbiage, some of it lacerating, all of it dripping with poorly concealed pain.

By the end of the evening, we will see all three acknowledging signs of their predicament and reacting in fear of the void.

All three actors did serviceable work earlier this year in Area Stage’s production of the cult musical Be More Chill, but nothing they did there prepares you for their multi-dimensional portrayals here of people stumbling and thrashing in search of something they cannot even name.

Teddy Calvin makes Warren a likable schlub who wants something better but has no idea what that might be. He exudes a hapless puppy dog quality that makes him the loyal serf to Dennis who has compassion for no one. His quirky inability to fit in anywhere, family or friends, makes him someone credibly in trouble one way or the other all the time.

Harley Muir makes a lovely Jessica who has a city-bred protective shell of seeming uncaring or committed to anything or anybody, but quickly reveals a soul longing for something.

But it’s Luke Surretsky who drives the evening with the speed and power of a runaway Brightline express. Somehow he and Rodaz make Dennis’ 11th hour seemingly endless spleen-venting monologue an impossible torrent of fear metastasized into words. But until the last moments, Surretsky’s Dennis exudes self-confidence bordering on arrogance, especially taking ego-building satisfaction from mercilessly putting down Warren. And yet Surretsky somehow communicates that this is all a front.

Rodaz’s direction in pacing and phrasing is a marvel in injecting considerable character-based humor and the multiple levels of meaning that Lonergan has infused in the work. He also injects considerable physicality in the word-heavy proceedings: people pace the apartment, throw things, toss a football, leap onto the bed.

Set designer Frank Oliva sets these characters down in a downtown brick-lined loft equipped with sports trophies, an unmade bed on a mattress with no frame, period audio equipment and (mothers will recognize this) clothes sticking out of the bureau drawers.

It’s a fascinating intense examination of people rebelling against the status quo – from loving relationships to financial independence — but who have no idea what to replace it with.

This is Our Youth from Area Stage Company runs through May 1 in the Carnival Studio Theater at the Arsht Center’s Ziff Ballet Opera House, 1300 Biscayne Boulevard, Miami. Performances are at 7:30 p.m. Friday-Saturday, 2 p.m. Saturday, 5 p.m. Sunday. Running time 2 hours including one intermission. Tickets $60, Students $30, discounts available for groups. Visit AreaStage.org or www.arshtcenter.org.

If it’s been a while since you’ve been to the Arsht, much of the closest parking has been shuttered and co-opted for construction. Come early to find parking which is not cheap. Further, driving to and from the Arsht from I-95 via I-395 is a nightmare of corkscrews. Allow extra time for travel. Parking options and directions are spelled out on the Arsht’s website at https://www.arshtcenter.org/en/Visit/Parking-And-Traffic/.
Covid protocol: Proof of vaccination or recent testing is no longer required.  Masks are recommended but not required. 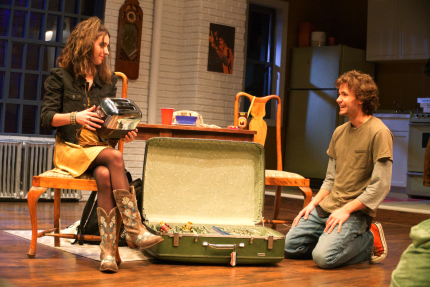