A Musical Beauty ‘Pageant’ Like None You’ve Seen – Probably 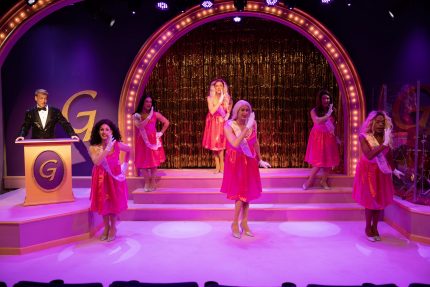 The six queens who were divorced, beheaded, and resurrected for the musical phenomenon, Six, are not the only half dozen royal women visiting Southeast Florida.

The other six in the region are actually beauty queens competing in the Miss Glamouresse Pageant. Chances are, you will like them. After all, how could you not like, for instance, Miss Texas. She proclaims, “I believe that a person is never so beautiful as when she stoops to help someone less fortunate.”

And then there is Miss Industrial Northeast. “I believe that beauty is a rainbow. Does purple hate red? Does yellow tell orange not to move in next door? Does blue bash green and call it ugly names? Of course not! Let’s take a lesson from the rainbow and allow all our colors to live side by side in harmony – like people.”

After hearing all that, you would probably expect a rendition of the song, “Kumbaya.”

While that song is not part of Pageant, the Musical, there is enough solidarity in the show to ensure that the contest remains competitive, yet friendly.

In its production program, ICS subtitles the show “The Musical Comedy Beauty Contest.”

That is because the show’s creators have structured it just like a beauty contest. However, there is one main difference between this and other similar events. Specifically, male actors portray the female contestants.

Obviously, the characters are not drag queens. And, under director Ron Hutchins’ astute guidance, cast members do not portray them as such. Instead, the actors imbue their performances with an impressive naturalness, honesty and specificity. To their credit, the actors let the comedy rise from those qualities, instead of showing off and begging for laughs.

If you attend a performance, there is a chance that you could serve as one of the judges; for each performance of Pageant, the presenting company randomly picks judges from the audience. Those lucky patrons sit in the front row, although there is hardly a bad seat in ICS’s intimate space.

By the way, Glamouresse is a fictional cosmetics company which runs the competition in the show. Therefore, contestants help publicize the company by advertising one of its many unusual and useful products. Let’s just say that, chances are, you will not be able to find them in your average cosmetics store.

While the contestants praise Glamouresse’s products, compliments are in order all around in ICS’s production. From the fine acting, singing, and dancing to the solid direction, and other behind-the-scenes elements, including musical accompaniment, ICS’s Pageant is a roughly 90-minutes of engaging live theater.

Praise is also due the piece’s writing. For instance, lyricists and librettists Bill Russell and Frank Kelly’s lyrics cleverly rhyme, such as when the host, Frankie, sings of the contestants: “You’ve got it all, plus something extra, a certain style, a certain flair, a certain glow that puts the “OH” in Deb-O-Nair.”

At another point, Miss Bible Belt sings: “I’m banking on Jesus, and when I face that burning shrub, while others meet Beelzebub, I’ll cash in my Christmas Club.”
No doubt, Miss Bible Belt is a strong female character, as are the others. Together, they sing of “Girl Power” in strong solidarity. Also, when they dance, they do so in unison with confident, strong moves. Certainly, these are sights and sounds that are especially welcome during a time when female empowering advocates are vocal and taking action to stand up for their rights.

And with divisiveness plaguing society today, it is especially refreshing to hear words such as the following from Miss Deep South: “I believe in traditional gentility, modulated tones and graciousness of manner. If the governments of the universe would lay down their guns and pick up the correct fork, the solar system would be a more beautiful place in which to live.”

Speaking of where we live, Pageant includes a strange song that foresees a future on a different planet.

“Do you fret about your beauty future?” our host, Frankie, asks. “Do you wonder how Glamouresse will meet the challenge of looking good in outer space?”

The scene and its accompanying song seem extraneous, although it does provide the actor portraying Frankie with a chance to strut his stuff. The performer sings and dances to the song “It’s Gotta Be Venus,” clad in an outfit which includes a helmet an astronaut would wear.

Larry Buzzeo, a Southeast Florida actor who is no stranger to dressing as women for the stage, here plays host Frankie Cavalier hardly with a cavalier demeanor. Rather, Buzzeo believably presents a genial host who is also happy with the attention so many are heaping on him. In addition, Buzzeo’s host, smiling ear to ear at times, is also a flashy, charismatic MC who is a strong singer and moves well.

Other performers believably conveying strong personalities include Christopher Calhoun as Miss Bible Belt, Ruth Ann Ruth. Calhoun injects his character with strong conviction without coming across as hostile or close-minded. His Miss Bible Belt speaks in a strong, preacher-like voice, but also radiates the kind of joy that might suggest the character is newly saved.

There is no shortage of joyfulness onstage. Indeed, these characters seem to be generally happy, charming people who believe strongly enough in one or more causes to take action to improve the world.

“It means even more to me than my acting,” she says.

The host asks why.

“Because acting can make people forget their pain for a little while, but cancer research can make them forget it permanently…eventually…maybe.”

Of course, an actor can only do so much to make his or her character likable. Sometimes characters exhibit beliefs and traits that are sure to raise eyebrows. In Miss Deep South’s case, she is “the only one of the contestants (she believes) who knows that in order to be a winner, a lady always has to come in second to her man,” according to a character description in the script. Such an attitude seems out of sync with the female-empowering mood of the piece.

Just as Miss Deep South seems loyal to her region, Miss Texas, Kitty-Bob Ames, seems devoted to her home state. In the role, Conor Walton speaks and moves with conviction and pride.

Meanwhile, Marcus Davis plays Miss Great Plains, Bonnie Louise Cutlett, with touching sincerity. She is surprised that she won her region, something which was “beyond her wildest dreams.”

Buffalo’s Miss West Coast is sweet-natured without being syrupy, and Veloz turns in a spirited performance. The latter speaks in a convincing accent as the contest’s only Hispanic contestant.

The actors are not the only ones in motion. In addition, the lighting equipment moves, lending extra energy to this production. Preston Bircher designed the mood-enhancing lighting, while W. Emil White designed appealing, character-defining costumes, some of them glistening.

A couple of times during the reviewed performance, the sound cut out. However, mostly it was easy to hear the performers, thanks to sound designer David Hart’s work.

It’s not often that you get to see two sets of queens in two shows playing in the same region at nearly the same time. But folks in Southeast Florida have that chance. Specifically, beauty queens (Pageant) and royal queens (Six) await you.

Island City Stage’s production of Pageant runs through Nov. 20 at ICS’s intimate theater, 2304 N. Dixie Highway in Wilton Manors. Tickets are $50 for Thursday and Friday performances, $55 for Saturday and Sunday performances, and $60 for Mimosa Sunday, which falls on Oct. 30. For showtimes and more information, go to www.islandcitystage.org.