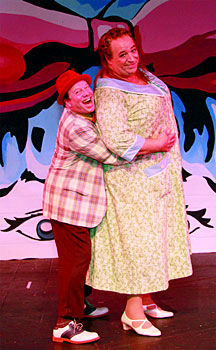 The tragedy of Actors Playhouse’s lavish and ebullient production of the musical Hairspray is how the muddy, uneven, out of balance, sloppily cued sound on opening night fatally sabotaged what might have been a triumph.

Despite two days of previews, the sound quality was such a mess – smudging some of the wittiest lyrics since Sondheim into unintelligible mush — that some theatergoers wished they could return when the problems have been solved.

Perhaps then it would be possible to fully appreciate the energy, enthusiasm, theatrical skill and money that the cast, musicians, designers and producers invested into this perfect match of material to a company known for mainstream musicals. But as it is, the show lacks the necessary knife-edge crispness and infectious zest.

I’m not knowledgeable enough to diagnose whether this is human error, mechanical malfunction, permanent acoustical problems with the house or not enough tech time to calibrate the system. But this is hardly the first or fifth time the same thing has happened here on an opening night at Actors Playhouse.

That means evaluating this hilarious satire on the music and mores of the early 1960s has to be done through undependably foggy glasses. What can be glimpsed is a promising hoot: a vigorous and talented 26-member cast, a solid pit band, glorious choreography and stunningly silly costumes all in service of one the funniest scripts and scores since The Producers.

Of course, the headline is David Arisco, the Kodiak-sized artistic director doing double duty as the production’s director as well as wearing the double EE bra and bouffant wigs of Edna Turnblad.

Arisco faithfully plays it straight, if that’s possible, as the timid laundress who blossoms into self-confidence following the exhortations of her pint-sized daughter, Tracy. Arisco is so careful not pull focus from Tracy, the real heroine of the show, that he incredibly fades into the background in the early scenes – all 6-foot-4 and nearly 400 pounds of him.

But when Edna slips out of her shell in the kick-butt song, “Welcome to the 60s,” Arisco loosens his reins a bit and the character glows with a pleasure that instantly wins over the audience.

He’s especially deft in sidestepping the treacherous pitfalls of playing a woman without winking too hard through the fourth wall. His baritone voice, masculine mug and girth keep the performance appropriately distanced from the half-baked clichés of a female impersonator. Instead, Arisco plays Edna’s growth from someone too self-conscious to leave the house to someone willing to burst onto national television to parade her new-found pride.

But his oddly-restrained performance, as unimpeachable as it is, doesn’t top the list of the show’s virtues. High on that roster is Avi Hoffman portraying Edna’s husband, Wilbur, the gentle and genial joke factory inventor who unreservedly loves a wife who could crush him in one paw. Hoffman’s performance of an irrepressible dreamer is a comic masterpiece. He melds a virtual encyclopedia of vaudevillian bits with perfectly executed line readings and an underlying sincerity of emotion that keeps his broad character from becoming a cartoon.

One of the show’s high points occurs when these two veteran actors have a ball dancing and singing to each other about their undying affection, “You’re Timeless To Me.” Pure hallelujah.

For those living in the Antarctic the past decade, Hairspray is the joy-filled musical which swept the 2002 Tony Awards starring Harvey Fierstein as Edna and based on John Waters’ slyly subversive 1988 film starring Divine.

Its book by Thomas Meehan and Mark O’Donnell is jammed with sly, anarchic one-liners from meta-theater jokes (one girl discovering her beauty echoes Gypsy’s  “I’m a pretty girl, Mamma!”) to digs that only Boomers and their parents will appreciate (Tracy’s arrest is on all three television channels).

And forget Grease as the gold standard for faux rock ‘n’ roll musicals. The score by Marc Shaiman and Scott Wittman might be the best pastiche of ’60’s pop music ever written, featuring homages to everything from gospel-tinged soul anthems to scat singing girl groups.

The plot follows the diminutive but plus-sized dynamo Tracy whose power of positive thinking would make Norman Vincent Peale sound cynical. Tracy sees no real obstacle to her dream of changing the world, starting with the segregation afflicting the teenaged dancers on her favorite show, the Baltimore version of American Bandstand.

Her efforts to bring blacks on the program and win the heart of its Elvis wannabe, Link Larkin, turn her from a social outcast to a rabble-rousing jailbird to a nationally-beloved icon.

Hairspray perpetually ribs the hell out of the quaint period, but it forthrightly proselytizes that people must see past poundage and other externals to love themselves despite what social conventions dictate. That, the writers proclaim, will lead the liberation of society from the straightjackets of racism, sexism and several other isms.

The show would not work without a sparkplug in the role of Tracy. Here, Joline Mujica, a University of Miami graduate who has played the role twice before, hurls enthusiasm across the footlights, especially when dancing. You laugh in spite of yourself when she’s panting like a spaniel and nearly licks Link when he sings a ballad. But here is where the muffled sound undercuts the actor. It’s impossible to tell whether her voice has the powerful drive essential for the part. Her curtain-raising number, “Good Morning Baltimore” should announce here is a character whose vivacity can carry us through the evening. Instead, the show doesn’t find its energy level until the first big dance number, “The Nicest Kids In Town.”

In fact, the two true stars of the production are not performers. Barbara Flaten’s high-stepping, sinuous choreography is synthesized from a dozen senior proms and cheesy telecasts. While some of her dancers aren’t as in sync as precisely she might like, their energy and lithe movements communicate the bliss of late adolescence and new-found sexuality that Flaten intended.

Then there’s Ellis Tillman’s cornucopia of costumes constituting the most wicked yet affectionate satirical statements in the entire show. The massive undertaking, 180 outfits by one count, required many to be specifically designed by Tillman and hand-made by his staff supervised by Dario Almiron. Some were selected with care from costumes shops and adapted by the staff. Tillman’s vision has resulted in a runway parade of garish madras sport jackets, color combinations not found in Nature like chocolate and teal, slinky red sequined cocktail dresses, a rainbow of hair bows, a greenhouse of flower print dresses, gold lame lapels, Edna’s horridly bland housecoats and Wilbur’s outlandish bowties that clash with everything he wears. Did we mention the 70 wigs? Beehives, bouffants, pompadours. The sole mistake was a close-cropped Afro that covered a character’s ears like a knit watch cap.

Kudos are due, too, to musical director David Nagy and his eight-piece band for recreating the glorious score, although they also were battling the sound quality and the unbalanced sound often drowned out the singers.

Incidentally, Arisco knew he could not judge the pacing and staging of his own scenes, so he enlisted the help of Nagy and Flatten to be his second and third pair of guiding eyes and ears.

But back to the cast of 26, including 10 leading and supporting players, each and every one selling the show like they were on commission.

There’s Avery Sommers, the veteran theater performer with the soul of a chanteuse, portraying the rhyme-obsessed record shop owner “from the wrong side of the tracks,” Motormouth Maybelle. If the director allowed it, she’d stop the show with her powerhouse numbers belted from the cellar of her diaphragm — the brassy Detroit paean to self-love, “Big, Blonde and Beautiful” and the gospel-tinged civil rights anthem, “I Know Where I’ve Been.”

Julie Kleiner is delightfully daffy as the congenitally nerdy Penny Pingleton, all awkward arms and elbows, who is transformed by love into a sexy siren. As she did in Actors’ Putnam County Spelling Bee last season, Kleiner’s nearly cross-eyed concentration can make the act of chewing gum into a comic moment.

Matthew Ragas is the self-involved heartthrob Link who has the required singing chops and charisma to seem like a teen idol wannabe. Ronald Duncan’s singing as Seaweed, Penny’s black love interest, was totally lost to the sound board, but his liquid dance moves were eloquent on their own. Christopher A. Kent nails the dance show emcee Corny Collins as a smooth huckster with a Pepsodent smile who is not as much a sellout as you think. Kim Cozort, another victim of the poor sound, is a wonderfully brittle villainess obsessed with class snobbery, and Celia Louise Merendi scores as her equally obnoxious social-climbing daughter.

Special mention is required for perhaps the best singers in the show: Talitha Farrow, Tatianna Mott and the radiant Renata Eastlick whose Motown backup singers effortlessly scat trills and runs and bend notes.

Despite the crippling problems – which may or may not get ironed out by the time you read this — the season opener at Actors’ Playhouse is a bravura, even epic undertaking that has to be applauded.