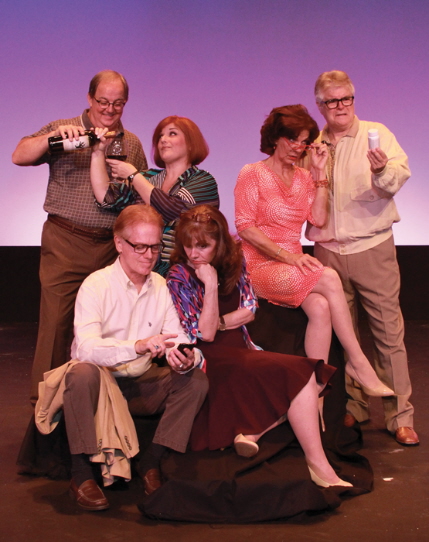 Every summer, the humidity rises, the snowbirds go home and Actors’ Playhouse mounts a fluffy innocuous musical about what modern life is like, featuring doggedly middle-of the-road music, lyrics that range from mildly witty to slightly anemic, and skits better than Saturday Night Live but not much.

These undertakings must be financially successful because not only does this company keep mounting them, but one has actually spawned a sequel: Mid-Life 2: The Crisis Continues, the off-spring of 2008’s Mid-Life! The Crisis Musical.

Continues is an honest word choice because virtually everyone from the writers to the performers are back for another round. Once again, director David Arisco and company have achieved precisely what they sought: a fun, light-hearted divertissement.

But the quality of the material is not worthy of the skill, talent, polish and unflagging commitment lavished on it by Arisco, music director David Nagy and cast members Allan Baker, Maribeth Graham, Margot Moreland, Lourelene Snedeker, Wayne Steadman and Barry J. Tarallo. These folks are troupers.

The strongest element in the script and score by brothers Jim and Bob Walton is my phrase to describe a touchstone of local theater since Flagler: “The Theater of Recognition.” It refers to authors plugging into (or pandering to) the audience’s life experiences or culture as a shortcut to winning over their affection. Yes, this is true of all great theater on a more elevated level, but here usually it’s when a playwright needlessly throws in a Yiddish phrase or a Spanish exclamation to charm a segment of the South Florida audience.

The Waltons do deserve praise for perceptively identifying and riffing on familiar experiences of a generation leaving their 30s and slipping into their 60s. There’s the couple insulted that a ticket clerk offers them a senior discount before they’re eligible. The man who can’t find his glasses because they are on his head. Those grunts we unconsciously utter every time we get up from a chair or bend over. Two men anxiously rebonding after the death of a friend. A couple trying to remember the name of an actor in a movie on television while resisting the urge to Google the answer.

As usual, there’s a few risque bits and lines that wouldn’t offend a nun, such as two men in a doctor’s office celebrating that Viagra has given them that long-lasting side effect that the commercials gleefully “warn” you about.

The Waltons hardly miss a trope or meme (that’s 21st Century language for cliché and stereotype.) Each one is rewarded by the audience with appreciative aahs, nods and nudges.

The problem is these are all set ups and premises. The Waltons have varied results after they posit the basic idea. Some are mildly entertaining and some are pretty darn lame. Certainly, there’s too little meat here for a two-hour two-act production.

It’s all whistling past the graveyard, right down to Gene Seyffer’s set design, which includes the title of each number projected above the stage, except that the letters are blurry until a giant magnifying glass slips over it.

But the material is unfailingly delivered with verve and professionalism, such as poor Moreland gamely throwing herself into a silly number about an embarrassed mother picking out condoms at a pharmacy to ensure that her teenager practices safe sex. Or there’s Tarallo and Snedeker in a weak skit about a device that helps a husband filter out ambient noise in a crowded restaurant.

The best moments are the quiet ones not reaching for laughs such as Snedeker lending her lovely voice to the joys of hearing a single word, “Nana.” Or Snedeker and Steadman recalling their courtship during a visit to the old neighborhood.

Some audience members at Sunday’s matinee were charmed and burbled with pleasure, a few termed it tedious and left at intermission. If you’ve been to these before, you know what you’re getting and you could do a lot worse. At least the folks on stage are a plus.

But my theater-going partner offered a thoughtful alternative: Palm Beach Dramaworks has produced staged concerts of classic musicals for three years now such as Camelot and Man of La Mancha. Each has been thoroughly entertaining and a lot more satisfying than these slice-of-modern-life fripperies. But they still qualify as summer fare that doesn’t strain the audience. Perhaps the finances of the Mid-Life ilk are too profitable and the Dramaworks’ efforts too costly. We don’t know. But we bet that Miami-Dade audiences would embrace either Dramaworks touring its offerings on Actors’ Playhouse’s stage or for Arisco himself to lend his considerable talents to a similar enterprise. Just a thought.