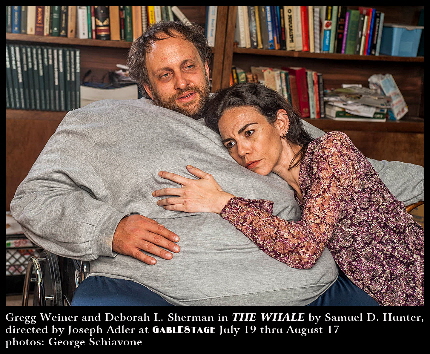 Like the title leviathan rising from the deep, GableStage’s production of The Whale begins with few ripples disturbing the placid surface. It’s even a bit frustrating waiting for the conflict to assert itself. But the vague outline of a behemoth emerges from the muck and it grows in emotional heft until it breaches the surface with shattering impact.

Samuel D. Hunter’s plot focuses on a morbidly obese man wanting to reconnect with his abandoned daughter before his imminent death. But the darkly funny and affecting play — awash in profanity, cynicism, alienation and fatalism — reveals itself to be about hope rooted in the innate decency inside scalded souls. In most cases, characters are struggling not to feel, not to care. To watch them lose that battle is witnessing a victory of their humanity.

The performances molded by director Joseph Adler seem too muted for at least half the play, but as secrets tumble out and stakes intensify, everyone in the cast energizes their characters until the last quarter of the play sweeps away any misgivings. These are finely-tuned performances, not showy bravura turns.

Ultimately, it’s a satisfying production of an engaging script by the hot young playwright responsible for A Bright New Boise and The Few. The Whale touches on elements found in much of Hunter’s work such as unconventional definitions of community, cross-generational family relations, skewering organized religion (a favorite Hunter topic) plus persistent allusions here to Melville’s Moby Dick, and the biblical tale of Jonah. The connection and precise relevance of all these themes (exactly who is the Whale, who is Ahab and who is Jonah) is not crystal clear, but that guarantees some spirited discussion among audience members on the drive home.

Adler and his cast have embraced Hunter’s welcome streaks of gallows humor and dry wit that buoy the tone of what might have been a depressing premise. The experience is uncomfortable, yes, but not a downer.

The protagonist is Charlie (Gregg Weiner), a 600-pound English teacher whose obesity has imprisoned him in his apartment in a small college town in Idaho (Hunter’s home state and regular setting). He teaching a writing course online, speaking to his students with a headset connected to his laptop – but no video. In critiquing his students’ essays, he increasingly presses them to discover their feelings through the process of writing rather than fret about their varied abilities to pen elegant verbiage.

The arrival of his life-long friend and caregiver Liz (Amy Miller Brennan) reveals to us that he is likely days away from death because he has refused to take care of himself. He refuses to go to the hospital, ostensibly because he has no insurance, but really because he simply no longer wants to fight it. Like everyone in this play, he keeps help and comfort at arm’s length because life has taught him not to trust it.

Charlie’s priority now is to bond with his 17-year-old daughter, Ellie. He has not had face-to-face contact with her since she was two years old when he left the family for a loving relationship with a gay man, Alan.

The difficulty is that when Ellie (Arielle Hoffman) begrudgingly visits, without telling her mother Mary (Deborah L. Sherman), Ellie turns out to be an anti-social, disaffected foul-mouthed teen in extremis who perceptively identifies people’s emotional weaknesses and cruelly exploits them to inflict psychological pain.

At the same time, Charlie is repeatedly visited by an impossibly straight-arrow young man, Elder Thomas (Karl Skyler Urban), who, yes, is proselytizing for the Mormons. His sincere desire to help people makes him an irresistible bull’s eye for Ellie’s jibes. But worse, he elicits Liz’s scorn and Charlie’s rebuke because Charlie’s love, Alan, was a Mormon. Alan let himself waste away and die years ago because of the church’s condemnation equating him with Jonah. Charlie was always fat, but he began to eat himself into his current state after Alan’s death.

The play charts the difficult path during which Charlie strives to reach Ellie – seemingly an impossible task – as his condition deteriorates toward certain death.

Several facets keep this from being overwhelmingly depressing or settle into a movie-of-the-week soap opera. First, every character has reasons to feel sorry for themselves but not one exhibits a shred of self-pity, only a melancholy sadness. And all, in their way, care deeply about each other despite betrayals. Second, while all initially seem to be archetypes, each harbors hidden facets that are exposed over time.

Furthermore, all have a talent for expressing themselves with whip-smart wisecracks. At one point, Liz is so frustrated by Charlie’s apologetic refusal of medical help, she says, “If you say you’re sorry again, I’m going to shove a knife right into you.” To which Charlie answers, “Go ahead, what’s it gonna do? My internal organs are two feet in at least.”

This is all underplayed for an hour, which is an intentional choice on Adler’s part to give the piece somewhere to grow, but it may be just a shade too phlegmatic to captivate some audience members. But once Mary discovers her daughter in Charlie’s apartment, the conflicts clash, the secrets emerge and the play grows stronger and stronger until its moving conclusion.

Master costumer Ellis Tillman created a fat suit for Weiner not meant to be comical or cartoonish. Oddly, it’s harder to accept in person and three dimensions the kind of elephantine body that you never doubt when seeing it on two-dimensional television. On the other hand, this is theater and Tillman’s deft work makes it easy to suspend disbelief.

The performances are uniformly solid, starting with Weiner who convincingly inhabits the physicality of a man who must rock in his sofa to get enough momentum to stand up, who finds walking unassisted a challenge, who is easily winded and who is doomed by worsening congestive heart failure.

Weiner has proven over dozens of roles that he can deliver a wide range of emotions, but his style rarely allows him to explode operatically. In keeping with that and doubtless following Adler’s vision, his Charlie is quite subdued for much of the evening. We are meeting Weiner’s Charlie at the end of a long, disappointing journey in which Charlie has already come to terms with his shortcomings, failures and the pain he has caused by his choices. This robs the character of some of the bombast and angst that might ensure that the plot swirls around a vibrant hub. But Weiner and Adler’s choice also makes Charlie more naturalistic, more believable and arguably more effective in the long run, especially in the last scenes when the pathos is unleashed.

Seen locally on stage since she was a young teen, Hoffman has been “promising” but in need of experience as seen in GableStage’s Hamlet and Palm Beach Dramaworks’ The Effect of Gamma Rays On Man-In-The-Moon Marigolds, plus some staged readings.

But here, she zooms past “promising” and delivers a no-excuses no-asterisks performance as Ellie. She and Adler courageously make Ellie a troubled teen covered with an impenetrable coat of razor sharp porcupine needles – as unapologetically and unrelentingly abrasive as Hunter intends. Hoffman creates a misfit who would slice off a hand offered in kindness and only allows a glimmer of humanity underneath. Hoffman is not quite as good in hinting at that hidden decency, but she does it well enough that she makes Ellie’s final scene credible – and that’s impressive. We look forward to her next roles.

Sherman has only one scene, but it’s the second best in the script and she just nails it. Mary comes off initially as an unlikeable furious burned-out alcoholic who anyone would abandon out of self-preservation. But Sherman’s Mary quickly brings us around, making it clear that raising Ellie has been a life-draining nightmare that has destroyed her life. And as much as she is disgusted with Charlie’s abandonment and with him allowing himself to slide into this condition, there is a heart-breaking tableau near the end of the scene in which Sherman clutches at Charlie’s bulk, her pole-axed expression mixing undying love and persistent fury.

Miller Brennan reminds everyone who only thinks of her as a musical theater actress (such as Slowburn’s Chess and Actors’ Playhouse’s Ruthless! earlier this season) that she has the same considerable talent for straight drama. Her Liz is as fiercely protective as a feral creature defending her young. Meanwhile, Urban invests the bright evangelist with an earnest altruism that explains why Charlie allows him to hang around.

In this stretch of South Florida’s summer theatrical season – once an oxymoron in the region – theaters tend to favor lighter fare. Credit GableStage for believing that an audience exists for thought-provoking and touching like The Whale.

To read a feature on the fat suit created by Tillman, click here.