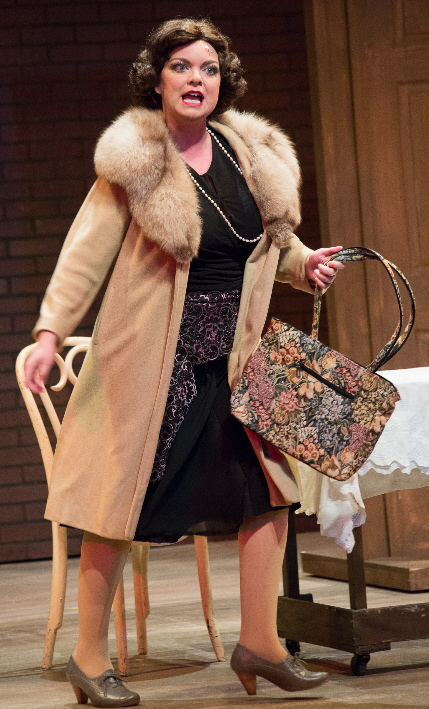 I was near tears at the end of Broward Stage Door’s production of Gypsy at the Wednesday matinee for three reasons occurring simultaneously.

First, the powerhouse performance of Ann Marie Olson in the title role as she nailed “Rose’s Turn;” second, an unrelieved ache to hear one of the finest theatrical scores played by a live band instead of the tracks being used, and three, one of the rudest, thoughtless, self-centered and worst-behaving audiences I’ve seen this season. You couldn’t hear any cellphones going off because of the talking.

Okay, back to the review.

Any production that spotlights Ms. Olson’s golden voice (gold is a good word – warm, strong, low, vibrant, bright) in one of the greatest roles in the canon can be forgiven damn near anything. Ditto for any company that gives us Matthew Korinko’s fine turn as the mensch Herbie and a hilarious trio of over-the-hill strippers in Ellie Pattison, Stephanie Genovese and Christina Groom.

But otherwise, this production is as thin as the tinny tracks and high school quality scenery, and sits there as unenthusing as Electra’s intentionally lackluster bump-and-grind.

Gypsy, as almost all of you know, is simply one of the finest pieces of musical theater written anywhere, anytime. It’s a highly fictionalized account of the childhood and rise of Gypsy Rose Lee under the tutelage of her pile-driving stage mother as vaudeville was dying.

This affectionate but clear-eyed expose of show business, ambition and parents living through their children boasts a deftly-built, multi-layered script by Arthur Laurents, supremely witty lyrics from Stephen Sondheim and a near perfect score by Jule Styne. But it is not foolproof: Even Bernadette Peters and Sam Mendes stumbled with it on Broadway in 2003.

Director Dan Kelley adds some nice touches, such as Mama Rose being visible behind a translucent curtain when Gypsy “strips” the first time. But he cannot get the cast to inject much magic or subtext subtleties in the book scenes. We’re not second guessing the cheesiness of the ambience, which is intentional from the crummy dance routines to the often third-rate costumes.

He relocated the crowd-rousing overture to the curtain calls, so the show opens with the flat Uncle Jocko audition scene, and it doesn’t take off even when Rose strides down the aisle. The audience has a right to fear that this is going to be a long evening.

But then Olson starts to sing the defiant “Some People” anthem to Rose’s father and the whole production catapults. Olson may not have the freight train chutzpah of predecessors Ethel Merman, Angela Lansbury or Patti LuPone, but she combines her glorious warm belt with acting chops so that you never mistake her three-dimensional performance for some nightclub rendition of a standard. Her Rose has been around the block several times, but the power-plant glow from her eyes tells you that she won’t let anything like a few crippling reversals stop her. That said, you might prefer her to be even a tad fiercer and a bit more cluelessly destructive in “Everything’s Coming Up Roses.” But Olson’s climactic “Rose’s Turn” is an unalloyed triumph of bravura acting/singing. It was then our eyes started to moisten when we saw two couples stand up at that exact moment and begin their long loud trek up the aisles. Pearls before swine.

Herbie is one of the thankless roles in musical theater, but Korinko invests him with the essential likability and makes Herbie’s loyalty credible. He’s also got a much better voice than Herbies usually do, making his duets with Olson a pleasure to listen to.

Another highlight of the show is the strippers’ trio “You Gotta Have A Gimmick,” choreographed by Chrissi Ardito and staged by — credit where credit is due — Kelley. Pattison’s zaftig Tessie Tura, who is just as funny with dialogue, is hilarious flapping her butterfy wings about “with finesse” accented by a pelvic thrust. Genovese is just as hysterical with her barely-qualifies-as-a-twitch movements that show just how bored and burned out Electra has become in the bottom rung of the entertainment world. And the limber lovely Groom almost steals the number as she toots on a horn while advising “bump it with a trumpet.”

Kelly Ziegler, a recent New World School grad with a couple of credits from The Wick Theatre, is so tamped down and colorless as Louise that she rarely registers except when lending a lovely voice to “Little Lamb.” But she does, indeed, come into the part in the final two book scenes as the blossomed Gypsy Rose Lee. Erica Rose Mendez has the showier role as the grown Dainty June, which allows her to display her skills more easily.

Only a handful of local companies could afford the live orchestra needed to do this show right, but this is a score that demands it. And frankly, there are tracks and there are tracks. These sound as if created on someone’s keyboard in their garage. 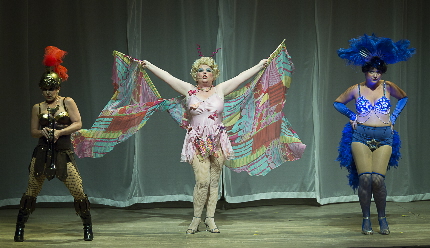