Arts Garage’s I And You Looks At Life, Death and Teenage Angst 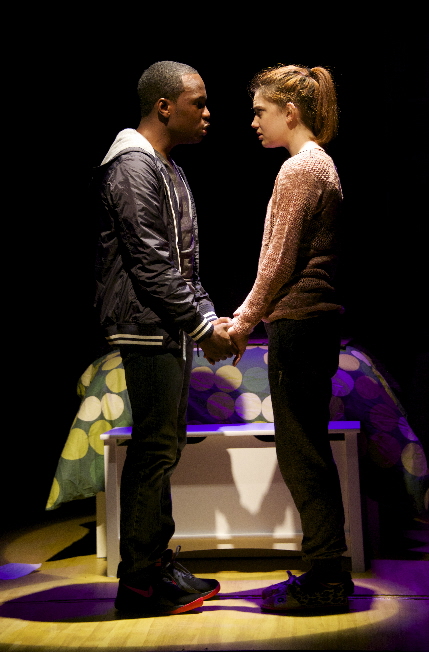 I and You has one of the least promising elevator pitches: teenagers studying the poetry of Walt Whitman discover that the eternal cycle of life and death is less inscrutable or meaningless than it seems.

Sounds like an Advanced Placement ABC After School Special.

But as The Theatre at Arts Garage’s production illustrates, Lauren Gunderson’s award-winning play succeeds as both a droll dark comedy and an insightful, even moving inquiry into mortality.

It is set in the seemingly pointless world of cold pragmatism that teenagers have been inserted without being consulted. And the most unfair facet of being born is the inevitability of death, a reality that these still evolving adolescents now face head on far earlier than their grandparents did.

The fact that these 17-year-olds –- and we with them — credibly find some measure of understanding through the wisdom of Whitman’s poetry in Leaves of Grass (with a little help from John Coltrane and Jerry Lee Lewis) is testament to Gunderson’s achievement.

The play opens with Caroline bopping to music in her bedroom, a haven festooned with penguin dolls and photographs she has shot of kittens. A classmate she has never met, Anthony, slips in and says that they have been paired on an American Lit project to finish a multi-media report analyzing some facet of Whitman’s masterpiece. She is white and he is black, something that is not underscored often but which adds an additional facet separating them.

The gulf is far larger than that, although both teens are unusually bright minds trapped inside classically discomfited adolescent personas. Caroline, in fact, has been homebound because a liver damaged since birth has left her a hair’s breadth from death her entire life as she waits for a transplant. But a born fighter, she has reluctantly agreed to keep up with her classwork, so her teacher has assigned Anthony as her project partner.

Besides the normal maladjustments that define adolescence, the imminent loss of life and any meaningful relationships has prompted Caroline to stiff-arm most human contact. She has donned a prickly, contentious demeanor toward everyone and any endeavor, albeit leavened with a knack for wickedly funny barbs. Pessimism imbues every moment of her waking consciousness.

Anthony is an equally bright, deeply earnest type who steadfastly wants to finish this project by tomorrow’s deadline. He is initially willing to put up with Caroline’s acerbic banter but then he gives as good as he gets. Anthony has plugged into Whitman’s genius for poesy and philosophy. Of course, over the space of a single day, they push and pull at each other before bonding by embracing that Whitman’s ethos has relevance to them both.

This description may not seem enticing to some theatergoers because the play’s virtues which make it worth sticking with are only outgrowths of the clothesline of a plot.

First, Gunderson has created a couple of believable troubled teens who are fun to hang with — delightfully irreverent, simultaneously childish and mature.

Gunderson’s teens act and sound so much like your own teens, you feel like you are eavesdropping. Caroline especially is technologically savvy, to the point that she uses it to keep the world at bay; she even texts her mother for snacks rather than call downstairs.

More crucially, Gunderson has written characters who win our compassion because their uncertainty about the meaning of life and the fear of death clearly mirror our own angst. We want to learn what they are learning. And indeed, Gunderson and Anthony show us that Whitman does have a point of view worth considering.

The audience is also kept intrigued by the almost subconscious perception that deeper mysteries are swirling just out of reach. Sure enough, the play takes what may seem a sharp left turn in the final minutes. Some people may feel stylistically whiplashed by this and even question it. We’ll disagree on that; it’s a thematically justifiable development that elevates the play, like seeing an image through a camera lens suddenly shift into extra sharp focus. Not only are we not going to spoil the development, but we’ll slice open your car tires if you reveal it to anyone. You’ve been warned.

Twenty-something actors Gracie Winchester and Terry Guest deftly pull off the difficult assignment portraying late adolescents. Some previous productions have stumbled by having far older adults “play” teens rather than inhabit them as these two do. But if the actors were too young they might not have accumulated the observed behaviors that signify a credible teenager.

Guest has the tougher job because Anthony is so seemingly normal that he’s like a straight man-punching dummy for Caroline in the opening scenes. But over time, he pulls back viscera to expose layers of complex personality and a turmoil just below the affability.

Winchester has the more showy opportunities and she revels in them. Her Caroline might be jumping on her bed like a tween one moment, exulting in “Great Balls of
Fire” another, angrily rejecting anything that even smells like pity one moment, surprisingly reaching out to comfort Anthony the next. She has internalized Gunderson’s modern teenage speaking rhythms without ever seeming like she is giving a performance.

In part due to budget concerns, Arts Garage has leaned toward shows with two and three actors. Fortunately, exploring relationships between a few characters is one of director Louis Tyrrell’s gifts. Once again, as he did in Lungs in 2013, he deftly shapes performances, helps actors find nuances and carefully paces the tidal rhythms of a play’s arc.

This is approximately the tenth production of Gunderson’s play which won the American Theatre Critic Association/Steinberg new playwriting award spring. (Full disclosure: I chair that contest committee and supported this play). Gunderson is an unusually talented and prolific writer who also wrote Exit, Pursued By A Bear produced at Arts Garage in its first season. In this work, she swirls together the yin-and-yang pain and beauty clothed in wry humor and deep compassion.

This entry was posted in Performances, Reviews and tagged Gracie Winchester, I and You, Lauren Gunderson, Louis Tyrrell, Theatre At Arts Garage. Bookmark the permalink.