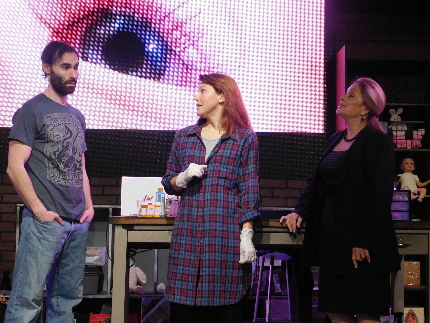 In the show’s difficult Florida premiere at Theatre at Arts Garage—the first in its intimate new black box theater space—we first encounter Kelly (Elizabeth Price) smoking a joint at her workstation, dressed in pajamas and listening to classic rock. Angie Riserbato’s set design is appealingly unsettling. A doll in mid-construction lies on a metal table, and on either side, tubs and baskets full of rubber infant appendages are stacked on industrial shelves. A handful of completed dolls stare at as soullessly, as if awaiting their horror movie franchises.

Kelly is about to encounter an unexpected guest in her Queens walkup: Emily (Deborah Kondelik), a lawyer en route to work, whose requested doll in the likeness of her late baby Eva isn’t due until the next day. Kelly scrambles to deodorize the pot haze, switches the rock soundtrack to tinkling lullabies, and welcomes her guest, who requests a visible progress report. At first, Emily seems pleased with Kelly’s craftsmanship. Working from a photograph, she captured the “little crust on [Eva’s] eyebrows,” and the hair—“Australian mohair micro-rooted to the scalp”—is spot-on. But there’s something a little off about the replica, something not quite accurate to Emily’s burned-in memories of her child. Something in the eyes, perhaps.

The visits continue, each one showered with light complements but rooted in fundamental dissatisfaction. And the more she stops by, the more Emily pries into Kelly’s personal life—which includes a history of child abuse resulting in the loss of one of her five senses, a former heroin habit, a loss of libido, an unhealthy obsession with her work, and a propensity to self-medicate with pills and booze. Eventually, the “Eva” doll becomes more than just an assignment, spiraling its creator down a disquieting abyss and plunging her already inclement relationship with Daizy into deeper chaos.
Reborning is the second show in Arts Garage’s first season under Genie Croft and Keith Garsson’s artistic direction, and it’s the second in a triptych of psychosexual dramas that began last fall with Laura Eason’s Sex With Strangers and concludes this spring with Kim Davies’ Smoke. Dohrn’s play is a considerably tougher sell than the Eason or the Davies, not just because there’s nothing sexy about it. Reborning leans heavier on ambiguity, intimation and unanswered questions, launching as a ribald sitcom and climaxing on the tenterhooks of madness, a la Tracy Letts’ Bug.

The acting is generally faultless, with Nicholas Wilder easing comfortably into the role of Daizy and carrying the comic weight of Reborning, whether it’s creating impromptu percussion from a sizable latex phallus or leavening a tense moment with a well-timed reference to Rosemary’s Baby or The Shining. Kondelik’s Emily is a sympathetic embodiment of maternal longing, portrayed with a hint of potential disingenuousness just below the surface. Price, last seen at Arts Garage in the torrential gabfest The How and the Why, has more space here to expand her character with actions instead of just words. A bit more room-destroying abandon wouldn’t hurt, but she captures Kelly’s deliberate breakdown with subtle aplomb, from manic moments of quivering inspiration to frayed descents into fetal positions.

Yet if Dohrn’s play has an overriding point, it’s hard to extract it from this production. This thought-provoking work hints at many weighty topics—the anxieties of pending motherhood, the conflicting desires to both nurture and destroy, the futility of trying to re-create what is lost—but none are fleshed out to a degree of dramaturgical satisfaction.

Along the way, something intangible is lost somewhere between Dorhn’s imperfect script and Garsson’s restrained direction, because this bruised portrait of mental and physical decline fails to affect us in the gut and heart as much it effectively stimulates the brain. With an assist from Linda Shorrock’s costumes, Garsson ends the show with an ingenious mise-en-scene pregnant with added meaning. It’s a virtuoso touch except for the nagging fact that, like its broken heroine, we just don’t feel anything.