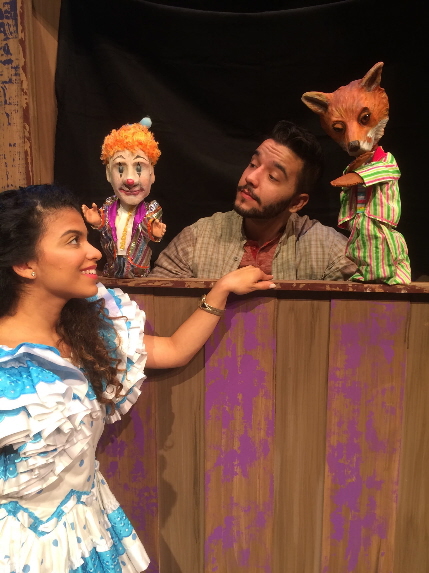 Technical actors manipulate an audience by pushing this emotional button or that one, carefully timed and bathed in this light or that. But that only gets you so far. The magic that theater can be is far more elusive, even when it’s backed up with energy and elbow grease.

The 1961 musical Carnival – rarely produced but beloved for its original cast album – is very difficult to land because it requires that magic be conjured to reconcile a tale in which a young woman’s child-like innocence credibly persists in a ragged post-war world wounded by harsh realities. To keep its signature song “Love Makes The World Go ‘Round” from being saccharine — indeed, for it to become a clear-eyed prescription for the world’s ills — that takes an exceptional talent at theatrical prestidigitation.

Broward Stage Door’s edition under Dan Kelley’s experienced hand features a hard-working cast, some of whom have fine voices doing adequate justice to the gorgeous score and lyrics, but that alchemical enchantment just isn’t there.

The music numbers swelling with emotion or sparkling with wry wit come off reasonably well sometimes, thank goodness, but the book scenes play a couple of cuts better than what you’d see in an amateur production.

You can hear the greater potential in the score by Bob Merrill (Funny Girl) and book by Michael Stewart (Hello Dolly), based on the Leslie Caron film Lili and the much darker short story and later novella by Paul Gallico, all of it shaped by director Gower Champion and producer David Merrick.

The story is set in 1948 in a provincial French town where a threadbare down-on-its-luck travelling circus is visiting. Lili, a lovely recently-orphaned woman in her teens (Anjane Firestone), seeks employment from a friend of her late father. She is unworldly with a naiveté that borders on a child’s. Lili attracts the roving eye of the troupe’s magician Marco the Magnificent (Michael Santora), a lothario with lust beneath his purportedly altruistic agreement to hire her. This enrages his long-abused mistress and on-stage assistant, Rosalie (Alexa Baray).

Intervening is the kindly Jacquot (Sebastian Lombardo) who drafts Lili as a live foil to the four puppets that he operates with the moody Paul Berthalet (Bruno Faria). Paul is a world-famous dancer wounded in the war who is toxically sour that his life is limited to manipulating puppets. But Lili, who thinks the puppets are real, creates a loving relationship with them that is evident when she sings and banters with them in the increasingly popular show. Lili’s open-heartedness angers and unnerves the embittered Paul who is falling in love with her against his will. Will they find true love?

Firestone, a collegiate voice teacher, has a delightful full soprano and she consistently exudes Lili’s breathless ingenuousness, artlessness and the joy of a pre-teen visiting Disney World for the first time. But she plays every musical number straight out to the audience so we have trouble buying her as a real character. In fact, this is true of most of the cast who rarely sing to each other.

Faria, who has been nailing roles recently in Aida, Rent and Bonnie & Clyde, has a terrific voice for the deeply troubled character and his ballads are the best part of the show. But he is a tad young for the part and he has difficulty digging deep enough into both songs and book scenes to plausibly communicate the profound depth of Paul’s disaffection for life.

The rest of 18-member cast (including Lexie the dancing dog) are passable, although some have trouble hitting some of the notes in their songs and none of them delivers an especially convincing acting job.

Another problem is that the show stops frequently for interludes of carnival acts including a juggler, tumbler, dancing girls and the like, plus Broadway musical dance breaks choreographed by Ben Solmor. While all this is doubtless in the script, it slows the narrative drive the third or fourth time they appear. And while this is supposed to be a fourth-rate carnival, the acts are pretty darn tame.

It’s too late to do anything about it now, but the puppets are too small to be visible more than halfway back in the auditorium. If you look at photos of the Broadway production (or for Avenue Q), the puppets’ heads were nearly as large as that of the human co-stars.

Carnival is tough show to pull off and Stage Door has overcome some of the challenges, but it really needs some of that theatrical sorcery.