Arts Garage’s Scorching Smoke Suffused With Sex As A Weapon 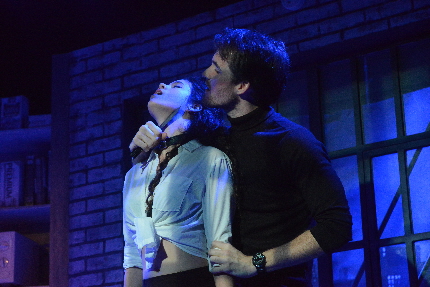 Unless you spend hours in the darker corners of the Internet, you have never seen soul scorching theater precisely like Arts Garage’s Smoke, an excoriating tale of sex as a razor-sharp weapon in a war for dominance that has nothing to with pleasure, let alone love.

There may be no physical nudity, nothing for those seeking a purely prurient evening. But the most violent rape in the sado-masochistic games on display is stripping someone’s ego bare and spotlighting their most profound flaws. That’s not some neat turn of phrase; that’s the core of the play.

Clearly, this is not to everyone’s taste – and not referring to the in-your-face rough foreplay that gets unnervingly graphic, but the pitiless depiction of soulless creatures eviscerating each other emotionally.

Arts Garage’s Producing Director Keith Garsson stumbled over this piece by playwright Kim Davies during its acclaimed premiere in 2014 at The Flea Theatre in Tribeca.  It’s easy to see why it stuck with him.

The play opens genially enough. John (Clay Cartland) is a handsome personable 31-year-old intern to a famous photographer, having an illicit cigarette in the empty kitchen of a Harlem loft where a regular casual sex party is underway in the living room. Wandering in is Julie (Connie Fernandez), a fresh-faced 20-year-old rootless soon-to-be college dropout, also seeking a forbidden smoke. As they banter and flirt a bit, John discovers that Julie by coincidence is the daughter of his boss.

John is a classic small town guy trying to make it in the big city for a decade and who has incorporated all the hippest urbane attitudes including those about sex. An experienced participant, he’s a paternalistic instructor towards Julie’s interest in sex parties. He says, “You know you get to choose. It’s not open season…. There are rules.”  Still, he warns some people will try to take advantage of her and hurt her for real. But that prospect strikes a chord with her. She says, “I want to see if you can break me down.”

She seems a spoiled rich kid who gets off on flirting with danger. “I think I manage to do as little as possible in my life. I want to fail. I want give up,” she says. He counters that you have to want to do something. Both are adrift.

A frisson ignites as they probe tentatively about each’s proclivities, especially about kinky or rough sex. The language throughout is peppered with obscenities.

No one is quite what they seem. The plot and the sexual stakes spiral deeper with twists we won’t spoil. Any attempt at physical sadism is not as destructive as the infliction of devastating psychic pain. Still, Arts Garage hired a “movement safety specialist” to ensure no one got hurt during the roughhousing – so realistic that it forces the audience to privately assess their own reactions to what they are seeing: it is titillating, does it repel, or both?

The actors, Garsson and Davies create with absolutely credibility an alien world of ultra-sophisticated New York millennials for whom sex of any stripe is bandied about with a studied indifference. Their blithe attitude disguises a desire to experiment with sexual experiences and that toying with danger (under controlled conditions, of course) is a form of Ecstasy to stave off a deadness in their lives. Sex is flattened to the point that appetites are reduced to slick lingo, such as “het dom” for heterosexual dominant. One by-product is that devaluing sex, let alone true emotions, is the conscious devaluing of themselves as human beings or anyone else.

Davies creates a dance that starts like any random encounter at a party, but which corkscrews inward. Her facile dialogue is totally believable as this relationships spins into deeper and deeper territory. But she owes a great deal to Garsson who paces this tarantella with precise calibrated rhythms – shallow whip-smart banter one moment and pregnant threatening silences the next. Looking at the script, it’s clear that Garsson and his team have added scores of tiny little grace notes, tweaks and enhancements down to the final seconds of the play.

Garsson’s other achievement are the performances he gets from his cast. Carbonell-winner Cartland is best known for having some of the best goofball comic chops in the region, usually in musical roles that have a serious underpinning (he starred as the man turning into a slug in Arts Garage’s The Trouble With Doug.) But here he uses his innate likability to provide a disarming exterior for a scruffy loser with a stylish five-day growth of beard, yet who we easily believe has secret perhaps brutal facets buried inside.

Fernandez, a 2014 New World School of the Arts grad, has mostly appeared in college productions. But her leggy, sexy Julie is a documentary-quality depiction of a subset of the imminent inheritors of our world. It is a subset that exudes both a premature knowledge of the world’s potential callousness, but a defiant aura of someone whose refuses to countenance her ignorance that playing with fire can lead to… well, you know.
.
The sets and lighting by Rick Boggs and Bombshell Productions, the costumes by Linda Shorrock, down to Jamie Cooper’s props like a package of cigarettes is a completely black and white environment like a photograph. Tom Shorrock’s lighting subtly changes throughout to emphasize the mood swings.

It all underscores that in the world of Smoke, the players discover it’s too easy to go too far– and there is no safe word.