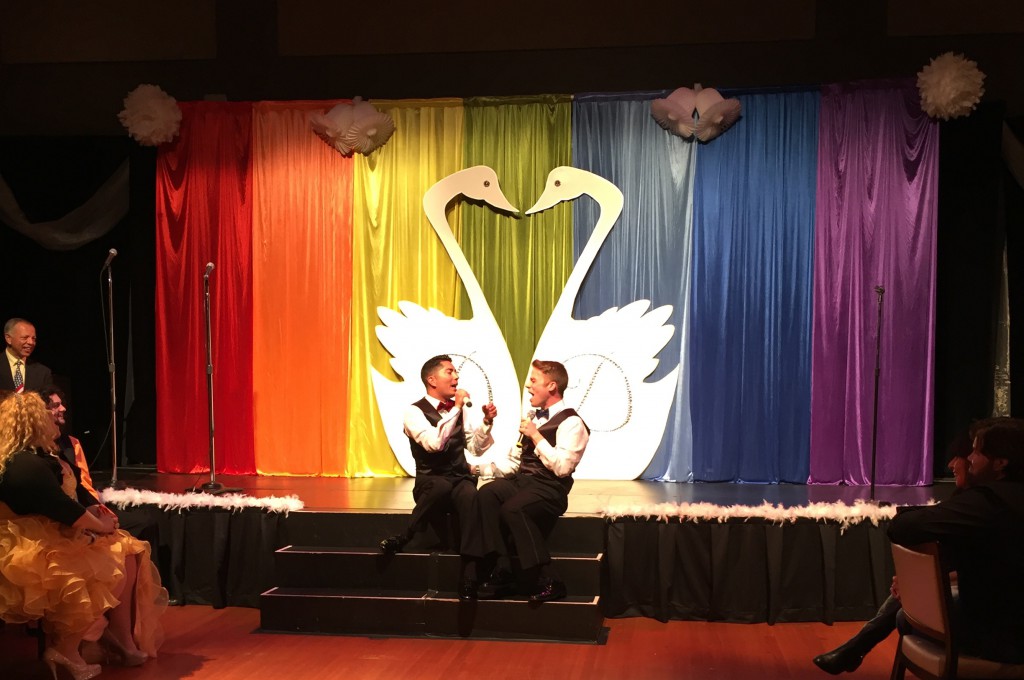 Benny Antipuna and Eric O’Keefe croon to each other at the wedding nuptials in “Diego & Drew, Say I Do / Photo by Meagan Nagy

Diego & Drew Say I Do, the new interactive theater wedding show in Broward Center’s Abdo New River Room, is so authentic that a group of Chinese performers from the Cirque Dreams troupe in the audience were under the impression they had been invited to a real wedding.

The original production, locally developed by Jennifer Sierra-Grobbelaar and Matt May finds a comfortable home in the dinner theater setting. If you’ve ever been a guest at the granddaddy of the interactive wedding shows, Tony N’ Tina’s Wedding, which originated off-Broadway and continues to play throughout the country, Diego & Drew Say I Do doesn’t fall too far from that tree. But the musical takes some original twists and turns and, thankfully, leaves out a lot of the pandemonium that made TNT over the top.

That’s not to say doesn’t have its over the top moments, including Diego’s outlandish cousin Tia Maria (Vanessa Elise), who sings a dedication to the couple she wrote filled with TMI (that’s too much information) details about Diego’s potty habits as a child, a surprise twist a la Magic Mike, and a drag queen who received her officiant license on the website divas.com. That’s only a sample.

While TNT premiered in 1985 to satirize the marriage between a man and a woman, Diego and Drew is a wedding show for the 21st century. The co-creators have obviously and intentionally made this a story about a couple, gay or straight, with more emphasis on the dysfunction that arrives when two families from different worlds collide.

Credit goes to director John Manzelli and the producers-writers May and Sierra-Grobbelaar, plus the cast. While they make this undertaking look like it’s a walk in the park, there are plenty of spinning plates that surely go on behind the scenes to pull off a show with so many moving parts. Not only does the cast and crew have to produce what boils down to basically the presentation of an original play, but they have to also make sure 200-plus audience members get fed dinner and wedding cake, participate in interactive moments (selected audience members are tapped for a candle ceremony) and that everything works like clockwork in a confined amount of time: The show starts at 8 p.m., buffet at 9 p.m., everyone served by 9:30 p.m., show continues, mayhem ensures and so on. By 10:05 p.m. things are wrapping up.

The full dinner, which is part of the ticket price, mixes Southern hospitality with Puerto Rican cocina criolla. (The mega chicken legs served were over-the-top and as big as Big Daddy, Drew’s southern fried grandpa.)

The perfect casting of the show with top-notch actors serve the stereotypes, making them more comical than caricature. Mike Westrich plays supposed former boy band member Vance Treble. He’s a riff on former has-beens like the Backstreet Boys. Treble used to perform with the LoverBoys but is known for his solo hit, Party in My Pants, written by the show’s actual musical composer Maciej Osada-Sobczynski with lyrics by May and Sierra-Grobbelaar.  Westrich as Treble entertains live during dinner – a wise choice by the creators instead of recorded music. This serves to keep the continuum of the show going while dinner is served. The actors socializing at tables during the dinner break also keeps up the momentum.

Merry Jo Cortada as Virginia Hollingsworth, who arrives at the wedding with her much younger boyfriend Bo (Cannon Starnes), and Madelin Marchant as Lourdes Torres, have created memorable mothers of the grooms. Starnes, who could easily be a stand in for Matthew McConaughey with his six-pack abs and Magic Mike moves, entertains in one of the most hilarious twists of the night.

Benny Antipuna and Eric O’Keefe as Diego and Drew sing one fabulous duet (you’ll have to go see the show to enjoy it as it would be a spoiler to reveal it here)
Kent Wilson is drag queen Raven Evermore, Cesar Arguelles is Santiago Torres, Dominic Smith is Diego’s younger brother, Max (who knows who Patti Lupone is thanks to Diego), Steven Chambers plays Drew’s dad Andrew Boudreaux who harbors a secret, and Danielle Tabino is full of Southern charm as school teacher and Drew’s high school sweetheart Shelby Roberts, “now the Will to her Grace.” And, of course, Colonel Sanders look alike Big Daddy (Mark Kroczynski).

Two of the characters who seem the least realized are wedding planner Chauncy Davenport (Jeffrey Bruce), who likens his life to a Broadway song cue, and social media director Stacy Nicole Masters (Meagan Nagy). While they open the show and serve as the wranglers to keep everyone moving along, the characters lack a sense of purpose other than, in Chauncy’s case to throw a zinger or two out into the crowd once in a while. Stacy’s consistent throughline is more public relations for the actual show than character – her presence is to make sure the audience gets the word out about the show on social media (lots of hashtag slinging).

The Fort Lauderdale Gay Men’s Chorus is represented by two members, The Twinkle Toes, who sing “Somewhere Over the Rainbow. The collection during the grooms’ dollar dance during each performance is a nice touch to benefit AIDS Healthcare Foundation (AHF) and The Pride Center organizations.

A real-life twist on opening night was journalist J.W. Arnold’s proposal to partner Clint Gordon. A wedding and an engagement in one night.

While there are a few rough edges that are par for the course in any brand new original show, Diego & Drew Say I Do is a fun night out. Good food, wacky families, and the chance to do the Cha Cha Slide.

Diego & Drew Say I Do runs for two weeks, Thursday, March 31–Sunday, April 10 with show times on Thursday and Friday at 8 p.m.; Saturday at 4 p.m.  and 8 p.m.; and Sunday at 1 p.m.  and 6 p.m. Tickets are $59.50 general admission and includes buffet dinner, cake and champagne toast. $105 VIP tickets are available on select performances including reserved seating, cast meet & greet and signed show poster. A full cash bar is open throughout the show. Running time is 2 hours and five minutes. Tickets at www.browardcenter.org or ticketmaster.com, by phone at (954) 462-0222, or at the Broward Center box office.

To read an advance feature on the show, click here.

This entry was posted in Performances, Reviews and tagged Broward Center for the Performing Arts, Eric O'Keefe, Jennifer Sierra-Grobbelaar. Bookmark the permalink.