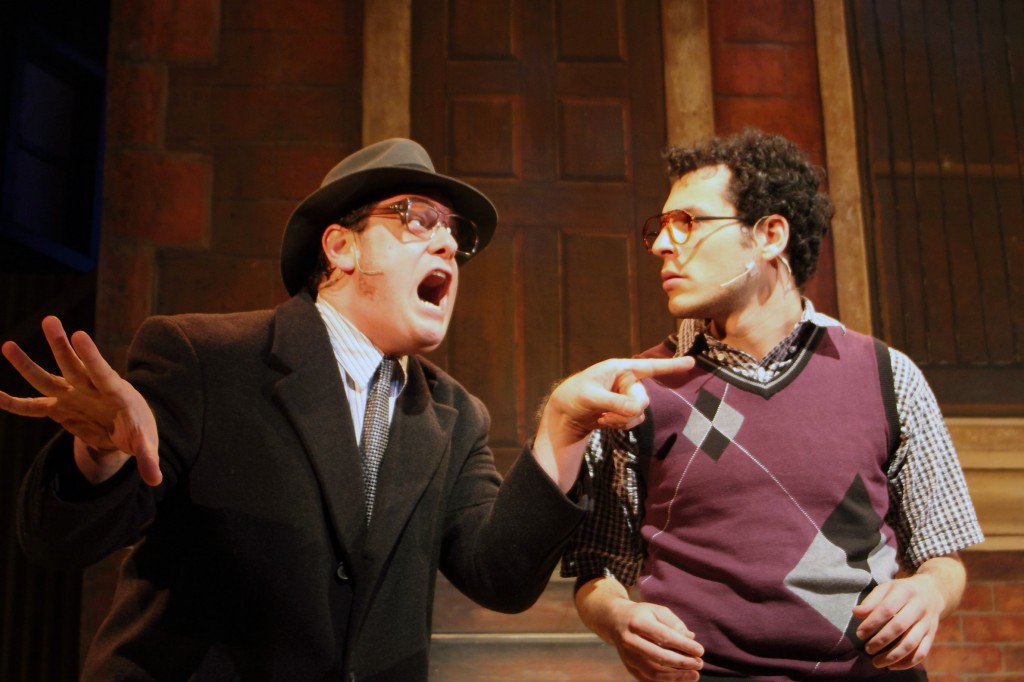 Sometimes, when the material is strong enough, success means just getting out of its way. For the most part, that’s what a cast of strong singers and the director do to make Broward Stage Door’s Little Shop of Horrors a smile-inducing entertainment.

It’s not that anyone’s coasting here. But unlike, say A Funny Thing Happened on the Way to the Forum which is all about imaginative staging and injecting shtick, Little Shop’s ability to please lies primarily in its witty score and lyrics.

Director Dan Kelley, who certainly knows from shtick, has wisely not gilded this lily, which is a quiet satire at its heart. Stage Door is famous for the variable quality of its shows from the sublime (Light in the Piazza) to the wretched (Singin’ in the Rain). This entry skews solidly toward the beguiling category, much like its satisfying The Drowsy Chaperone, also directed by Kelley.

Little Shop began life in 1960 as schlockmeister Roger Corman’s low-budget but wry lampoon of low-budget horror movies. A throwaway hoot filmed in two days, it became a cult favorite. It told about a nerdy assistant in a flower shop who finds a strange plant and discovers that it will grow if it’s fed blood.

Then in 1982, composer Alan Menken (later to write several Broadway and Disney blockbusters) and lyricist-bookwriter-director Howard Ashman (a minor genius who died just after finishing Beauty and the Beast) saw the possibility of taking the show another step. They added a score of uncannily accurate riffs on infectious street corner doo-wop and early Motown music, melded with clever lyrics and a sharp script that parodied B-movies, science fiction flicks and that cultural hammock between Camelot and Hair.

The nebbish Seymour (played here by Michael Kinden) labors unappreciated in the skid row florist shop of the pragmatic owner Mr. Mushnik (Bob Levitt) and pines for the affections of their lovely clerk Audrey (Erica Lustig) who has no self-esteem but does have an abusive boyfriend (Matthew William Chizever). Seymour realizes that the tiny plant Audrey II discovered during a total eclipse of the sun will grow, speak aloud like a ghetto king and grant wishes if it’s fed blood (fresh blood only, but body parts can certainly be attached). Commenting on the ensuing comic tragedy like a Greek chorus are street urchins Ronette, Chiffon and Crystal with the talent of a Motown girl group (Kassiopia DeVora, Amber Hurst-Martin and Jasmin Richardson).

Ashman wrote wonderfully deadpan lyrics like Audrey’s: “I know Seymour’s the greatest, but I’m dating a semi-sadist,” or dialogue like “If I had a mother, she’d be so happy” and delightfully silly offhand rejoinders like Mushnick asking Audrey if she’s late to work because she got tied up. She answers, “No, just handcuffed a little.”

We caught one of the last previews for scheduling reasons, so the production had another few days to fine-tune the show. But the only real fault that was that most of the evening could have used a little more zip. This was clear any time Chizever came on stage; you could feel the whole enterprise kick up a notch from the electricity he brought to a wide array of parts.

But that may be because Little Shop is a chamber piece meant for an intimate off-Broadway house. Things get a little lost on a large, wide stage like Stage Door’s main auditorium. A cast has to push harder in the larger space.

The best news is that the pre-recorded music tracks – enabling the score to have a full sound on a budget – are once again the skilled work of former Floridian David Cohen. If you must go with canned music as Stage Door opts to in order to give its audience the sense of a full band, Cohen delivers multi-layered pristine soundtracks with room for the singers to caress the lyrics. Two recent Stage Door productions, My Fair Lady and Guys & Dolls were crippled by the sub-standard recordings provided by some mass production house.

Kelley has cast the show well, especially in the vocal department. Linden has to work to seem appropriately woebegone with a stooped posture and nasally timbre, but he lands the songs and lyrics as well as anyone could hope for.

Lustig is unimpeachable as the leggy, busty heroine with equally bad taste in boyfriends and clothing. She nails the weird meld of baby doll and clarion soprano voice that Ellen Greene patented for the role when she created it in the original production.  Her rendition of the yearning “Somewhere That’s Green” elicits a chuckle at her conventional 1960’s daydream of a tract home paradise, but also compassion for someone whose only dream is so ridiculously modest. But when she and Linden belt out “Suddenly Seymour,” her voice likely can be heard echoing through the walls of Stage Door’s adjacent smaller auditorium.

Audrey II’s deep Motown baritone voice with its expressive melisma comes from Marcus Davis, usually a dancer in Stage Door productions. The massive puppets created by Jeff and Christy Brigman (the Internet says they built them for a previous production by Coral Glades High School) are droll if clearly made in someone’s garage. Curtis Roth does a fine job operating the puppet.

Even Bob Levitt, not the strongest member of Stage Door’s unofficial repertory company, gives an adequate performance as Mushnik, keeping up with the music and Ashman’s twisting lyrics, although his voice sounded a bit strained.

The strongest element of the entire show after the Menken-Ashman contributions is Chizever. He doesn’t have the lead role, but he runs away with every scene he’s  in because he invests each of his daffy characters with vibrancy and vigor whether it’s a skid row bum, a talent agent, a well-heeled customer or the wife of the Life magazine founder. But obviously, he’s in hog heaven chewing up the showcase role part of the sadistic dentist who dresses in a Marlon Brando “The Wild One” motorcycle jacket and punctuates his songs with Elvis the pelvis twitches when he’s not abusing the heroine.