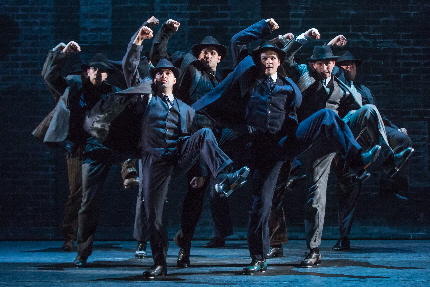 Back in the day, when Broadway was a leading contributor to the nation’s pop culture, there was a kind of show that wasn’t a transcendent blockbuster and wasn’t trying to be. It just wanted to entertain the tired businessman and his family. Ticket prices and production costs weren’t obscenities, so the risk for both patron and producer wasn’t daunting and the resulting quality was “adequate.” They lasted about a season and their names were forgotten except by completist collectors of original cast albums.

Bullets Over Broadway, a 2014 musical based on the 1994 Woody Allen film, would have fit nicely in that undemanding appetite for light entertainment. A lot of talent and skill went into the enterprise, resulting in a mildly diverting evening now represented in a national tour visiting the Kravis Center for a very short run.

But it’s what some theater fans call a “Why Musical,” as in why bother musicalizing the original near-perfect property when the demands on time and money for both patrons and producers is so great.  Clearly, the creative team was hoping for a hilarious hoot like The Producers or gentle ribbing of nostalgia like 42nd Street, or both as with On The 20th Century.

The problem is that none of those exemplars are quite in the same groove as Allen’s droll vibe and they don’t meld well with his unique style. So you can enjoy the diverting singing and dancing musical comedy grafted none too smoothly with an equally funny script that belongs in another medium. The film was a kind of satirical farce; this musical is more of a cartoon.

The musical is based on Allen’s wry comedy about the neurotic world of a Broadway play coming together in the late 1920s, colliding with comical organized crime figures with little talent for other than murdering people.  The film was especially memorable for Diane Wiest’s over-the-top alcoholic leading lady, which won her the best supporting actress Oscar.

Allen, whose stage work includes Play It Again, Sam, resisted the idea of a musical for a while, but gave in to the urgings of his sister. He wrote the book for the musical and his razor-honed witticisms are the strongest aspect of the show. The rest of the creative team incorporated music from the Great American Songbook of the 1920s and 30s such as “Tain’t Nobody’s Bus’ness,” “Running Wild,” “I’m Sitting on Top of the World” and “Let’s Misbehave.” The score was adapted and extra lyrics added by Glen Kelly who did the heavy lifting musically for The Producers because Mel Brooks cannot read or notate music.

But the hopes for the piece relied heavily on the talents of director-choreographer Susan Stroman, acclaimed for her work on The Producers and Crazy For You. The show opened on Broadway to mixed reviews despite a dream cast and closed after a reasonable but unimpressive 156 performances. The show earned six Tony nominations including for Stroman’s work, but the only win was for William Ivey Long’s costume design of pinstripes, fedoras and period gowns.

The plot riffs on the backstage musicals of the period (again, think 42nd Street). In 1929, young playwright David Shayne (Michael Williams) with two off- Broadway flops is finally getting a Broadway production of his deadly drama God of Our Fathers. Brooking no compromise in his art, he insists on being the director.

The producer, Julian Marx (the producer in 42nd Street was Julian Marsh) has asked the mobster Nick Valenti (Michael Corvino) to bankroll the production. The catch is that Valenti insists that Marx (Rick Grossman) hire his none-too-bright and talentless chorine girlfriend, Olive Neal (Jemma Jane) for the part of the psychiatrist in the show.

To ensure his lusty moll is unmolested, Valenti has attached his hulking goon of a hitman Cheech (Jeffrey Brooks) to be her watchdog. Woody Allen’s most delightful conceit is that Cheech has a blithe untutored sixth sense for dramaturgy. He off-handedly suggests tweaks and then massive changes that significantly improve the work-in-progress. As rehearsals progress, Cheech is lured into this insane world and Shayne’s script disappears in Cheech’s rewrites.

Romances and pursuits complicate everything. The drunken aging diva Helen Sinclair (Emma Stratton), the actual headliner, puts the moves on the young playwright who has to mollify his true love, Ellen (Hannah Rose Deflumeri). At the same time, the show’s increasingly corpulent male lead Warner Purcell (Bradley Allan Zarr) is pursuing Olive which, of course, is not healthy for his future or the show’s.

It does sound like a natural to be musicalized. But somewhere around the third performance of the out of-town tryout, Cheech could have told them that it wasn’t going to hang together well in practice. Anyone familiar with the film will feel like the musical numbers and even the dances were pasted on.

But when you have a talent like Stroman, you can – and they did – fall back on the bouncy razzamatazz score, boundless energy from a silver-throated cast and, especially Stroman’s superb choreography. Lots of numbers feature chorines strutting their stuff and, like Stroman’s Producers number where elderly women dance with walkers, Stroman has hoods twirling and tap dancing away with the percussive sounds echoing machine gun fire, all led by the unthinkingly murderous Cheech. No one can argue that Stroman knows how to entertain an audience.

But see, that’s indicative of the problem. In the film, Cheech was played by the then-emerging Chazz Palminteri, whose sullen expression and Bronx brogue made him a convincing brutal killer even when he was revealed to have an artist’s ego. Having him sing and dance here by a handsome young actor who patrons might want take home undercuts the conflict that makes the character funny.

In the film, Wiest’s actress was way past her prime and old enough to be Shayne’s mother. She was drowning in her own ego to the point of being not just funny or aggravating, but almost pitiable. The diva in this show may be the ripe old age of 37, her drinking is just period stylish and her ego is no worse than any other leading lady’s.

This tour – with Stroman’s work “recreated” by director Jeff Whiting and choreographer Clare Cook – has its own virtues. The non-Equity cast invests everything it has in the material, executing it with energy and style. No one is coasting, especially Stratton as the diva and Jane as the mistress with a nails-scratching-on the-blackboard voice and a Woody Woodpecker laugh.

And there still are Woody Allen’s perfectly crafted lines like when the commitment-averse Shayne tells his girlfriend, “Marriage is a serious decision – like suicide.” Or when the diva says she doesn’t like colorless roles, “When I played the Virgin Mary, I didn’t play her as a virgin.”

And Kelly has collected numerous little-known songs, including the none-too-subtle nightclub ditty, “I Want a Hot Dog for My Roll.” And we won’t spoil it, but the slightly dark ending is redeemed by a sublimely silly finale with a song choice you won’t expect because it’s such an intentional non sequitur.

The lively band is small, but the computer-assisted sound still has live musicians providing the inimitable wah-wahs of a trumpet and the sliding blare of trombones.

The cast, especially Jemma Jane as Olive, snaps out Allen’s lines which often don’t make sense in retrospect but which are darn funny at the time. When Nick tells Olive he’ll have her name in lights, she retorts, “Sure you’ll have my name in lights — if I change it to Exit.” Or when she says, “I want to play Lady Macbeth again like I did in Union City – and this time not in pasties.”

As usual, the run is only a week long at the Kravis; it moves to Key West next week.