Buyer & Cellar: The Price Of Celebrity And Celebrity Worship 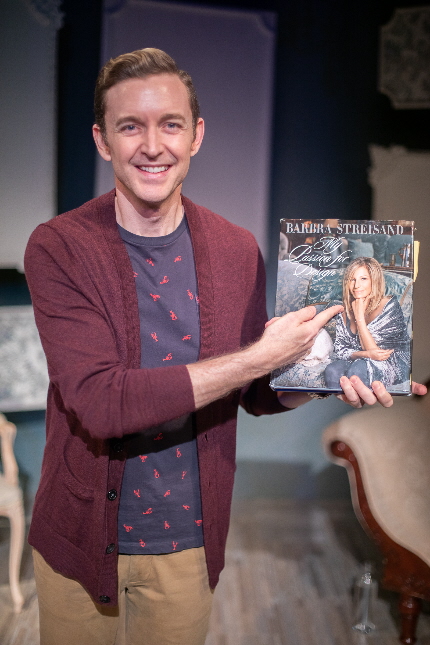 Jonathan Tolins’ 2013 satirical comedy Buyer & Cellar provides a steady supply of giggles and guffaws in this fictional tale about an unemployed actor hired by Barbra Streisand to be the sole staffer in a collection of faux Main Street shops that she built in the basement of her estate’s Connecticut-like barn — in Malibu.

The very idea that a celebrity would create such a weird Disney-like facility that only she will patronize is beyond bizarre (yet reportedly true). But Island City Stage’s production, while certainly funny, lets us view Tolins’ more serious glimpses of just how different life is for celebrities who willingly or unwillingly cut off the real world.

When the unemployed actor Alex, recreates conversations he has had with the diva, actor Matthew Buffalo and director Andy Rogow are painting a portrait of a once-mortal being now living in a fantasy.

On one hand, Alex intrigues la Streisand by inventing an intricate and silly backstory for an antique doll she wants to buy: how “Fifi” was made by a French toymaker de la Florsheim during the Resistance. They end up haggling over the price. It’s charming and cute how, when he won’t come down on his $850 asking price, she returns the next day with a $350 coupon to chop the bill down to the $500 she originally offered. But keep in mind she already owns the doll and she will get the money back from him later. This “let’s pretend” is the kind of imagining a lonely little girl would indulge in sitting on her bed – except Streisand has the money to build the store and hire the clerk. So instead of going out and having this experience for real, she has constructed it on her isolated compound.

The play, which ran years in New York and Los Angeles with Michael Urie (now in Torch Song Trilogy), stresses that this is fiction. We meet the discouraged Alex More, struggling in his profession after having been just fired as the mayor of Toontown in Disneyland. He is hired to tend her underground mall, which includes a clothing store stocked with all of her old costumes, a sweet shop, a doll shop, a gift shop – all of it really a place to store some of the tons of “stuff” she has collected like a latter day Charles Foster Kane.

Days after his hiring, his sole customer, who initially calls herself “Sadie,” appears. Over time, they develop what appears to Alex to be a deepening friendship as she reveals a lifelong loneliness and lack of self-esteem. When he relates this to his boyfriend, Barry unleashes harsh rants that puncture this burgeoning dream relationship. When Alex suggests that Barbra consider a film of Gypsy, she hires him to coach her. But Barry lambastes the egocentric absurdity of a 70-year-old woman portraying the mother of a five-year-old June and Louise.

Indeed, the laughs rarely pause as Alex giddily becomes seduced. But underneath Tolins is asking insightful questions about what fame does to distance celebrities from real life, whether they need us as much as we need them, whether we need them to preserve the impossible possibility of living in a fantasy world, and a half-dozen other queries about who we put on pedestals and what happens to those we put there. At one point, she muses to him that while she professionally and financially has everything anyone could hope for, it makes the rest of her off-stage life seem flat and disappointing.  She said she cherished her relationship with Jon Peters because “he knew what to do on Sundays.”

Tolins’ script brims with droll lines somehow made all the funnier because they are meant to be delivered with a gay flair that is beyond Tim Gunn but not quite Ru Paul. When Alex finally gets to see Barbra’s main house he deems it “Monticello if Thomas Jefferson had real money” and refers to its elegant but wretched excess by noting “I felt like a fly being swatted by back issues of Architectural Digest.”

Indeed, his participation in this extended game is simply making her distancing from the real world even easier. Alex may not see it, but we do: she is prickly and keeps everyone at arm’s length while making people think they have entered her inner circle. This evolving situation draws him deeper and deeper into this world of unreality and away from the real world with Barry.  It cannot last.

But during the two-act two-hour evening, a bubbling fizzy Buffalo and Rogow create a storytelling raconteur whose sheer ecstasy at being in proximity of the diva is infectious.  Buffalo, who teaches at the New World School of the Arts, is a thoroughly likable and charming guide. While the script persists just a little too long, Buffalo and Rogow make the journey an intriguing and entertain ride.