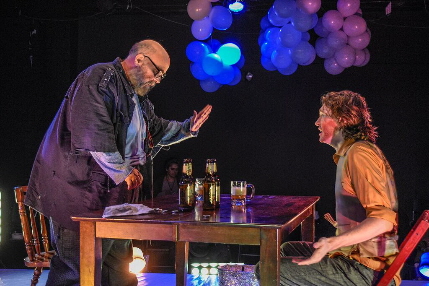 If you want to view a far more likely dystopian scenario than Mad Max, if you want to feel a quiet chill disquiet your equilibrium over one possible future in our Trumpian universe, buy a ticket to Mad Cat Theatre Company’s recreation of life under a repressive totalitarian government, a double bill of Vaclav Havel’s Protest and Audience.

Political theater, especially melded with social issues, has always been a genre on the American stage, from Waiting For Lefty to The Normal Heart. But it has been even more ubiquitous in Europe from The Resistible Rise of Arturo Ui to An Enemy of the People.

Few practitioners were as high-profile as political dissident Havel whose plays in the 1960s and 1970s fueled the movement to throw the Communists out of Czechoslovakia. While his work has been mounted in a few metropolitan areas and colleges, his indictments are rarely seen elsewhere in this country. So praise is due Mad Cat Theatre Company for its deft and unsettling production of two Havel one-acts linked by one shared character.

Given events of the past two months, the triumph of the Mad Cat productions is how the themes, characters and repressive environment are painfully more recognizable than they might have been perceived a year ago. Europe has had many dictatorships and oligarchies so that Havel’s works were satirical comment; in more traditionally democratic societies like ours, they are more like surreal nightmares.

Protest, directed by artistic director and co-founder Paul Tei, begins as a reunion of two writers who have not spoken in years: Vanek is an even-tempered playwright who had been jailed and impoverished for being a high-profile dissident. Stanek, an older writer, once gave lip service opposition but he has been co-opted into writing for state-owned television and has benefited financially.

While they circle each other with small talk, each has something they want from each other regarding an effort to free from prison a dissident folksinger, goals that coincidentally seem to overlap initially. Even more deeply, Stanek wants forgiveness and absolution.

But Vanek’s request for Stanek’s support as a matter of conscience threatens Stanek’s comfortable status quo. The craven Stanek launches into an extended aural pro-and-con argument. His tortured corkscrew doublespeak rationalizations straight out of Kellyanne Conway are stunning because, for all his avowed support of liberty and other verities, he has willingly sold out. His status as a Sunshine Patriot should make many liberals in the audience feel very uncomfortable.

Havel via Vanek believes there is something finer in people in general. Vanek is an unspectacular Everyman capable of heroically standing up for what’s right. But Stanek also shows that the idea of Solidarity is fragile among many other people. The fractures exposed by calls to action lead one character to ask: “Do you think our nation can recover from all this? “ It is not a rhetorical question for Americans in 2017.

Tei’s skills as a fine actor has helped him mold the performances of Erik Fabregat as the steady Vanek and a tour de force aria by Michael Gioia as Stanek. He knows when to have the two sit still yet keep them animated enough to beguile the audience, when to have Stanek pace nervously, and especially when to allow the characters to stay silent as they weigh what each is saying — or is not saying.

Gioia isn’t seen frequently, but this bravura performance is fully credible while bordering on the risible as the voluble Stanek turns himself inside out over and over to justify his cowardice. He exudes that self-congratulatory mien that barely hides that he knows what he would never admit aloud: that he has betrayed everyone and everything he believed in to ensure economic security and to avoid harsh repercussions like Vanek has suffered.

Fabregat, who also isn’t seen enough on local stages, succeeds in the tough part as the terse, equable stand-in for Havel himself. Much of the time, Vanek must simply listen intently without betraying what he thinks, yet still keep the audience’s attention. Fabregat does that perfectly. His intelligent Vanek has been through all the consequences and deprivations resulting from an activism borne out of conscience, yet his convictions stand unshaken. His decency remains unblemished, even a belief in the goodness of at least some people in society. Fabregat’s Vanek is someone we can identify with, even though some might see him as heroic. Fabregat and Tei make Vanek seem non-judgmental of Stanek, only quietly and doggedly intent on his goals.

Audience, directed by Mad Cat mainstay Theo Reyna, depicts the paranoia and pressures living under occupation. Vanek (played this time by Noah Levine) is now assigned by the government to a work release program at a brewery. The well-educated writer is called into the office of a department head, a blunt blue-collar Brewmaster (played by the burly bearded bull Peter Joseph Smith). Vanek is somewhat more cowed than in the earlier play and wary that he is always under microscopic surveillance for incriminating behavior. The Brewmaster initially seems to just want to get acquainted over copious steins of beer, but he has an agenda as well. He will help Vanek get a cushier administrative job if Vanek will manufacture mildly disloyal statements that the Brewmaster can report in order to secure his own position.

Reyna stages the play with a more surreal vibe. Numerous choices by Reyna and Havel include having both actors appear in clown makeup, having the increasingly drunken Brewmaster forget what he has already asked, having the supervisor repeatedly taking offstage to relieve himself and having him ask Vanek the playwright to hook him up with a lovely famous actress. In an especially intriguing choice to reinforce that this is artificial theater, the actors sometime stop and pretend to have forgotten their lines, asking the stage manager to prompt them.

The second script itself is not quite as effective or subtle, but it has some strengths: The Brewmaster starts off a boorish clown but becomes a figure of sympathy as we realize he is as caught in this paradigm as Vanek. In one brilliant passage, the Brewmaster tells Vanek that the playwright is actually luckier of the two — the government cares what happens to him and what he says; no one cares about the Brewmaster.”I’m only good enough to be the manure your principles grow out of,” he says.

Levine portrays Vanek’s subdued manner. His wariness and unease indicate his knowledge that if he says wrong thing, blood will spill. It shows Levine’s range since he is better known for outsized characterizations such as Philip Treacy in Mad Cat’s Blow Me.

Yet, as in the first play, Audience belongs to the other scene partner. Smith so completely inhabits a working class prole trying to figure out how to connect with this alien creature before him. Smith lumbers around the set retrieving fresh beer cans and chugging in between his clumsy but insistent interrogation of a subordinate who has something he needs.

Both plays are staged on a platform surrounded by the audience in such close proximity that patrons feel like they are inside the claustrophobic rooms with the characters. Working with modest budgets, the inventive Mad Cat team always has created unique environments. Deborah Sherman’s character-revealing costumes reflect a divided society under siege from Stanek’s well-worn red smoking jacket and tuxedo pants to the Brewmaster’s deteriorating work clothes.

David Nail’s deft lighting creates a variety of moods. He keeps the illumination dim in the opening scene of Protest when a power outage forces Stanek to light his home with candles, but then bathes the room in a sickening amber once power is restored.

Mad Cat, of course, cherishes its particular outré aesthetic designed to disorient patrons from the moment they walk in. So set designers Nail and Tei cover the stage with a canopy of aluminum foil. Silvery material wraps around props and the stage’s apron. Silver inflated balloons and snake-like streamers festoon the walls. What that means as far as Havel’s plays are concerned isn’t clear other than to unsettle the audience. But that extends to Matt Corey’s terrific soundscape setting the unnerving anarchic tone. Even Sherman nastily greets the audience at the ticket booth (apparently an intentional reference to the fact that in state-run theaters, the employees don’t have to be polite).

Twenty-First Century Western audiences may be a bit impatient that Havel’s characters repeat themselves over and over or set off in seemingly interminable discourse whose point the audience understood quickly enough. But Havel is intentionally creating endlessly cyclical nightmares akin to a hellish Groundhog Day in which the repetition or the meandering is part of the torture.

What screams with relevance—at least to liberal and progressives minds – is what was once considered a twice-removed fantasy rife with paranoia and betrayal is now a scenario not as fantastical as it once seemed.

Mad Cat, ever steadfast to its mission, once again deserves special acknowledgement for being one of the only companies in the region other than Thinking Cap Theatre in Fort Lauderdale who would attempt such material, let alone prevail. Sometimes their idiosyncratic work doesn’t land solidly, other times they triumph. But the community should be grateful that someone has this courage and vision – and should express their gratitude with their attendance.

Side note: The current configuration of the black box space only has about 30 seats, so if you’re interested, reserve tickets early.