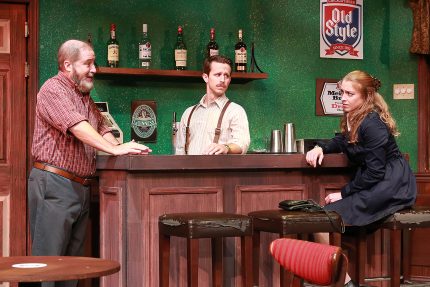 I need to get this out quickly.

I am begging every critic colleague, everyone who has been to see Actors’ Playhouse’s Now and Then to NOT give away anything! Tell your friends you had a terrific time, but do NOT spoil it. Any of it.

One of the many pleasures in this drama laced with humor is watching the story unfold bit by bit, knowing something is going on underneath but enjoying how layers are peeled away.

So this is going to be a difficult review to write. You may just have to trust me.

At its center are themes about second chances, second thoughts, dreams, regret about the past, fear about the future, choices – all delivered with sufficient laughs, but also with a deep compassion for the complex experience of living, especially as the years amass over time. The closest I’ll get to a spoiler is that the play asks what if you had the chance to change the direction of your life?

Sean Grennan’s insightful, moving and droll script is a solid piece of writing. But it is catapulted by the performances of four actors working at the very top of their game – Stephen Trovillion, Laura Turnbull, Mallory Newbrough and Kristian Bikic – and expertly molded into a whole by director David Arisco.

I fear I’m prepping you to expect Shakespeare or O’Neill. No, this is a quiet, intimate story that dives deep into people rather than some epic opus, a tone that has graced Actors’ Playhouse’s upstairs theater many times.

Let’s see how much I can get away with telling you.

We’re in Mulligan’s, a classic Irish bar in Boston in 1981 where Jamie (Bikic), an affable young bartender, is about to close the empty saloon. An even more affable man in his late 50s enters (Trovillion) asking just to hang out for an hour past closing. After the man desperately begs the favor, Jamie reluctantly agrees. But soon the two are telling each other stories with Jamie revealing far more than the man.

Jamie says that he hopes to be a jazz pianist but he will need to quit this job and really bear down to achieve it; the mysterious man reveals he was once a music teacher. Eventually, Jamie’s girlfriend Abby (Newbrough) arrives from her waitress job at the nearby IHOP, but dreaming of studying literature in college. She, too, gets pulled into the conversation. When the couple begins to balk at the man’s increasing strangeness, he offers them a large amount of money to let him stay here an hour. And then things get really weird, fueled by considerable liquor.

I can’t even reveal who Turnbull plays, but she turns everything upside down once again.

What draws in the young people and the audience is that the man’s warm smile and shining eyes seem to register everything he says and sees with some underlying secret rue. And then… well, no, I can’t tell you that. Well, no, not that either. Just trust me.

Hopefully suffice it to say, the plot takes a significant left turn as the man goes to extremes to stay in the bar for a while. Suffice it to say that his objective, his past go beyond what you expect. And suffice it to say, that while this is all played with a degree of theatrical naturalism, there’s an upcoming offbeat deus ex machina that the audience must accept. We do accept it because of the cast’s and director’s ability to have hooked you into the narrative long before “the truth” is exposed.

First, welcome back Trovillion who has retired from teaching and has moved back to South Florida. While he has done some drama locally (considerably more around the country), he is likely best known here for his comic walk-in closet of characters gifted us in 16 seasons of Summer Shorts.

So his superlative dramatic work here may be a surprise to some. But he and Arisco have created a genial creature clearly harboring a secret or many secrets. Trovillion expertly communicates this underlayer to the audience in all he says, and yet credibly buries it enough that Jamie and Abby don’t tumble to anything seriously out of place for quite a while. This is award-worthy work.

Of course, Turnbull long ago earned a reputation for completely inhabiting characters you might recognize as your next-door neighbor who happens to be dealing with dramatic situations. Her character exudes spirit and intelligence roiling under an emotionally life-scarred exterior.

If I was a theater teacher, I’d bring my students to see this masterclass by Turnbull and Trovillion.

No less praise is due the others. It’s been too long since we’ve seen Bikic other than in Miami New Drama’s The Cubans. He gives us a likable Jamie who is clearly at the cusp of life-directing decisions and yearning for a satisfying future.

Once again, Newbrough’s skill clearly grows role-by-role from her Carbonell-winning Janis Joplin in Beehive through her compassionate girlfriend in Palm Beach Dramaworks’ Equus. She also invests the appealing Abby with both spirit and a deep love for Jamie.

Arisco is an acknowledged master at staging musicals and farces. But sometimes we forget how adept he is getting complex dramatic performances out of actors, how invisibly and deftly he stages a show, and how sometimes he can create a bit of magic as he does here.

Grennan’s work has been performed here before: Married Alive!, Another Night Before Christmas, Making God Laugh and The Tin Woman. But this shows a significant uptick in skill and focus.

This has been a somewhat more active summer than usual because several companies started their seasons later in the year in hopes that patrons would feel more comfortable that they had outlasted Covid. So Fade at GableStage and Now and Then at Actors’ Playhouse are the last plays in their formal seasons. Indeed, Fade actually was the last script that the late Joe Adler bought the rights for before he died and Now and Then was slated to bow in July 2020.

All I can say further about Now and Then is that most theater critics always have a piece of their mind recording and analyzing throughout a performance. Unlike film, it is rare that there comes a point about two-thirds of the way through where we forget to take notes and just savor the play. I did this time.

One Response to Can’t Tell You Why, But Savor ‘Now and Then’ When You Can