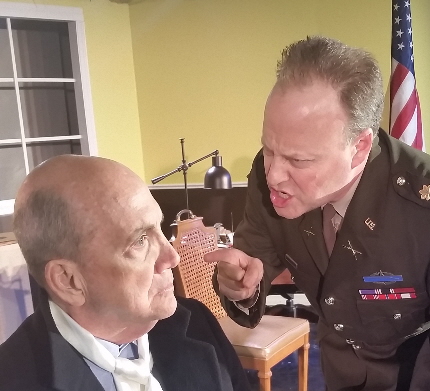 What is the artist’s responsibility, indeed, what is the role of Art itself in a repressive heinous political environment? Can the edifying aims of Art and the cold cruelty of Politics exist on hermetically separate planes or are should they be inescapably intertwined?

Ronald Harwood’s intriguing play 1995 Taking Sides pretends to leave those answers to the audience at the Chicken Coop Theatre production in Boca Raton, but it does depict radically different viewpoints and shamelessly stacks the deck.

Much of the script – a best new play winner in London – is disappointingly simple and single-minded until the last 15 minutes when Harwood (The Dresser) finally lets loose a cyclone of clashing intellectual and moral arguments that nearly make up for the unsubtle bulk of the evening.

The production also boasts a couple of solid performances, but it’s seriously crippled for most of the show by the central actor’s loud unvaried sledgehammer acting job with no nuance, perhaps because the actor is also busy being the play’s director.

Loosely based on real events, the play is set in Berlin 1946. American officer Steve Arnold is investigating whether world-famous orchestra conductor Wilhelm Furtwangler was a willing collaborator with the Nazis as their pet musician or whether he unwillingly endorsed Hitler, Goebbels and Goering by performing for them and accepting honors from them. Why didn’t he just refuse to perform or leave the country?

As underwritten by Harwood, Arnold (Tony Rein) is a profane, bulldozer blunt, former insurance assessor with no love of culture and who sports the most extreme — frankly an unbelievably extreme — obsession with discrediting and destroying the man he calls “a bandleader” regardless of facts, truth or justice. At all times, Arnold is a raging (insert a scatological term of your choice).

By intentional contrast, Harwood creates Furtwangler (Jeffrey Bruce) as a chilly, dignified artist who maintains a stonily composed exterior although he is desperate to be allowed by the new government to resume his work as the leader of the Berlin Philharmonic. Rarely does he let loose his inner rage. But when faced with never holding a baton again, he furiously complains that the Americans have allowed admitted Nazi Party members to continue working in the arts in public venues and even emigrated Nazi rocket scientists to the West.

The play’s key scenes are head-to-head battle of wills in interrogations of Furtwangler. Additionally, Arnold questions a former second violin player (Alan Gerstel) for information that can be used against Furtwangler while the questioning is observed by aghast German secretary (Krystel Mills) and a young military aide (Nicholas Rapuano). The widow of a Jewish pianist (Yasmin Adli) tries to give Arnold written evidence of Furtwangler’s aid helping Jews escape Germany. When Arnold blithely rejects the documents, she contends that he is no different than the Fascists.

While Furtwangler is not a likable person, his love is obvious for music as a pure pursuit independent of the tumult around it. When Arnold says that Furtwangler’s decision not to escape in 1934 is evidence of his collaborationist tendencies, the conductor convincingly argues that he loves his country and its people; he could not desert them and could not deprive them of art that could succor their souls. Arnold doesn’t buy it.

As objectionable as Arnold is, he does begin to crack Furtwangler’s veneer. He claims Furtwangler was seduced by the acclaim and privileges that the Nazis poured on him. Further, he suggests that the presence of the up-and-coming Herbert Von Karajan threatened Furtwangler’s primacy and caused him to comply with the Nazis to protect his position.

The play ends with a lot of screaming and yelling. In the dust, we understand Arnold a shade better and see Furtwangler as less of a blameless player. But Harwood has stacked the deck all along for the audience to take Furtwangler’s side.

Rein has played the part before, but as a director he either lacks the skill or the distance to give Arnold more than a couple of speeds: objectionable and really objectionable, with some occasional explosions of rage. He scowls contemptuously a great deal. Rein had an assistant director but apparently she could not get him to dial back the amateurish shallowness except in a few stretches in the last half-hour.

On the other hand, Bruce has delivered a wide variety of secondary roles in local productions, but none of them had the polish and skill that he displays here. He perfectly captures Furtwangler’s near arrogance in the certainty that his supreme skill elevates him and his Art somehow apart and above the prosaic fray that was Nazi Germany. He has an aristocratic mien, not born of bloodlines but of cultural breeding. As Arnold begins to poke holes in Furtwangler’s rationalizations, Bruce’s eyes lose that gaze of looking past something distasteful and instead betray pain at the knowledge that he might not done all he should have.

Alan Gerstel, another workhorse in small roles or leads in small theaters, also gives one of the best performances we’ve seen him offer in recent years as the former second violin player, a nervous broken man who initially seems to revere Furtwangler, but who is willing to make the very moral compromises that Furtwangler is accused of. His speeches about what it felt like to be an ordinary citizen overwhelmed by the juggernaut of Nazism provides one of the few unnerving moments of the evening as he makes you wonder what your own reaction would be.

Harwood’s script has several crucial problems. To begin with, he makes Arnold such an abusive monster (elements played to the hilt and beyond by Rein) that 85 percent of the play put the audience in Furtwangler’s camp.

Further, the driving source of Arnold’s unbridled vitriol isn’t revealed until the last couple of scenes, although its hinted at early on.. Since Rein plays Arnold for nearly two hours as a nasty jerk without any explanation, it’s hard for audiences to believe Arnold’s extreme behavior that starts in the opening moments and lasts until the final curtain.

Finally, Harwood may list documented facets of Furtwangler’s character, but they are seemingly irreconcilable. Specifically, he risked his life to help Jews escape Germany, but he was recorded making anti-Semitic statements. Arnold says the humanitarian actions were a small-scale smokescreen while Furtwangler says the racist comments were only made directly to Nazi officials to gain their trust.

Taking Sides is a call for artists to accept that they must take sides in the real world and Harwood leaves little doubt which side he wants you to adopt.