Death Looking Over Your Shoulder Is Gentle Comedy

Posted on December 9, 2019 by Bill Hirschman 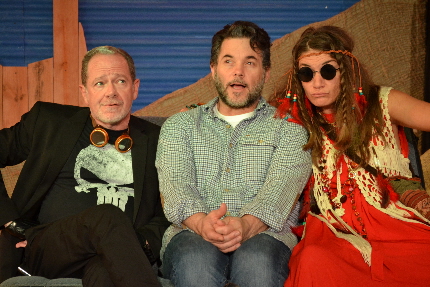 Zorba the Greek tells of a very old man planting a sapling he will never see blossom. The old man explains that he lives as if he will never die, to which Zorba responds, “I live as if I will die any minute.”

How we deal specifically with the inevitability of death, whether we let it inhibit us or inspire us, is at the heart of Michael McKeever’s comic fantasy Charlie Cox Runs With Scissors now enjoying a wryly funny production from the West Boca Theatre Company.

And it is funny as we realize – minor spoiler alert – that the hero’s wise-cracking sidekick in black wearing a Marvel The Punisher skull T-shirt turns out to be Death for the titular hero dying of Lou Gehrig’s disease.

Actually, it’s not Death himself from the Seventh Seal but Cox’s specific Death, first name “Wally,” who has been shadowing him since birth, a feeling some people have sensed at least metaphorically for their entire lives.

The impossibly average, borderline boring Everyman Charlie Cox believes he has 18 months to live at best. He starts on a purposeless road trip through the Arizona desert. Along the way, he sees Wally hitchhiking holding a destination sign “Nowhere.” He picks up the garrulous character who seems to know – and run down — everything about Charlie’s empty loveless life.

The car breaks down near the isolated Lost Oasis motel/gas station that has had no other customers for days. Charlie – a book editor too timid to attempt his own work — decides to hang out and leave a legacy by “writing” his life story by dictating it into a tape recorder. Wally “helps” by recreating scenes and critiquing Charlie’s distinct lack of pursuing anything. Indeed, since Charlie has run away from everything his entire life, he runs out of material early on.

His presence does fascinate Nell Todd, the recently widowed motel owner caring for her dying father-in-law and fencing with the attentions of Travis, a burly wrecker driver.

Charlie is getting closer to succumbing to Wally’s suggestions that he end things prematurely when suddenly appearing is Kiki, a classic hippie chick for whom the ‘60s are not over, who is actually the Love counterpart to Wally. With verbal jousting and running sidelines commentary on Charlie and Nell, the two invisible spirits of Love and Death fight to win over Charlie at his crossroads.

Kiki implores him, “Your mama told you: don’t stray too far, don’t talk to strangers, and don’t go running with scissors. And you bought it…. I mean, have you ever even considered doing something that wasn’t safe? Have you ever taken any risks? Have you ever truly lived?”

If this doesn’t sound like a laugh riot, it’s partly because the plentiful humor is so character-driven — and because nobody but nobody can deliver a McKeever the playwright line like McKeever the actor with a wicked wit echoing Oscar Wilde and Noel Coward. Indeed, it is McKeever playing Wally with sardonic sarcasm and the bemused playfulness of someone who knows how this is all going to play out — and slightly impatient with Charlie’s de rigueur denial and avoidance.

“Everyone’s always vilifying death,” he says. “But when it comes right down to it, it’s life that really sucks. All death does is come along and clean it all up.”

Everyone gets the little bon mots. Nell talks about her husband successfully pressing her to fulfill his idyllic dream of living in the desert. Left here after his death, she quips, “Believe it or not, this is what it ended up being. It’s like communism. It looked so much better on paper.”

Or Kiki enthuses, “Isn’t this all just so Barbara Cartland? Two men, one woman, love and death all in the same room. It’s a situation ripe with possibilities.” To which Wally snipes, “It’s ripe alright.”

Additionally, the production is helmed by Stuart Meltzer, one of the region’s most able directors and an old hand at directing McKeever’s work. He knows the precise rhythms to employ and how to seamlessly weave in the gentle compassionate underlying message that is at the play’s heart: Make the most of the time you have; the actual amount of time is irrelevant.

Meltzer has assembled a strong cast, notably Todd Bruno who must capture the audience’s loyalty and carry the narrative of the show while inhabiting the hapless loser Charlie. Recently, Bruno has delivered solid performances such as the former high school bully under public scorn a decade later in Island City Stage’s White Plains and the besieged father in New City Players’ Falling. With bright wide eyes and an expressive face, Bruno convincingly reflects Charlie’s angst, pleasure, surprise, fear and denial that “I can’t be dying… I haven’t lived.”

Similarly, Gretchen Porro makes a wild-eyed exuberant goofball as Kiki Love who late in the game provides a worthy adversary to Wally. Jeanine Gangloff Levy is the lovely widow who moved from Laurel Canyon where her acting career tanked. Alex Alvarez makes the audience sympathetic to Travis and his crush on Nell.

This play originally called Running With Scissors is one of the earliest produced plays of South Florida’s most prolific playwright. Its premiere at Florida Stage in 2003 marked a crucial breakthroughs that has led to more than 20 productions across the country and around the world. It won the Carbonell Award for Best New Work.

This theater company has a reputation for earnest but modest productions. But this time, they have attracted an array of first-rate talent, starting with Meltzer who co-founded Zoetic Stage in Miami. Meltzer appreciates simple but effective production values, so he hired David Hart to provide extensive sound effects, Ardean Landhuis delivered the effective lighting and scenic design setting the desert milieu. As usual with a Meltzer production, scene changes are imbued with appropriately atmospheric underscoring of music

The entire evening is a sustained smile, not just one of humor, but of gentle compassion for all of us dealing with inescapable mortality.