Posted on December 8, 2012 by Bill Hirschman 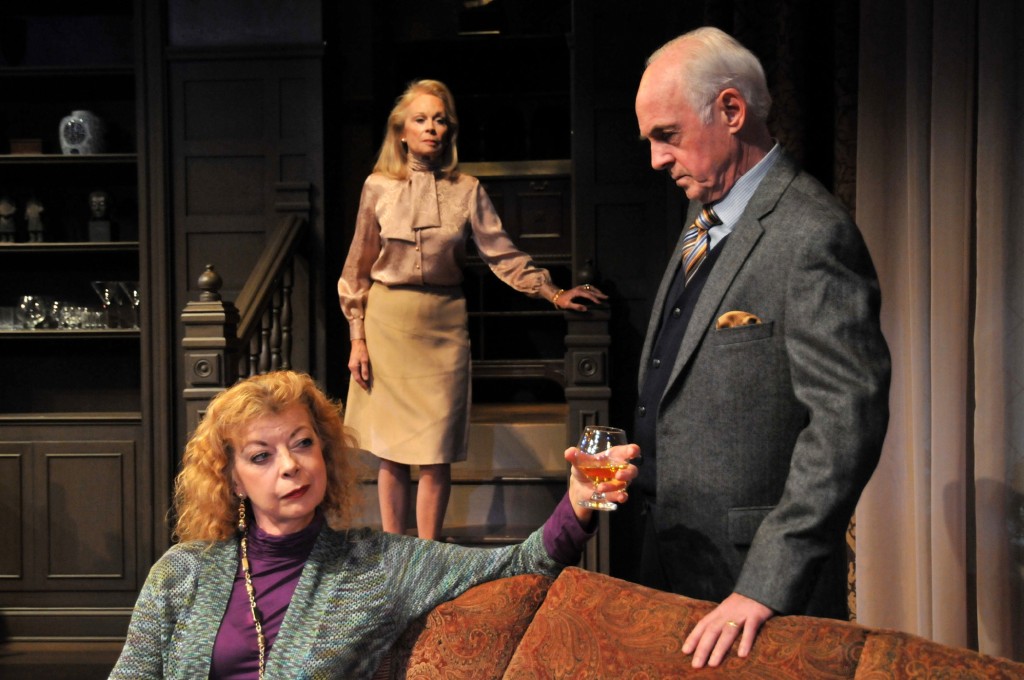 A nameless terror has upended the fragile homeostasis in Agnes and Tobias’ carefully-ordered uppercrust existence, all the more frightening because its anonymity makes it uncomfortably universal for the audience at Palm Beach Dramaworks’ production of Edward Albee’s A Delicate Balance.

But the arrival at their front door of their best friends seeking permanent refuge from this virulent dread is only a surreal catalyst. It mercilessly forces Tobias and us to scrape away the polite lubricant of societal conventions and mores to examine the absolute truth of our relationships with those we say we love.

What starts as a play about a troubled family of privilege, which keeps our attention simply because they are engagingly hyper-articulate, then ends as a shattering indictment of self-deception and hypocrisy in human interaction.

This laudable production is not for everyone, in part because Albee has written such a difficult and disturbing play, but also because Albee has created a never-flagging torrent of rich ideas passing by too quickly to savor. It’s like chugging a connoisseur-worthy wine. A smart audience member will just be grateful for the intermittent cups they can grab of the flood that rages past them.

This is Albee’s fault, if it can be considered a fault. There’s only praise due the deft direction of William Hayes and the top-flight cast led by superb performances from Maureen Anderman, Dennis Creaghan and Angie Radosh.  The text is so sadistically challenging with its half-sentences, pauses and ambiguities that the cast was still trying to nail it down opening night after only three weeks rehearsal. As with Shakespeare and Sondheim, the cast will doubtless be finding new dimensions at the closing matinee four weeks from now.

This 1966 play has echoes of Albee’s earlier Who’s Afraid of Virginia Woolf with its wicked wit, educated people spouting aphorisms and alcohol-fueled descent into the core of human failings. Like his later Seascape and The Goat, or Who Is Sylvia, he uses a bizarre spark to turn a comfortable paradigm of everyday life inside out.

The first act sets out the supposed relationships of characters present and soon to arrive. Agnes (Anderman) and Tobias (Creaghan) are stiff-upper lip patricians who have settled into retirement in their understated suburban mansion. Like some marriages, their union is not so much idyllic as having found a comfortable accommodation of personal weaknesses and past sins.

The titular balance not only encompasses but embraces the chronic return of Agnes’ younger sister Claire ( Radosh), a burned out truth-telling cynic who says she can’t deal with the positive-thinking Alcoholics Anonymous because she is not an alcoholic, she’s a hopeless drunk. Her cardinal sin in her sister’s eyes is a lack of the gyroscopic self-control that the couple prize. And their middle-aged daughter Julia (Anne Bates) is en route home again after the disintegration of her fourth marriage. This flinty family has its share of willfully ignored secrets, sorrows and repeated disappointments that now feel like betrayals of trust. While these people may be dysfunctional themselves, they have cobbled together a functional framework.

Albee documents these well-worn pathways by the characters’ wearily referencing past attempts to solve each other’s problems. The women in particular snipe at each other with martini-dry thrusts worthy of the Algonquin Round Table such as Claire embracing Julia at one moment, then saying a bit later, “You don’t look bad for a quadruple amputee.” Like George and Martha, they know each other’s vulnerable spots and no longer worry about jabbing them.

Agnes is the self-described fulcrum of the family who keeps the ship moving. But it is Tobias who she relies on to chart the course. But Tobias lovingly if deftly sidesteps being a direct player or referee in any bouts when he can avoid it.

That ends when the couple’s best friends and doppelgangers Harry and Edna (Rob Donohoe and Laura Turnbull) appear at their door gripped by a terror that came over them sitting at home. Like lost children, they ask if they can stay. At first, it seems to be just for a night, but then they announce their desire to stay permanently.  This sits badly with Julia who needs all the mothering she can get right now. Further, the new arrivals instantly install themselves with an authority that makes Edna believe she can criticized Julia’s self-indulgence.

Clearly, no one wants them to stay, especially Agnes who believes they have brought a psychic plague with them. But Tobias has defined his sense of self-worth in his professed relationship with Harry and Edna as his best friends. He must analyze just what that relationship is and, by extension, the genuineness of his relationship with the people he loves. Someone asks Tobias, “What do you have in common with these people?” and later, “Would you give Harry the shirt off you back?” They are questions Tobias would have given a knee-jerk assent to before this night. Now, his bluff has been called and he must actually answer.

The cast is peerless. Anderman, a part-time West Palm Beach resident, brings every ounce of her Broadway experience and her personal connection with Albee (she starred in the original Seascape and The Lady From Dubuque.) Her skill at navigating Albee’s lush but cruelly Byzantine verbiage is amazing; she makes it seems almost effortless when it is, in fact, heavy lifting. We’ll bet the visible but stunning display of craft required will vanish within another week. Acting students (audience, don’t read this) should watch how she uses her hands, such holding them out with fingers spread as if to ward off distasteful subjects. Notice how she cocks her head or shakes her perfectly coiffed hair. Her voice is clearly a Shakespearean trained instrument. We are anxious to see her as the stern nun in Doubt at the Maltz Jupiter Theater this winter.

While Agnes is the flashiest role, the plot actually tracks Tobias’ growth.  Creaghan’s perfectly-rendered Tobias is a reminder that when he returned here several years ago, he was an expert in playing these Brahmins, not the depraved or drunken creatures in American Buffalo, The Seafarer and A Behanding In Spokane. His Tobias is never a caricatured fuddy-duddy or snob, but someone for whom a smooth well-ordered existence is a virtue and a prize that has been earned. Creaghan skillfully slides Tobias along the play’s only character arc to agonized self-awareness, carrying us with him. It is likely Creaghan’s best work among season after season of terrific performances.

Radosh has long been one of our favorite actresses for her vitality, imagination and the unique reality that she invests in her characters, from her fresh take on Amanda in New Theatre’s The Glass Menagerie to the grieving woman in The Year of Magical Thinking at Women’s Theatre Project. Here, she is blessed with some terrific drunken entrances including playing an accordion and some of Albee’s most cutting witticisms. Radosh finds and combines Claire’s self-disgust and intelligence as smoothly as the liquor she swills. As a reminder of Radosh’s   range, some might remember that she played Agnes in the Caldwell Theatre’s production in 2000.

Bates, a New York actress, is fine as Julia, especially in her bewilderment that her parents don’t immediately throw over their friends for a blood relative’s needs. Donohoe, seen in Dramaworks’ The Pitmen Painters last season, is especially good in his penultimate scene the most inarticulate of the sextet (with Albee’s toughest syntax) struggles to hash out with Tobias what each should do.  Turnbull, simply one of the region’s best actresses, communicates Edna’s fear, but also makes convincing Edna’s seemingly presumptuous claims on the rights of a blood-related family member.

As usual, Hayes’ physical direction is nearly invisible, which allows us to focus on the words and ideas. A devotee of Albee (this is the sixth of his works at Dramaworks), Hayes has concentrated on working with the cast to successfully decipher what they can of the tortuous script. His pacing seems to be in perfect sync with Albee’s intent, which may be a bit more stately than some audiences want but is dead right for the piece.

We should have a time-saving macro on the keyboard praising Michael Amico’s set designs. This time, he created the elegant dark wood-paneled living room of an old-money family decorated with his usual attention to detail, from the leather-bound volumes in built in bookcases to the cut-glass highballs, goblets and snifters on the bar. A nod, too, to Erin Amico’s character-revealing costumes that, while set in the 1960s, could be seen on Worth Avenue tonight.

A Delicate Balance is considered one of the last of the “early” Albee works to be critically and popularly embraced. It deservedly won him the first of his three Pulitzer Prizes in 1967. (One of the shameful scandals in Pulitzer history was the committee’s timid refusal to give any award the year that Who’s Afraid of Virginia Woolf  bowed.) By this time, he had found his heightened lyrical voice, luxuriating in characters who spoke in lazy reminiscences, allusions and extended metaphors that lead Hayes to call Albee “our modern-day Shakespeare.”

If this production feels like it needs a little more development, so does any production of King Lear. The notoriously finicky and curmudgeonly Albee would be proud of this uncompromising edition.

Side note: Dramaworks will host Southeastern premiere screenings of the documentary The Stages of Edward Albee at 2 p.m., 5 p.m. and 8 p.m. on Jan. 8. The film, which premiered at the Dallas Video Festival in September, looks at Albee’s life and art through interviews and readings from selected plays. In addition to Albee, the filmmakers James Dowell and John Kolomvakis interviewed  playwrights John Guare, Tony Kushner and Terrence McNally, and actors Rosemary Harris, Bill Irwin, Judith Ivey, Bill Pullman, Marian Seldes and Kathleen Turner. Irwin, Pullman, Seldes and Turner also appear in readings from The Zoo Story, Who‘s Afraid of Virginia Woolf? and Three Tall Women.  Tickets are $10.