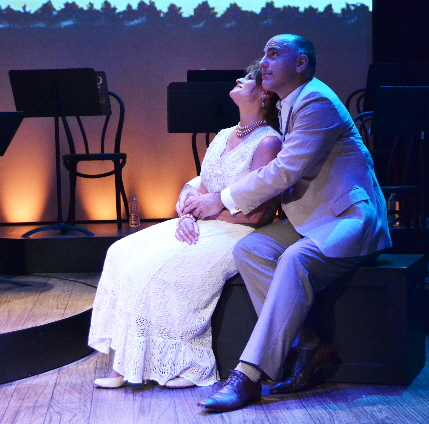 “What fools these mortals be.”
–Puck in A Midsummer Night’s Dream

Life is bittersweet marked by rue and romance in which those foolish mortals submit and succumb to the whirling winds of love and lust in Palm Beach Dramaworks’ concert staging of Stephen Sondheim and Hugh Wheeler’s glorious A Little Night Music.

Smiles of a Summer Night is the wry title of the 1956 Ingmar Bergman film that Sondheim, Wheeler and Harold Prince used as the basis for their 1973 musical and that’s precisely the tone suffusing this lovingly sung production.

Night Music is arguably the most mainstream and accessible of Sondheim’s work since much of the music is written in lilting ¾ time that pulses with restrained passion and the lyrics are a mixture of wit and wisdom, all built around Wheeler’s deft knowing script that celebrates the folly of ardor-fueled pursuits.

If Into The Woods is a favorite with general audiences and Sweeney Todd the favorite of fans of sheer technique and Sunday in the Park With George speaks directly to the creative souls among us, A Little Night Music is Sondheim’s adult musical that echoes feelings best appreciated by those with a few years of hard-won experience in relationships.

The score, script and this production portray with sympathy and bemusement a series of characters from various classes in turn of the century Sweden as they pursue each other, some for true love, some for carnal pleasure, some for self-aggrandizement, some seeking to recapture their youth.

The swirl of interlocking characters roaming the lawns and woods of a country estate are Desiree Armfeldt (Kim Cozort Kay), a popular but aging actress growing weary of the road; Fredrik Egerman (William Michals), an older lawyer who was once the dearest of her many lovers; Anne (Lillie Ricciardi), his sheltered 18-year-old child bride who has shied from consummating their marriage; Madame Armfeldt (Joy Franz), an elderly former courtesan and mistress to kings who is Desiree’s mother; Fredrika (Catharine League), Desiree’s out-of-wedlock teenage daughter whose name is a clue to her parentage; Count Carl-Magnus Malcolm (Aloysius Gigl), a puffed blowhard of a military officer who is Desiree’s current beau; Countess Charlotte (Ruthie Stephens), Magnus’ sharp-witted wife who is torn between her love for him and her disgust at her acquiescence to his serial adultery; Petra (Christina Flores), a lusty maid seeking pleasure at most opportunities; and Henrik (Clay Cartland), Fredrik’s studious stuffy son by an earlier marriage whose devotion to his seminary studies is being unhinged by his growing attraction to his new stepmother.

The Byzantine complications are augmented by the decidedly Scandinavian acceptance of sex as a guiltless pleasure akin to a fine meal. We’ll bet that it’s not accidental that in an evening about romance, few of these characters directly say the word “love,” even though that is clearly what they all long for.

This fine, fine cast with strong faultless voices, recruited locally and from New York, has been led by director Lynnette Barkley and musical director Kevin David Thomas in Dramaworks’ continuing series of summer concert musicals, which are so immaculately produced and well-staged that they seem more like fully-realized chamber productions than fiscally conservative ventures trying to cut overhead.

Everyone here is on the same page. There are no singing cowboys in production numbers, crashing chandeliers or witches singing anthems of sisterhood. The tone and temperature is correctly set at cool compassion and amiable amusement.

Nowhere is this more evident than when Cozort sings Sondheim’s Greatest Hit, “Send in the Clowns.” Like an actor trying to figure out how to deliver “to be or not to be,” each actress playing Desiree has sought to find a way to make their take memorable and even unique when it has been done to death by hundreds of predecessors on stage and in cabarets. It’s a terrific song, although Sondheim wrote better, and it’s not technically hard to sing because Sondheim tailored it to the limited and throaty range of his first Desiree, Glynis Johns.

But Cozort, once a frequent leading lady at the Caldwell Theatre and seen all too infrequently now, nails the number with her own phrasing and she underscores an almost tactile yearning at a lost chance and what now may be a last chance at true love.

But there are several other standout performances. Michals, whose warm deep baritone graced Dramaworks’ The Most Happy Fella and Man of LaMancha, invested the entire evening with a sense of a mature assured adult suddenly awash in buffeting forces inside him and outside him that he cannot control.

The couple’s chemistry is adequate if not outstanding, but both exude that shared sense of having made their beds, lain in them and have ached with regret ever since.

Franz, who created the role of the stepmother in Into The Woods years ago, embodies the wise observer and dispenser of advice. Her voice as she sings “Liaisons” is saturated with elegiac relish as she remembers the lost glories of her life as a mistress and as she watches the world she knew slip away.

Finally, Stephens perfectly portrays the conflicted wife who fails to conceal her pain with a quiver-full of acerbic shafts for every occasion in the ineffably tender ballad of agonized ambivalence, “Every Day A Little Death.” It is a tribute to her acting skill that it is hard to imagine her recently playing the Jewish drag queen/husband Yitzhak in a Boston production of Hedwig and the Angry Inch.

Actors still hold scripts as an occasionally-glanced-at safety net and there were still a few bobbles of Sondheim’s sadistically twisty lyrics on opening night. But they are surprisingly smooth in the delivery with none of the hesitancy one associates with readings. Barkley, who is also a choreographer, moves them around the stage on swirling waltzes and places them in varied tableaus to banish any sense of static staging.

A key concern ahead of time was the music. The show would seem to demand a large lush orchestra. But here, Thomas doubled as pianist with just Christopher Glansdorp on cello and Phil McArthur on violin with an occasional stint by Ms. Guy on oboe. The result was surprisingly solid and unassailable. Anyone who has listened to the cast album will miss the heft of the full sound, but this was as deft a substitute as you can imagine.

Other than traditional boxes and chairs used for furniture, the scenery is limited to a procession of stage high projections depicting Impressionist-style paintings of flower-bedecked woods and the endless evening in which the moon reigns. Thomas Shorrock’s fluid and dappled lighting design helps communicate the change of scene. Linda C. Shorrock’s costumes are period-appropriate summer clothes with vests and ruffles in shades of white, beige, tan and ecru. Richard Szczublewiski’s sound quality is among the best in the region.

This critic is a Sondhead, which sometimes raises the bar too high for any production. But this one made me want to go back and see it again.

Night Music is a laid back rumination and some people might find it a tad slow, but the Dramaworks’ production underscores that it’s a work of reflection for a quiet summer stroll under the stars and, oddly, of hope.