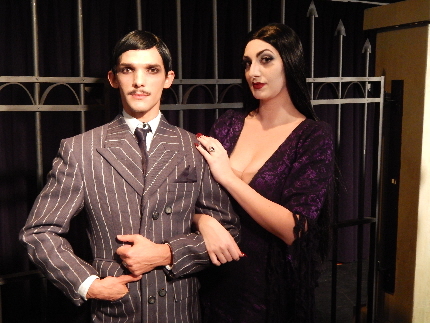 The difficulty sorting out the virtues and flaws in Evening Star Productions’ The Addams Family is separating the admirable, ambitious and unflagging efforts of this fledgling troupe and what can be laid off on a congenitally flawed piece of material.

There’s enough giggles and grins delivered by these game, committed thespians to keep this production mildly diverting, but they still are finding their artistic chops and they still are chained to a script and score that devolves from the strychnine into the saccharine.

At the same time, this group, operating on a shoestring budget out of a theater slipped into a Boca Raton strip shopping center, throws themselves so completely into this silliness that the audience has no choice but to be a curmudgeon or open themselves up to have a good time.

The Addams Family is a 2010 musical loosely based on the three films from 1990s, even more loosely on the 1960s television series and only tangentially on the initial single-frame cartoons in The New Yorker by Charles Addams, despite his heirs insisting on the exact opposite.

In this iteration, the mordant Wednesday (Nicole Kinzel) is grown and wants to marry a straight-arrow boy from Ohio, Lucas Beineke (Christopher Mitchell). Her father, the exuberant Gomez (George Macia) suspects his funereal wife Morticia (Samantha Streich) will object to a mixed marriage.

You can work out the plot from there, as can your 11-year-old.

The entire troupe of guys and ghouls has the dash of panache and goofiness that the work requires, thanks probably to the leadership of director Rosalie Grant, who music directed along with Julia Langley.

Evening Star is a green offshoot of Grant’s Sol Children’s Theatre performing in a livingroom-sized venue in which the actors are virtually in the audience’s lap. In less than two seasons, it has tackled a wide range of challenges including The Comedy of Errors and The Gin Game. Its production values are quite modest including digital soundtracks. Some of its performers can sing pretty well; others aren’t as equally blessed. Some of its company are reasonably good actors; others need a lot more time on the boards to hone their passion and talent into dependable craft.

The standout here is Macia whose slightly-built Gomez has a huge grin and shining eyes almost bulging out of his head with a manic joy and a “joie de morte.” He has a modest but workable voice that embraces his Latin-flavored numbers with a pizzazz so vibrant you expect him to bite a rose in his teeth at any moment.

Close behind is Heuer constructing a tall, beaming yet childlike monster whose pallor and sunken eyes cannot hide an ebullience worthy of a winning emcee.

Everett is also memorable as the buttoned-down Midwest hausfrau who speaks in rhyming couplets and who comes happily unhinged at the dinner party.

Charles Addams wouldn’t recognize his creations in the television series or films either, but there was a certain shared mordant humor, albeit sanitized for the LBJ-Era family hour. But Addams is spinning in his grave over a musical that misses the entire point of the cartoons; it even includes uplifting Disneyfied messages about being who you are etc., etc. Near the finale, the once stuffy now uncorseted businessman shouts out, “Addams, you have changed my life!” That syrupy sentiment would put a stake through Morticia’s cavity where her heart would be.

The musical has always been a head-scratcher for the talent attached who thought this might make a musical in the first place. The script was written by Rick Elice (Peter and the Starcatcher) and Marshall Brickman (a Woody Allen alumnus) and who together wrote a little-known musical called Jersey Boys. The music and lyrics are by Andrew Lippa (The Wild Party) and the director was the inestimable Jerry Zaks.

The tryout in Chicago was legendarily rotten (the original directors were the designers). With insufficient time to do more than tweak it, it opened on Broadway where it limped along because Gomez was played by the inherently hilarious Nathan Lane. Then it was commendably taken back into the auto repair shop, overhauled and sent back out on a national tour in somewhat better shape although it was still fatally flawed.

And there are delightfully daffy bits: lines like Gomez’s quip “Wednesday’s growing up; she’ll be Thursday before you know it,” or lyrics about Pugsley’s worry that Wednesday will be leaving, “What if she doesn’t torture me anymore / What if she doesn’t nail my tongue to the floor?” And there is Streich’s Morticia leading a chorus line of the dead singing a jaunty “Death Is Just Around The Corner.”

None of the failings are Evening Star’s fault. But it still needs to evolve into more uniformly solid work. Still, The Addams Family production shows the troupe has guts and passion that ought to be rewarded.