‘Evita’ Plays To The Masses With Thoughtful Complexity

Posted on November 7, 2017 by Bill Hirschman 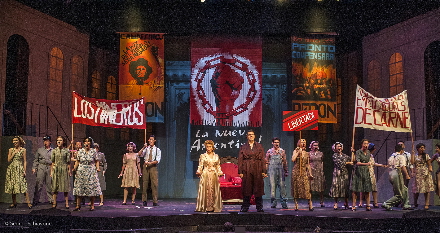 The cast of EVITA at Actors’ Playhouse at the Miracle Theatre / Photos by George Schiavone.

David Arisco has directed Evita for Actors’ Playhouse three times. So, what’s different this go ’round?

Well, to hear him tell it, the Andrew Lloyd Webber-Tim Rice musical, written four decades ago about a celebrity turned power hungry politico in mid 1940s Argentina is even more relevant than ever.

(In these United States, it’s probably not necessary to read between the lines of Arisco’s reference, and draw your own comparisons to current state of affairs. Hal Prince, who originally directed the show in the West End and on Broadway, said this about Evita in 1978: “It’s not about politics. Media manipulation, that’s what it’s about. And the fact that we have next to no idea who really lives in the White House, for whom we’re voting, what’s going on. We’ve learned too well how to package things, and now, people.” Hmmm.)

The first Arisco edition was in 1994 when the theater was producing shows in Kendall, and the second revival was in the Miracle Mile playhouse in 2000. That production was nominated for 12 Carbonell Awards that season

For this run, in addition to the aforementioned relevance (current state of affairs), there’s another significance for today’s South Florida theater audience: Following the three-week English-language run, the same cast will perform a three-week Spanish-language version.

While there have been other shows performed at the Playhouse for Spanish-speaking audiences following standard English runs, this will be the first time the same cast, especially all the lead actors, will remain in the Spanish language version. The cast will begin rehearsals next week for that later run while performing in the current production.

This bit of how-the-sausage-is-made knowledge adds an interesting depth – the rigors of performing in one production, rehearsing another in a second language, and re-creating the roles for another three-week run. Phew.

There are subtle nuances in this Evita that are so finite they might be missed, but are worth noting. The production is full of the proper pageantry that the show just begs for. There’s no deconstruction here of the original – lots of the prerequisite pomp. The use of turntable staging keeps the action moving, and, intended or not, could be a metaphor for the actress-turned-president’s wife revolving door of people she uses to get her to the top.

As long as we’re going deep here, perhaps I hadn’t noticed before although I’ve seen the production more than a few times, but speaking of metaphors, a mannequin in the opening Requiem scene, which doubles for Eva Peron’s body brought a chuckle. Consider this: the character is called out by Che as puppeteering so many of the people of Argentina, and here, in her death she’s nothing more than a mannequin. Yes, this is probably too much mental floss, but there’s a point to be made; it is this attention to detail that consciously, or unconsciously, adds a dimension for theatergoers who have seen numerous Evitas, from local productions to Broadway of this mass produced musical.

The birth of Evita, the musical, was actually born from a 1976 concept album. Webber and Rice had created it as a follow up to the similar Jesus Christ Superstar. Evita came to life on stage in 1978, directed by Prince, then on to Broadway in 1979 with Patti LuPone in the role of Eva, and Mandy Patinkin, playing Che, which ingrained their character portrayals for future actors of the roles forever.

For this production, the born in Los Angeles, living in New York, Colombian-American actress Andrea Pilar is reminiscent of a young LuPone both in her diminutive stature and, whether intentional on her part or maybe not, voice. The title role in the sung-through musical is taxing, and calls for a mezzo-soprano who can belt, where Pilar excels. But the singer also has to hit some powerhouse upper registers. There are times when this is required along with notes that are especially dissonant, and projecting these without becoming shrill is a tough exercise. Add to that, this all needs to come together just right in the cavernous Playhouse.

But, Pilar wins over her audience in so many other ways, coming out of the gate dancing up a storm and leading one of the most rousing numbers in the production early in Act 1, “Buenos Aires.” Time for another “phew” as the high energy from the stage seeps out into the theater, making for one muy caliente number. Pilar stands out, front and center, a triple threat of acting, singing, and dancing.

The actress manages to capture the character’s slyness, and if Pilar isn’t literally giving a wink-wink to the audience, there’s no denying when Eva turns up the charm, the actress has you in on the joke – even though her suitors and ardent on-stage fans are clueless. It will be interesting to see how she digs into Eva’s character in the Spanish version, which apparently portrays the master manipulator as a bit more sympathetic.

Pilar’s interpretation of “Don’t Cry for Me Argentina” is exceptionally deep as it straddles both worlds – one of compassion, yet with overarching self-involvement. You won’t cry for this Eva, for sure, but you may shed a small tear.

Eugenio Vargas as Che brings a boyish smarminess to the antagonistic narrator and voice of Eva’s detractors. His tenor voice is perfectly suited to the role, especially the stunningly scored “High Flying Adored” in Act II, and the song is wonderfully executed by the actor.

The baritone of Samuel Druhora brings a vocally strong interpretation of Juan Peron, who many times is portrayed as a mere supporting character to Eva. But not here. Druhora commands the stage with a richness and depth in his Peron that puts them on equal footing, most notably when the two meet in Act I’s “I’d Be Surprisingly Good For You.”

Kelly Ziegler as Peron’s Mistress interprets “Another Suitcase in Another Hall” as an emotionally fragile doe kicked out into the wild. (There have been others where it’s sung not so literally, and it gives the song more strength, but either way it’s a musical gem). Joshua Dobarganes brings out the “ham” in the character of Magaldi, the one hit lounge singer, and adds a triple dose of comic relief with his channeling of Elvis in his hip swiveling moves.

By the way, as a side note, in the Actors’ Playhouse’s 2000 production, now Tony Award winner for Broadway’s Dear Evan Hansen, Rachel Bay Jones, played Eva in both English and Spanish productions. She told Playbill about one of the biggest challenges of her career, when although she spoke no Spanish, lobbied to be in both runs of the show, and learned not only the lines en Espanol, but the language itself in short order.

Some microphone problems on opening night caused some minor glitches, but will no doubt be worked out. More uniformity of the soldier’s march will probably get better as the run continues so that the all-in-perfect-step-synchronicity leaves the audience with the always enjoyable “wow” factor in the number “Peron’s Latest Flame” near the end of Act I. It was missing on opening night.

If you’ve never seen Evita, in English, or, for that matter in Spanish, here’s a satisfying opportunity to fill that void. As a kick off to Actors’ Playhouse’s 30th anniversary season, this is a special and significant production.

Evita at Actors’ Playhouse in English through November 26. The production will then run Nov. 30 – Dec. 17 in Spanish. Performance times vary. Running time is 2 hours, plus a 15 minute intermission. Director David Arisco will lead a discussion group with actors and community guests following the performance on Nov. 10, 2017 as part of the company’s “Second Fridays” series. Tickets for weeknights and matinees are $57, and on Friday and Saturday evenings $64. The theatre offers 10 percent off all weekday performances for seniors and $15 student rush tickets to any performance 15 minutes prior to curtain with identification. Discounts are based on availability. Single tickets may be purchased through the box office at 305-444-9293 or online at www.actorsplayhouse.org. 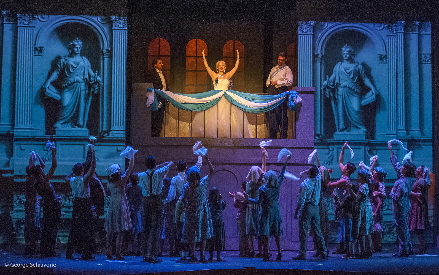