Posted on February 1, 2019 by Bill Hirschman 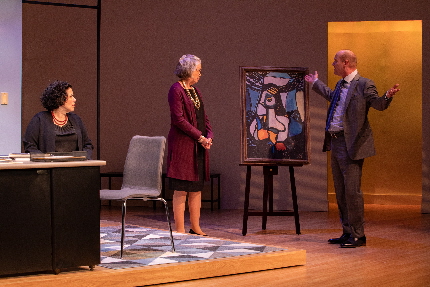 Like many world premieres in the current development paradigm, this play centering on a possible forged masterpiece about to be auctioned needs a good deal of additional work, but its promise gleams and begs for further productions.

Pelaez has carefully constructed a well-observed depiction about how those unrestrained passions, separately in service of all three aforementioned facets, can produce complex struggles and tragic results. While the playwright obviously comes down philosophically on the side of the purity and inviolability that art should maintain, she is not blind to the destructive cost, akin to the finale of Jean Giradoux’s play Electra.

Acknowledging the complexity of the issues (a minor but thematically crucial spoiler alert) Pelaez wryly provides a “Lady or the Tiger” ending. That allows the audience to debate a key question on the way home, and which allows the possibility that our heroine’s artistic judgment – but not her moral one – might or might not have been wrong for the prior 100 minutes.

The premise is that 30-something Camila is the fiery and ebullient head of the Latin American division of a major New York auction house. Her insight, talent and unrestrained zeal have helped the company prosper as the genre has become an increasingly promising source of revenue.

She is especially committed to promoting the work of her late great-aunt, Amelia Pelaez, an important Cuban Avant Garde artist, but whose work was confiscated by Castro’s government. A smooth but slightly disreputable middleman Roman (Philip Hernandez) produces a previously unknown work that a collector wants to auction as one of Amelia’s masterpieces.

The problem is that Camila doubts the work is authentic. Since her boss Margaret (Carole Monferdini) and the corporate auction house president Louis (Tom Wahl) have slated it to headline a major auction in a few days, money and reputation are imperiled by Camila’s investigation into the work’s provenance. It’s authenticity is already sworn to by Roman and the Cuban government culture chief (Vivian Ruiz) who wants to create a revenue stream from Pelaez’s work. Camila’s opinion is buttressed by that of the aging janitor Juan (James Puig) who has accumulated considerable expertise in his 40 years at the firm.

The swirling collisions provide a fascinating look at the ethics and pragmatism behind the scenes of the art world.

The script is also shot through with humor, such as “Roman would sell a dishrag claiming it’s the shroud of Turin.”

Or, in a remark greeted with laughs by the opening night audience, “I’m sick of these hack artists getting attention just cause they’re coming out of Cuba. If I see one more boat with wings on it, I’m going to freak out.”

That said, you may notice we didn’t tell you who plays Camila. And therein lies part of the problem. Carmen Pelaez, the Miami playwright well known for her one-woman show Rum and Coke, plays Camila Pelaez. Further, Carmen is, indeed, related to the real life Amelia Pelaez whose work is on display in the lobby.

So the script and the production have linked problems. Carmen Pelaez is consumed with passion and laudable opinions about the purity of art, etc. etc. Unfortunately, from the first moment of the play and throughout the night, Camila drops long speeches and pronouncements that allow the playwright Carmen to vent her opinions. Some insights are expressed lyrically and have inherent worth, but the playwright and director let them go on and on. That indulgence interrupts the narrative drive so that both Pelaez women can climb up on a soap box in the park and pontificate. At length.

Here’s an example, with one character’s interrupting line removed, “Oh God no. I prefer my artists dead. I don’t have the temperament to deal with a contemporary artist’s ego. They’re making hundreds of thousands of dollars as soon as they get out of Cal Arts for work that’s at best politically contrived and at worst boorishly self-involved. I’d much rather tune into what past artists created solely for the sake of beauty….Plus, I fell in love with the way art and the market collide. I mean–you have the artists who can only make sense of the world by making art regardless of the costs. Personal or financial. Then you have the market which can only exist in the world by commodifying that art – even though it‘s ultimate value cannot be quantified. It’s nonsensical and divine and random and precise and I get to play a part in its survival long after the creator of the art has passed.”

The related problem is Pelaez herself. Pelaez the experienced actress must deliver these proclamations from Pelaez the playwright; the fusion results in a performance with little subtlety to it. She announces these declarations in the acting equivalent of bold-face type. The audience cannot avoid the feeling that the playwright is speaking directly to the audience and that the play is just a perfunctory vehicle. One proof is that she gives a similarly overlong lecture-like speeches to Margaret, but Monferdini makes it feel more naturalistic. So perhaps another actress in the part might have been produced a stronger show. But so would some editing of the script.

Director Carl Andress, a veteran who keeps the evening moving quickly and smoothly, shares some blame for not serving as a dramaturg to curb the material. And he lets some moments fly by such as when one character caves in without even a moment’s hesitation to reflect any anxious deliberation. Also, some performers were still stumbling over lines in opening night.

This is unfortunate because, otherwise, Carmen Pelaez’s acting creation on stage as Camila is as engaging and winning as anyone could ask for. She drives the entire production with an energy and vitality. Carmen’s Camila is someone whose integrity you admire even when she is being hard-headed and obstinate.

As with past outings, Miami New Drama has not skimped on production values. The two offices on a rotating palette surrounded by a white art salon was by Christopher and Justin Swader, just Carbonell-nominated for their work on the last show One Night In Miami. The mood-changing lighting is by Kirk Bookman, just now double Carbonell-nominated for Equus and An Inspector Calls.