Dramaworks’ Spitfire Grill Is One Of The Season’s Finest Musicals

Posted on February 3, 2019 by Bill Hirschman 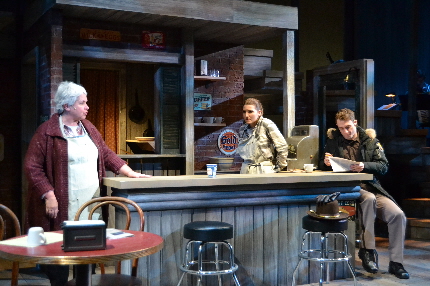 Be honest. When was the last time a musical truly touched the core of your humanity? Not entertained you, not made you think or plucked a heartstring a couple of times.

When did a production slip into your veins and ride your bloodstream for two hours? When did a musical speak so accurately of your own pain and longing that you knew you were not alone?

With the cult musical The Spitfire Grill, Palm Beach Dramaworks has gifted South Florida with one of the most heartfelt, moving evenings of musical theater in recent years.

Its compassion for the buried yearnings of everyday people, its respectful depiction of small town virtues and the depth beneath its residents’ simple exterior, its embrace of sentiment but not sentimentality, its clear-eyed portrayal of resilient hope and resulting rebirth — all these deliver a soul-stirring uplifting evening that ought to be sought out by lovers of theater.

While the raw material is laudable, it could easily become saccharine and cloying in the wrong hands. But Dramaworks has assembled a superb cast, a bedrock on-stage band and artistic designers — all under guided by masterful director Bruce Linser. This is some of the finest work we have seen from veterans whose excellence you have enjoyed for many years.

Spitfire the 2001 musical is based on, but veers significantly, from a darker 1996 film that won acclaim at film festivals but did not fare as well in general release.

Reduced to paper, its premise, plot and resolution sound like a predictable Hallmark Christmas Special. But the re-visioned work, with music and book by James Valcq and lyrics and book by Fred Alley, is a poignant tale that never feels paternalistic towards its characters nor Pollyanna about the realities of life’s quiet but profound tragedies to be conquered in this journey.

Percy (Ashley Rose) leaves prison after a five-year sentence gingerly seeking a new start. In the depth of a frigid winter, she heads to the rural “one-dog” town of Gilead, Wisconsin, lured by a random travelogue photo of a woodsy fall scene by its river. The young sheriff Joe (Blake Price) hooks her up as the sole employee at the only eating establishment in a burg which atrophied when a highway was rerouted and the local quarry closed.

Among the denizens are Hannah (Elizabeth Dimon), a flinty curmudgeon who owns the diner; her son Caleb (Johnbarry Green) who hates his dormant real estate job after being a successful foreman in the quarry; his wife Shelby (Amy Miller Brennan) a kind but submissive mouse; Effy (Patti Gardner) the town gossip and postmistress, and a mysterious mute stranger in the woods (David A. Hyland). Despite their sometimes prickly relationships, they form a close community that does not welcome strangers with open arms.

Everyone has a backstory in which the past has cauterized their life, leaving each with unspoken dreams and yearnings for, at best, a better life and at a minimum, a separate peace. Most characters express these in private introspective songs wrenched out of their shuttered hearts.

But there are group community numbers often tied to the play’s depiction of the seasons changing in a world where nature is an unheralded but integral part of the fabric.

It is no surprise that Percy and the townspeople’s interactions  change each other’s lives as those backstories emerge. As the light of exposure airs out their pain, each slowly grows and warms to more fully face and conquer their challenges.

The script is so tonally deft that the writers have ended the show not in the blossoming spring, but in the beauty of fall when winter is a few months away. Our protagonists have learned lessons they can take into the cold.

Linser has demonstrated his solid staging chops with  NM Theatre Company and with Dramaworks’ recent Woody Guthrie’s American Song. But given this Stradivarius of talent and resources in every department, Linser scores a career high in staging and in eliciting superior work, from the cast to the band to the designers. Finding, molding and maintaining this fragile, elusive groove is no small feat.

He has hired a dream cast of which almost everyone has a Carbonell or at least a nomination. Each melds acting and singing into a seamless whole with strong expressive vocals and affecting performances that do not feel like performances. All have considerable musical credits, but it’s easy to forget what glorious voices Dimon and Gardner have because they often appear in straight plays.

Start with Rose, an out-of-towner who embodies Percy’s evolution from a shut-down damaged creature to someone coming fully alive. In addition to a charisma that makes the audience root for her, Rose’s voice is a treasure. Her final emotional transformation in “Shine” makes the audience buy that she finally sees “embers of hope” despite a prior lifetime of pain.

Then there are the two portraits that are simply stunning. Dimon has the tough challenge of making Hannah’s own evolution believable, but the actress pulls it off step-by-step with complete credibility. Her beautifully-written second act contemplation song, “Way Back Home,” is a master class in acting-through-singing that is nearly guaranteed to moisten eyes.

Amy Miller Brennan. Dear God. She has always turned in standout performances in local musicals. But her work here just stops respiration. Her emergence of Shelby from a mouse to a fully-actualized person is a clichéd trope and yet the actress not only makes it plausible but a moving affirmation that change is possible. And her angelic voice has never sounded so lovely, whether exploring loss in “When Hope Goes” or comforting Percy in “Wild Bird” or merging in their upbeat duet “The Colors of Paradise.” Again, it’s not just expert technical skill or the purity of the sound, but her ability to use the music to express Shelby’s soul.

Price also shines in his ambivalent relationship with the town and in his growing attraction to Percy. Gardner keeps Effy drolly funny, while never being a caricature, and later assuring us of her supportive solidarity with her neighbors.

Green has demonstrated his range by playing King Arthur in the silly Spamalot at one end of the spectrum and the troubled husband in Next To Normal at the other. Here, he courageously inhabits the chauvinistic husband whose sense of self-worth has been crippled as articulated in “Digging Stone.”

The lilting score and supple lyrics are a rapturously melodic melding of folk-country-mountain-bluegrass music that can soar or bounce, but is always shot through with a plaintive tone reminiscent of Adam Guettel’s folk opera Floyd Collins. The composer has replaced a cello in the original orchestrations with an acoustic bass which now gives the music a stronger deeper foundation than can be heard on the original cast album. The score is executed with warmth and skill by Katie Lubben and brothers Michael, Tom and Joshua Lubben who doubles as the musical director guiding those vocal performances.

Paul Black’s multi-level evocation of the town is weathered planks and aging brick, dappled in an array of his lighting design that reflects the change of seasons, different times of day and the characters’ emotions. The penultimate scene of night turning to dawn is a thing of beauty. Brian O’Keefe has clothed everyone so naturalistically that his work never feels like costumes. And special mention to Brad Pawlak’s sound design: There are some countrified sound effects creating an environment surrounded by nature, but his aural achievement is the textbook perfect clarity of the lyrics and the balance with the band.

The show played five weeks in New York in a limited engagement at off-Broadway’s Playwrights Horizon in 2001, but never on Broadway where it would have been crushed under chandeliers, helicopters and warthogs. Florida Stage gave it a second mounting the following year.  Since then it reportedly has had 700 productions around the world in professional regional, children and community theaters.

Dramaworks has produced summer musicals, notably a reimagined 1776 and a fine Sweeney Todd. But Spitfire marks the first time it has included a fully-funded fully-imagined plot-centric book musical in their regular season. If this is any indication, we can hardly wait for The Light in The Piazza next season.

The Spitfire Grill  runs through Feb. 24 at Palm Beach Dramaworks, 201 Clematis St., West Palm Beach. Show times are 7:30 p.m. Wednesday, Thursday and some Sundays; 8 p.m. Friday and Saturday; and 2 p.m. Wednesday, Saturday, Sunday. Running time approximately 2 hours plus a 15-minute intermission. Individual tickets are $75. Student tickets are available for $15, and Pay Your Age tickets are available for those 18-40. Tickets for educators are half price with proper ID (other restrictions apply). Call (561) 514-4042, or visit palmbeachdramaworks.org.