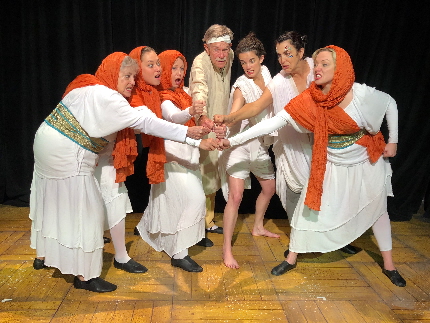 At Thinking Cap Theatre’s Dance Nation, eight pre-teen dancers and their teacher are prepping to take it all at a national competition. The Vanguard Sanctuary for the Arts in Fort Lauderdale is subbing for Liverpool (Ohio) Dance Academy. We’re invited into the dance academy studio with floor to ceiling mirrors and a stencil, high above the stage right wall, which states in black letters: “Be The Change You Want To See,” attributed to Mahatma Gandhi.

If this all sounds innocent to you, hold on to your dance hat.

The adolescents are played by adults, inhabited by seven women and one man, who range in age from their 20s to their 70s, but don’t let that scare your inner child away. Give Clare Barron’s play about 10 minutes and settle in, and you’ll be swept back into your own world of pubescent concerns. While there are complex questions throughout, here are the two big ones Dance Nation ponders: “What will I be when I grow up, and how do I navigate the complex world I inhabit now?”

It’s a technique that takes getting used to since Barron never acknowledges  that the dancers in her play are being portrayed by grown up actors. And it’s no easy feat but director Nicole Stodard has cast an ensemble that works together as tightly as junior (and, well, senior) Rockettes.

Kevin Black provides the over-the-top choreography that adds to the satire of it all. You know you’re in for something for which there is no comparison when the lights come up in the first act, the adult actors are dressed in sailor’s costumes and channeling Shirley Temple as a tacky track of “Anchors Aweigh” plays.

Dance Nation is a memory play, yet oddly in reverse – each “child” gets her/his chance to move ahead in time as an adult to look back. Maeve (Carol Sussman) says she used to feel as if she could fly when she was young, but as she grew older, she forgot. Connie (Bree-Anna Obst) battled with depression, and, recalling growing up with friend, Ashlee (Beverley Blanchette), realizes that she never understood the signs that her friend exhibited – since she was depressed herself at that age. The adult Amina (Jeanine Gangloff Levy) rode the wave to stardom –  she remembers that she always knew how to navigate that ambitious wave, and Luke (Jim Gibbons), recalls enjoying the glow and the feeling of riding in the car at night with his mother.

These flashes of adulthood are poignant, and, the actors are so subtle in their moving back and forth, and the direction so sublime, that it is never jarring, yet wholly effective.

Effective, and most purposefully jarring, are the breadcrumb placements that pop up now and again, designed to challenge our own frightened adolescent. These subjects were no no’s to discuss then, but became curiosities left for safe spaces. Barron forces us to confront them right here and now if we didn’t then: discussions of masturbation and, in one scene, practicing of that personal act; conversations about “to circumcise or not to circumcise” and who is and who isn’t?; and frequent use of the p-word and the c-word. (We’re not afraid, however, to use the words here; it just doesn’t seem appropriate for print).

The dancers come in all shapes and sizes – you’re not going to see bodies of the corps de ballet. The actors are purposely not meant to be dancers who act, but actors who dance, and that is exactly on point, too. Casting choices and most likely Barron’s instruction make a statement – who hasn’t been exposed to body shaming at one time or another? Here, everyone is accepted. How refreshing.

The adult actors take on their kid characters with fearlessness. Elena Maria Garcia’s Zuzu is always second best, intimidated by her helicopter mom (Elizabeth Price is tasked with playing all the dancers’ moms with different personalities as intentional caricatures). Garcia creates Zuzu as a bit of a misfit, and the actress’s natural comic ability propels the character.

Gangloff Levy balances uncomfortability with assuredness in the meant-to-be perfect Amina. Sussman portrays her Maeve as melancholy, lost in a dream world of a pack of wolves – she gets pictures sent each month from the Wolf Of The Month Club at $25, courtesy of her mother. Gibbon’s Luke is the tag along, neither fitting in or fitting out. Obst’s Connie is the horse-loving peacemaker, who gets her dream role.

Emma Magner’s Sofia never appears insecure, except for when her mother is waiting outside the bathroom door as Mom instructs her how to insert a tampon. Yet, Sofia proves she’s ready for anything. She creates her own war paint (you have to see this to believe it) to get psyched for competition. Jordan Patriarca’s Vanessa gets little stage time after a nasty injury (more satire as the gash looks like a cheap prosthetic from a joke shop, but even in its comedy elicited a collective “eww” from the audience), but Vanessa’s presence gets laughs as Patriarca arrives to help change scenery in a boot cast, and cheers the group on at competitions.

As Ashlee, Blanchette has the toughest monologue, with highs and lows, peaks and valleys, and the actress hits every nuanced moment. Here is where the child and the adult come together, as Blanchette plays it, as she tells the world what she “m-f-ing” thinks of it in no uncertain terms. It’s a mind-blowing couple of minutes, to say the least.

John Manzelli’s dance teacher Pat is pretentious from the get-go, giving his team a pep talk as if he’s coaching the New England Patriots to the Super Bowl. The cherry on the top of his career is if the team will get on a plane to fly all the way to Tampa Bay, Flo-ri-daaaa for nationals. He’s a bully, and abusive. When he smacks Amina on the butt, whoa, what was that? Yes, what was that? It’s left to our own interpretation.

Mostly everything in Dance Nation is intense – from how badly this group wants to be national champs, to each character’s ambition, to their dance teacher’s rabid hunger for his troupe to fill his own insecure ego.

If there is but one criticism, the ages of some of the child characters seem to play younger than what today’s 13 might be. There should be a necessary consistency across the ensemble, but it wobbles from character to character.

Were a prize given out today for Best Ensemble, the cast of Dance Nation would take home a trophy. And, in the most Ambitious Play category, applause for Thinking Cap Theatre for consistently taking on works that dare to be different. This is a regional premiere of Barron’s play, which had runs in New York and London. The only way to direct Dance Nation is to fearlessly take it on. Stodard does, her cast does, and so should the audience.

Dare your adult to take your inner child to see it.