Maltz Reopens With Comical Romp on Acting, I Hate Hamlet 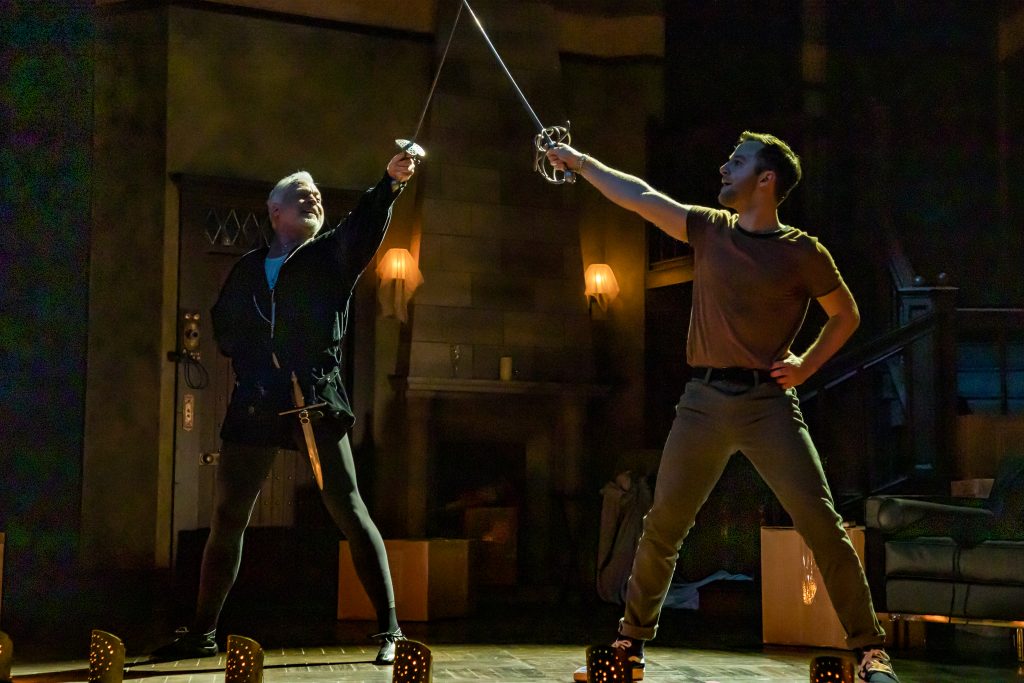 The art of acting – alternately glorious and mundane – is celebrated in the Maltz Jupiter Theatre’s return to live production after 700 days with Paul Rudnick’s delightfully comical I Hate Hamlet.

In this corner is John Barrymore, the skilled veteran of Shakespearean classics with a sonorous baritone in a cultured faux British and gliding with smooth sensuous movements. In the other corner is Andrew, the heart-throbby survivor of a recently cancelled TV medical series with all the thespian skills of… well, he’s the star of a cancelled medical TV series. Barrymore is giving Andrew advice on how to play the Dane, but, well, he’s dead.

Andrew, a standard issue actor whose potential has never been taxed, reluctantly gets pressured by his agent Felicia to appear as Hamlet at Shakespeare in the Park – an assignment he knows he is not equal to. He hopes that the accomplishment will persuade his wealthy girlfriend and wannabe actress, Deirdre, to finally sleep with him.

But he’s still undecided when his real estate broker ensconces him in the top floor of a Greenwich Village apartment that once belonged to Barrymore. When his entourage leaves following a botched bogus seance, the legendary actor’s ghost appears replete in Hamlet’s sable garb and weaponry to coach him in his art, craft and romantic aspirations. For his part, Barrymore must convince Andrew to do the role or he cannot return to heaven.

The collision of these two is farcical in itself, especially thanks to Bill Fennelly’s assured direction. But the real attraction is the witty script by playwright and screenwriter Rudnick (Jeffrey, In & Out) who weaves in a first folio full of gentle jibes and respectful admiration of the acting profession.

Barrymore asks the heartthrob who has just been offered $3 million to star in a lucrative TV pilot complete with merchandising opportunities: “Are you going to be an artist or a lunchbox?” When Andrew preps for the famed soliloquy with ludicrous Method Acting warm-ups, Barrymore suggests “Don’t confuse acting with asthma.”

The quick verbal byplay is a hoot. Deirdre is holding off having sex with Andrew before marriage. He asks her almost absent-mindedly: “Do you ever wonder if Hamlet slept with Ophelia?” Barrymore rejoins instantly, “Only in the Chicago company.”

So “to be or not to be in” this case has little to do with suicide and more to do with choosing between pursuing art at any cost or settling for fame and mediocrity.

To be fair, the first 15 minutes are pretty familiar and not terribly exciting 1960s-style stage comedy as we meet various strange characters and their quirks. But the second that Barrymore appears, it’s like someone turned the stage lights on full strength and the entire cast takes off with infectious energy.

As sharp as Rudnick’s dialogue can be, it requires and is elevated immeasurably by the performances from this energetic troupe who are always teetering on going over the top – but never quite. Everyone is unassailably solid – notably Patrick Halley as Gary, the manic acolyte to lowest common denominator entertainment.

But the show belongs to Tom Hewitt’s bravura turn as the bombastic Barrymore – and he earns whatever they’re paying him.

Hewitt, who has played leads in everything from Rocky Horror to Dracula the Musical to Beau Jest – inhabits the tall charismatic ego-obsessed matinee idol of his time. Most memorable is his voice, a deep thunderous baritone akin to that of Scar in The Lion King and titular head of Hadestown. But as the script requires, Hewitt’s past middle-age Barrymore – who no longer has a matinee idol’s silhouette — can preen proudly as he easily unreels memories about acting and romantic conquests. But they are balanced by an underlying sadness at his knowledge of his shortcomings, failings and downward spiral.

Alex Walton, last seen here in Brighton Beach Memoirs, is convincing as a very contemporary denizen at a professional and personal crossroad, who yearns for some undefinable success beyond being on the cover of every supermarket tabloid. His self-effacing concern seems reasonable since Andrew’s other major credit is talking to a puppet in a cereal commercial. It is intentionally the least showy role in the piece and because he spends much of the evening ambivalent about most things, Walton does well to keep the audience invested in his character.

The cast also benefits from Natalie Cordone as a Fran Drescher-sounding real estate broker who sets up the apartment deal and creates the séance;  Jeanne Bennett as the older German talent agent who toys with resuming a decades-old assignation with the ghost she knew in a more corporeal sense; and Liz Shivener as the delightfully kooky girlfriend who dreams of playing Ophelia. (Being Covid-minded, the Maltz has three understudies, Kim Cozort Kay, Alex Jorth and Taylor Machesko.)

Another major plus is the Gothic wood-paneled apartment equipped with footlights designed by Michael Schweikardt and lit by Amanda Zieve. If you have ever seen Edwin Booth’s digs at the top of The Players Club in Manhattan, you will recognize the ambience immediately.

A kudo is due sound designer Fitz Patton who has inserted more than a dozen passages of original music to amp up the mood. Fight director Lee Soroko oversaw a swordfight that covers every inch of the multi-leveled set.

The physical underpinning of the humor, notably Barrymore’s posing and sly hitting on the women who come visiting, is another of the show’s strength. Playing into the aforementioned difference between types of acting, Andrew practices a bow that is ludicrous; Barrymore’s extended carefully choreographed manipulative bow is a gloriously effusive and overdone masterpiece of encouraging audience articulated adulation. It is Theatre (spelled with a “re”) incarnate.

With the completion of its renovation/expansion of its theater slated now penciled in for a month from now, this production is situated in the well-equipped high school theater at The Benjamin School in Palm Beach Gardens – a donated facility most professional theaters would sell their mothers to call their own.

Like most theater companies, the Maltz has been laboring for two years to deal with the many challenges posed by the pandemic. But production-wise, its skeleton crew has been concentrating solely on finishing the current phase of its $36 million construction project.

Various problems caused the cancellation of its Jan. 11 season opener Jersey Boys at a sports arena. Then virus-related shortages in crippling material supply and aggravating work force shortfalls caused the cancellation of its Feb. 19 big-budget musical Sweet Charity.  The troupe hopes to open the musical Dirty Rotten Scoundrels in the venue March 22.

But with palpable relief, I Hate Hamlet opened smoothly with all the polish and professionalism the company is known for. Andrew Kato, producing artistic director/chief executive, was among those greeting patrons at the door and checking their proof of vaccination.

The 1991 Broadway production was infamous because Nicol Williamson, a notoriously mercurial alcoholic ironically playing Barrymore, became increasing uncontrollable and struck his costar on the back with the flat side of a sword during a dueling scene.