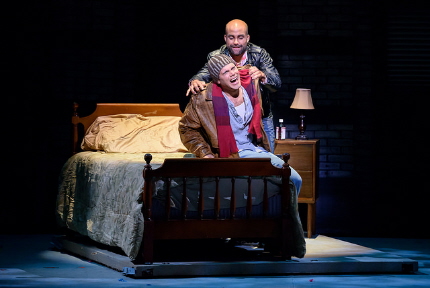 The true-life narrative in Before Night Falls is profoundly powerful and undeniably affecting: A gay Cuban poet, inspired by the beauty of the island but brutally oppressed by the government, escapes to America only to find that the loss of his homeland is as crippling as the loss of freedom had been, and, stricken with AIDS, commits suicide shortly after finishing his masterwork memoir in 1990.

The tragedy that imbued much of Reinaldo Arenas’ life and his memoir, published in 1993, provide the heart and soul of Jorge Martin’s 2009 operatic interpretation receiving only its second production thanks to Florida Grand Opera’s commitment to staging less familiar works along with classic warhorses.

Most audiences will be unable to resist a brace of talented performers most of whom act as well as they sing, an orchestra perfectly in tune with the score, a cinematic feel to the staging and the heartfelt emotional strength of the raw material.

Martin’s slightly revised opera itself is a mixed bag of supremely lovely underscoring rescuing a hodgepodge array of relentlessly declamatory vocal lines, and a libretto that pinballs between Arenas’ breathtaking poetic language and the dispiritingly blunt inelegant verbiage so clearly not Arenas’ work.

The story is told through selected episodes, so the narrative and character revelations stop often so that a truckload of exposition can be dropped in to fill in the blanks.

It opens in 1990 as bedridden Arenas (Elliot Madore) is in his New York City apartment dying of AIDs attended by his closest friend Lazaro (Michael Kuhn).  Arenas’ lifelong Muses, the Moon (Elizabeth Caballero) and the Sea (Melissa Fajardo), as well as Lazaro, encourage the memoir as a revenge against the many injustices he had suffered under Castro’s reign.

His mind returns to his childhood in the interior farmland of Cuba, the years and pain visibly falling off him as he enters the scene. His homosexuality evident through dalliances with Pepe (Javier Abreu) has already earned him the wrath of the community. But his long-abandoned mother comforts him (Caballero again in a beautifully rendered aria). His entire life is one attempt after another to escape something, often encouraged at his lowest moments by his Muses.

He escapes home in 1958 by joining a rebel army headed by Victor, (Castro look-alike Calvin Griffin). But the vicious violence and hypocrisy alienates Arenas and he retreats to Havana to further his poetry. After the Revolution, Arenas’ outspoken criticism on paper and in the streets wins him the mentorship of renowned dissent author Ovidio (Dinyar Vania). But after smuggling some of his works to France, Arenas is arrested and tortured by Victor as much for his dissident activities as his homosexuality. Betrayed by both Pepe and Ovidio, he “confesses” to his “crimes.”

He emigrates in the Mariel boatlift in 1980, even though dissidents are blocked. Instead, he must parade before visa officials and other waiting Cubans by adopting an exaggerated effeminate pose.

Once in Manhattan, he finally feels free, especially after meeting back up with Lazaro. But the feeling is undercut his sense of being an exile from a homeland he can never return to. He contracts the new “gay cancer” and, facing certain death, labors to write his memoir. With a failing lifeforce, he sings, “Cuba will be free. I already am.” When he dies just after finishing his masterwork, his soul returns to the sky and the sea, at rest at last.

Obviously, the story and its themes resonate strongly with a Miami audience with scenes such as the large ensemble seeking visas to escape, proclaiming, “We are ready to die to be free.” But the yearnings of a creative soul, a crowd proclaiming a desire for freedom and so many other colors are universal.

Musically, Martin’s orchestral underscoring is a masterfully gorgeous reflection of nature’s elements and the reigning emotional colors of a scene: swelling, soaring, alternately uplifting or darkly threatening, and with an appropriate but not overwhelming Latin flavor. It echoes not Verdi or Puccini, but film composers of the 1950s like Bernard Herrmann and Alex North with echoes of Stravinsky, Shostakovich, Copland and Bernstein.

But the melody line is a matter for debate. Well, it’s debatable whether there is a melody very often. Other than a lovely duets and quartets, most of the sung lines are persistently declamatory. This will not bother many opera aficionados, since it is a style common to many pieces. But audiences accustomed to music with discernable and accessible structure will tire being hammered with notes that follow no identifiable pattern, such as virtually everything sung by Victor.

This critic is not schooled enough to be certain, but it can be argued that those notes don’t even follow dramaturgical sense. For instance, at the very end of the first act, the background music appropriately rises as the Arenas sings in anguish at having crumbled at being betrayed by his mentor. But the see-saw vocal line ends with a low note rather than high one, just undercutting the moment.

Martin writes that he could not find a suitable librettist, so he wrote it himself with the aid of Dolores M. Koch, the book’s original translator. This is another weakness. The imagistic passages describing the island’s natural beauty are lyrical, transporting and presumably are taken from Arenas’ writing because the rest of the “lyrics” have no beauty, subtlety or craft. Oscar Hammerstein II, writing for a different art form, created simple even colloquial lyrics that were heartfelt but not ham-handed. When such blunt prosaic lyrics are being sung in Italian, German, French or Russian, the audience is enraptured by the music and doesn’t realize that the language lacks the same grace and insight. But in English, it is hard to ignore such clichéd lines as “We did not know what freedom was until they took it” or “Life without freedom is no life at all.”

Another strange aspect is how his Muses and his colleagues urge Arenas to remain hopeful as a major virtue, as if this was a major exhortation to the audience as well as Arenas. But in fact, at least in Arenas’ life, there is no hope.

Martin was enthralled by Arenas’ memoir, considered one of the best books of 1993, and obtained the rights for the opera in 1995. In 2000, director Julian Schnabel filmed an acclaimed version with Javier Bardem and Johnny Depp. Martin reportedly offered the work to FGO but was turned down by a different administration. In 2010, the Fort Worth Opera gave the piece its premiere. But FGO’s new General Director Susan Danis was committed to diversifying the company’s tradition-bound fare and was acquainted with Martin.

Madore is only 29 years old, but the Canadian baritone with smoldering boy band looks has a full soulful sound that brims with emotion and will be heard for decades to come after this FGO debut. Vocally and visibly, he depicts the anguish but also the brooding anger that characterized this perpetual outsider. His face and voice can reflect the transcendent feeling of freedom to the horror at betrayal.

Everyone else in the cast does a fine job under the direction of David Gately and the baton of FGO newbie Christopher Allen, especially Caballero who is a Mariel emigre herself, but special mention to Kuhn’s sweet tenor most often found in 19th Century classics but equally plausible as a 1990s resident of Manhattan.

Gately’s staging is solid, especially when he freezes the company in a tableau such as a New Year’s Eve party in Manhattan.  Arenas’ homosexuality is established in two ballets by Yanis Pikieris consisting of handsome young men in swimwear gracefully cavorting on beaches.

Allen, making his bow at FGO, smoothly leads the note perfect orchestra, which rewards him with a swelling, sweeping, performance that reflect the entire spectrum of emotional colors from creative sensitivity to disillusioned ire. 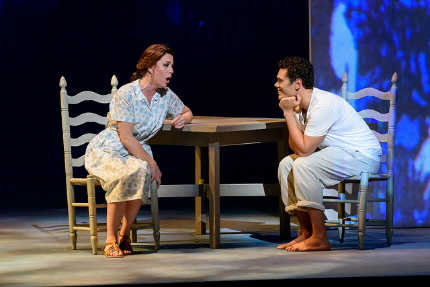