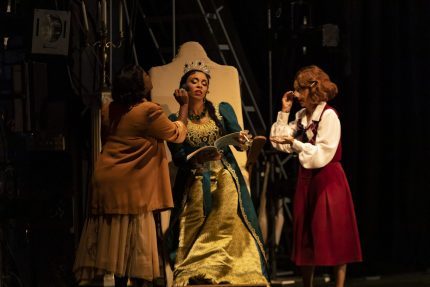 It’s unlikely that Handel imagined his Baroque opera Agrippina, rooted in the Roman transfer of power from Claudius to Nero, quite like this.

This unique Florida Grand Opera season closer bounces from some vision of Ancient Rome in Act I, then transfers in Act II to Regency England, but it’s actually being performed by a predominantly Black cast as they are being filmed in the 1930s by one of the pioneering Black film studios, notable because the director, script girl and plentiful stagehands are constantly moving their lights and camera around the action.

Sometimes the scenes are played for us as the actors are reading from their scripts in rehearsal; sometimes the director tries to tone down the way over-the-top histrionics of some the hammier singers.

And, by the way, in between some breathtaking deliveries of the famed emotional arias, director Jeffrey Marc Buchman’s edition of this runaway hit of George Frideric Handel’s early career is downright comical.

In the pre-show educational speech, the intense and complex political machinations drenched in sex, greed, ambition, betrayals and an ancient form of fake news was nicknamed “Game of Thrones except it’s in Rome.”

Certainly, conductor Jeri Lynne Johnson leads a superlative orchestra of only a dozen or so instruments in the tiny pit, plus the trio of a harpsichord, cello and long-necked guitar called a Theorbo, which are the only underpinnings for many of the arias.

And the singers are unassailably strong, first among equals being soprano Christine Lyons as the title scheming duplicitous soulmate, but who stops the show with her extended fierce aria “Pensieri, voi mi tormentate.”

Employing her sensual eyes and wicked mouth, Agrippina is trying to get her reigning lover Claudio (bass-baritone Neil Nelson) to appoint her son Nerone (tenor Kenneth Tarver) to the throne when it is being sought at the same time by courtiers Narciso (mezzo Stephanie Doche playing a man) and Pallante (Christopher Humbert Jr.). In the mix is flirtatious Poppea (soprano Flora Hawk), who is having affairs with almost everybody. If the names sound vaguely familiar, their character were prominent with their Latin names in the PBS TV series I, Claudius.

Johnson seamlessly weaves their disparate range of voices and her musicians in the larger group numbers to a point the maestro Handel would be pleased.

Also worthy a separate mention is Brennan Hall as another throne seeker, Ottone, who magically channels his counter-tenor into a falsetto that lasts throughout the evening.

But this production belongs to Buchman who fills the evening with comic touches such as having Pallante and Narciso trying outdo each other bowing deeper and deeper to Claudio until they are practically on the floor – all while someone else is singing.

Throughout, the film crew is interacting with the actors, such as when Pallante’s over the top facial and body movements are being toned down by the director. When the orchestra is playing but there are no words, he has the cast checking their makeup, conferring with the silent director and chatting with the stage crew.

Buchman and presumably Johnson significantly cut down the raw material, sometimes talking out the second repetition of the first part of the three-part aria, and compressed the three acts into two.

Despite the comedy, Buchman insisted that the company trained as singers, also act – usually with comic abandon, but occasionally with genuine emotion. Act I ends with Ottone’s lengthy lament for the camera “”Voi che udite il mio lament.”  But he keeps singing as the movie company breaks for the night, and as he takes off his fake sideburns, the “actor” is still overcome with the sadness of his character and finishes the number mournfully looking into his dressing room mirror.

One reason for the movie-filming conceit is due to FGO’s attempt to bring opera into the community. The work is being produced inside the 1924 Scottish Rite Temple in Miami – upgraded to mouth-dropping ornateness after Hurricane Andrew. When Buchman scouted the venue, he noticed an array of full-stage backdrops once used at the site and thought of them as movie cycloramas. A note on the venue, the acoustics were as clear and pristine as a venue built today let alone a century ago.

You can argue that Handel wasn’t trying to write the comic The Barber of Seville (that’s next season), but he’d probably have enjoyed himself.

Note: Valet parking is free, but several hundred people trying to get their cars from a parking lot with one exit is a challenge worthy of another opera. But Broward residents can take a free shuttle to the site from the Tri-Rail parking lot at Broward Boulevard.