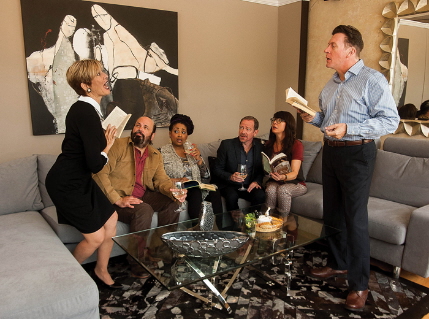 Professionalism is the only explanation why this much talent—the cream of South Florida theater from the director to the cast to the creative team — invested itself so deeply into the flawed frippery of The Book Club Play at Actors’ Playhouse.

Inarguably, there are several laugh lines in Karen Zacarias’ mild smile of a comedy that has been bouncing around regional theaters for a few years. But what makes this mediocre script bearable is the hard work of the six actors under David Arisco’s encyclopedic knowledge of comedy staging.

Seriously, something happens at Actors’ Playhouse as the temperatures rise each spring and it opts for lighter fare. Occasionally, it chooses an entertaining rib-tickler or an innocuous musical satire of contemporary life. Other times it chooses something so insubstantial that the audience shakes its collective head in wonder. This one falls below the median of the two extremes.

This critic loves stupid undemanding comedy. (I argue that Animal House and The Blues Brothers are right up there with Citizen Kane in the cinematic pantheon.) But this is a pretty tame and predictable offering of a brand more often seen in third-tier amateur theaters. Nothing coming from a corps this solid could ever be awful or a waste of time, but this is an uninspiring evening despite those folks.

You can guess much of the arc from the premise: A disparate group of upper-middle class friends and colleagues gather every month in the stylish living room of one couple to discuss a book they have read. The slight curve ball is that a Danish documentary filmmaker has installed a camera that cannot be turned off to record the discussions for a future Cannes entry.

It’s a harmonious group: Ana, neé Ann, (Barbara Sloan) is the aggressively chirpy leader, an overachieving highly-organized and organizing type who is a “Connections” columnist for The Herald. Her husband, Rob (Stephen G. Anthony) is an affable easy-going guy in pharmaceutical sales who just likes the food and rarely reads the assigned book. Will (Michael McKeever) is Rob’s former college roommate and current bosom buddy of Ana, a likable but exacting museum curator. Lily (Lela Elam) is Ana’s new colleague on the newspaper, an ebullient Pollyanna-ish African-American woman who reads her books on a tablet or smartphone. Jen (Niki Fridh) is a lovable but lonely paralegal whose career was short-circuited by a sex scandal. Late in the first act, thrown into the mix is Alex (Paul Tei), a scruffy anarchic professor of comparative literature who Jen has met and who shakes things up a bit. All are two-and-a-quarter dimensional types drafted in shorthand.

These unshakeable buds cannot possibly be rent asundered, even when they disagree on their opinions of a book, right? Can there be a shred of doubt what happens? One sign of the evolving meltdown is the group goes from reading Moby Dick to The Age of Innocence to Twilight to The Da Vinci Code to The Return of Tarzan. The best line of the night – and there are several – comes from Alex assessing the wreckage with “Book club is like Lord of the Flies with wine and dip.”

Of course, Zacarias is required by the 21st Century Comedy Rulebook to inject an uplifting Aesop Fables moral somewhere. So everybody “learns something about themselves” thanks to what they read. Plus, there’s a discussion of the worth of literature and what qualifies as literature in this world of pop culture. But that is one of the play’s weaknesses – these arguably strongest sections of the show feel artificially inseminated in what has mostly been a pretty broad comedy of character.

The result is the feeling of a messy play that isn’t confident of what it wants to be and can’t navigate the gear shifts. For instance, the incredulous last scene is the theatrical equivalent of someone indiscriminately throwing the detritus of a dinner party into the trash compactor. This is unexpected because Zacarias is an accomplished playwright (Legacy of Light and Mariela in the Desert) who even rewrote her 2008 script in 2013.

On the credit side, watch these six actors and Arisco bring their considerable craft to bear. While you can see them pushing this button and that, thank goodness that they do. No one is coasting and these folks can get laughs out of the Periodic Table of Elements. A special shout-out to Anthony who brings life and credibility to the thankless cartoon role of the everyday hubby who’d likely rather be in his mancave.

The Book Club Play plays through June 7 at the Actors’ Playhouse at the Miracle Theatre, 280 Miracle Mile, Coral Gables. Performances 8 p.m. Wednesday-Saturday, 3 p.m. Sunday and 2 p.m. May 20. Running time 2 hours with one intermission. Tickets for weeknights and matinees are $45, and on Friday and Saturday evenings $53. The theater offers $15 student rush tickets 15 minutes prior to curtain with identification.  Show your ticket stub to get a 10 percent discount at Books & Books. Visit actorsplayhouse.org or call (305) 441-4181.