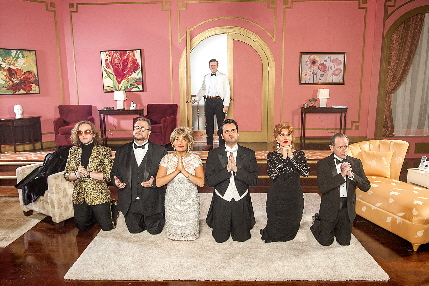 Last spring, we saw the Broadway run of It’s Only A Play, Terrence McNally’s satire/love letter to the theater and its sacré monstres. While it was dense with inside baseball written to delight theater nerds like us, we predicted it would not have a shelf life 30 miles outside of Times Square for just that reason.

GableStage’s Joseph Adler and a merry band of actors have produced a version that is funnier and has far more heart than the Broadway edition.

By the time we caught it late in the New York run, Nathan Lane was still doing his peerless best playing an actor who deserted theater for a television series. Thank goodness for him, because Matthew Broderick playing his best friend the playwright and Stockard Channing playing a washed up movie star retreating to the theater were sleepwalking through their crucial parts.

Instead, here, we have the wonderful Michael McKeever, as fine a light comic actor as we have, giving a performance far different than Lane; the winning Antonio Amadeo as the playwright, and the inestimable Lourelene Snedeker as the movie star. Add in a first-class supporting cast with fine-tuned comic timing, Adler’s gentle but indefatigable pacing, and McNally’s arch self-skewering humor to produce a thoroughly entertaining night out for people who love theater.

This behind-the-scenes portrait of an anxious opening night party is jammed with dishy digs at boldface names and jokes that are only funny if you have some knowledge of the Broadway scene. But Adler, McNally and Company still provide enough broad humor that the show will be funny even to people who don’t know the territory – or what musical that phrase references.

Beneath the considerable humor, this overhauled, updated edition of McNally’s 1982 comedy remains a paean to the glorious narcissistic and divine misfits who populate theater.

The set up: An enthusiastic but slightly dim first-time Broadway producer with a lot of money, Julia Budder (Amy McKenna), is hosting the opening night party for The Golden Egg at her tony Manhattan townhouse. Downstairs, initially out of sight are the theater-worshipping playwright Peter Austin (Amadeo); Frank Finger, the wigged out glam British director (Wesley Slade); Virginia Noyes, (Snedeker) the lead actress addicted to a pharmacy-worth of Schedule 1 drugs in her purse and on parole for a traffic accident that killed “only” one parent; and Ira Drew (Christopher Chisholm), the nastiest critic in town who has the night off but also a hidden agenda.

Upstairs in a luxurious bedroom, we meet Jimmy Wicker (McKeever), a stage actor who turned down a part in The Golden Egg to continue making a lucrative living in a sitcom, causing estrangement with his buddy Peter. Making regular visits to the bedroom is Gus (Joe Ferrarelli), a fresh-off-the-bus wannabe hired to store guests’ coats on the hostess’ bed.

Eventually, everyone ends up in the bedroom after each makes a grand entrance. Fueled by alcohol, pills, angst and raging fragile egos in overdrive, these overheated stereotypes spin at a tornadic 8000 rpm, throwing off the kind of delightful sniping we expect.

Wicker is talking to his agent on the phone who asks about the play. Wicker says into the phone “What’s your traditional Thanksgiving dinner?” He waits for her answers and then responds drily “Well, this one was a 300-pound Butterball.”

A long time denizen of the concrete canyons, McNally mercilessly skewers the vanities and neuroses of playwrights, actors, producers, directors, hopefuls, and audiences. Above all, he drives a razor-sharp rapier through the place where the heart should be in those ultimate villains: venal, insensitive, taste-deprived theater critics.

The words have not changed, but this production is far more effective in the stretches when characters, especially Peter, hold forth in speeches of genuine affection for the importance of theater. This may well be because Amadeo delivered them as if his Peter was speaking from his heart. Broderick always exuded that smirky Ferris Bueller half-smile that assured you he wasn’t taking the speech or the play seriously.

McNally unreels literally hundreds of inside jokes, often referencing an unending parade of Page Six names. Some are obvious to any theatergoer such as Gus dropping on the bed the coats of celebs and cast members: a long, long coat belongs to Tommy Tune, a plastic bubble outfit is Lady Gaga’s, and raiments are piled up for guests visiting from seemingly every show from Rock of Ages to The Lion King.

Others are only for insiders such as a passing reference to “Moose Murders,” the legendarily worst Broadway play of all time.

The script has been updated by McNally or Adler to touch on Hamilton and a dozen other current memes. It also feels as if McNally has trimmed down what initially seemed to be running a half-hour too long. Truthfully, the play still unravels in the last 20 minutes or so into a meandering unfocused finale. But by that time, the audience is won over. 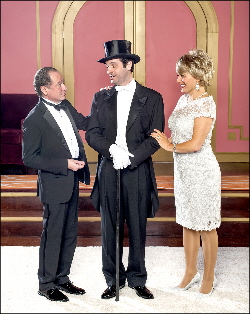 The dapper, always likable McKeever is so comfortable with snappy repartee that he makes it looks easy when in fact it’s carefully-crafted skill with Adler’s direction. While he’s terribly funny, he admirably restrains himself from commandeering every laugh line — something Lane could not resist. The positive upshot is that the Broadway production was about Lane, but McKeever and Adler allow this to be an ensemble show.

Snedeker has one of loveliest singing voices in the region (e.g. her Mother Abbess in The Wick’s Sound of Music), but veterans of local theater-going know she has considerable experience exhibiting a wicked comic bent with wide rolling eyes and a smoky voice whose acidic barbs barely conceal a battered vulnerable ego.

Amadeo does so much straight drama – his amazing turn in Daniel’s Husband for Island City Stage and his recent tour de force in Constellations at GableStage – that it’s easy to forget what a gifted comedian he can be. The scene in which he and McKeever furiously reproach each other for perceived betrayals is priceless. But it’s his speeches about the glory of theater that give the play its sentiment.

Sadly, McKenna leaves South Florida after this show for Seattle and audiences will be the poorer for it. Skilled in dramas like her finely nuanced lover in Zoetic Stage’s Betrayal and daffy comedy like her oversexed golf club member in Actors’ Playhouse’s Fox on the Fairway, she creates an adorable if not overly sharp doyenne whose skills as producer are not quite the level of her love for the art. She is perfect looking absently into the distance while mangling theater truisms with precise timing such as “If I can make it here, I can make it…there” or referencing the British playwright “Harold Painter.” 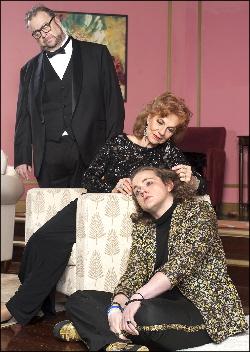 Slade, who has paid dues in several anonymous ensemble parts at The Wick Theatre, explodes as the batty over-the-top avant-garde British director who yearns for someone to call him on his pretentious work. Ferrarelli is a lovably earnest novice who still loves the mythology of New York theater and who delivers the most awful impromptu audition on record of “Defying Gravity.”

Chisholm’s bio in the program lists scores of professional credits across the country in various venues and genres, but we can’t remember seeing him here, even though he’s a graduate of the University of Miami. Still, his self-satisfied critic, whose own outsized ego makes him think of himself as an insider, is a solid hoot, made all the more memorable because of his plummy faux cultured accent.

Ellis Tillman created lovely gowns for Virginia and Julia, and an over-the-top Elton John outfit for Frank Finger. The play is set in a stylish bedroom designed in Pepto pink and gold trim by Lyle Baskin.

We doubted this was going to play in Peoria, let alone Coral Gables, but we are delighted to report we were badly mistaken.