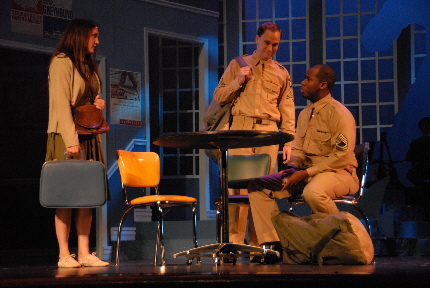 At this point in Slow Burn Theatre’s ascension within the South Florida musical theater scene, probably any show that co-founder Patrick Fitzwater would direct for the company would win over its audience. It certainly is Fitzwater’s enthusiasm for its latest, Violet, and the fervor he instills in his cast that can convince audiences that this quirky seesaw of a musical is worthwhile.

The 1997 score is by Tony Award-winning composer Jeanine Tesori (who won the 2015 Tony for Fun Home) before she became the first female composer to have two original musicals running concurrently on Broadway — Thoroughly Modern Millie, which ran for 903 performances, and Caroline, or Change.

The book and lyrics are by Brian Crawley and based on Doris Betts’ short story, The Ugliest Pilgrim. Published in 1973, the plot concern a girl who sets out a quest to fix her disfigured face. When we meet Violet, she is on a bus traveling from North Carolina to Oklahoma in hopes a televangelist healer can make the gash on her face disappear.

It’s 1964 – U.S. involvement in Vietnam is raging, the Civil Rights Act has just been passed, and The Beatles hold the No. 1 and No. 2 spots on the Billboard charts. On the road, Violet meets two soldiers, a ladies man named Monty and shy sergeant Flick. All three of them, along with others they interact with along the way, share a longing for something that they believe will make them whole in one way or another – whether it is on the inside, on the outside, or both. But mostly the story’s throughline deals with judgement based on outer appearances.

Despite her horrific appearance — caused by an accidentally airborne ax when she was 13 – and after their initial shock, most folks who get to know her can’t help but be charmed by Violet. For Slow Burn’s production, Lindsey Corey steps into Violet’s shoes and they are a perfect fit. Corey captures Violet’s wide-eyed naiveté believing beyond some doubts that there’s hope for her tragic condition. The actress also has the vocal skill to pull off some of the tricky acrobatics that the musical score throws her way.

There’s an inherent problem with Violet. It’s that scar, which the audience never sees. The device, concocted by the playwright, is to keep the actress’s face intact – no latex, no prosthetics, no scar. Fitzwater announced at the beginning of the Slow Burn show, “we want you to decide how deep the scar is.” There has to be more than just asking the audience to suspend their disbelief as the cuter than cute Corey sings “Look at me/No one will look at me/No one will dare to spend the time it takes to/Look at me/To really look at me.”

There’s a consistent void somewhere deep down in this musical’s emotional investment. I wanted to root for Violet to get what she wants: Gene Tierney eyes, Ava Gardner’s eyebrows, and anybody’s cheekbones, but while my mind yearned for her to get her wish, my heartstrings weren’t plucked.

Yet, there is some super talent on stage at the Amaturo Theater. In addition to Corey, there’s 10-year old Lucia Fernandez de los Muros who plays the Young Violet. She’s natural to the core and holds her own in many a duet with the ultra-talented Shane Tanner, who plays Father, especially in a delightfully complicated poker scene. 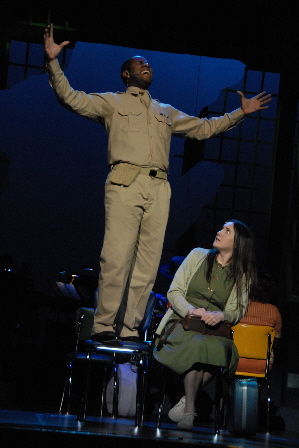 Andre Russell as the soldier Flick is quite a find for Slow Burn. The musical director of City Theatre’s Short Cuts and assistant musical director at the Coral Springs Center for the Arts, Russell has it all. He stirs up a deep pot of emotion in “Let It Sing,” a gospel anthem which begins with a simple marching cadence then gathers steam as it goes along. Russell builds the song to a triumphant crescendo.
Flick’s counterpart, Monty, played by Alex Jorth is an appropriately manipulative ladies man, then tender when the role calls for him to find that emotion. He’s the perfect yin to Flick’s yang.

Rusty Allison’s showman preacher and gospel soloist Kendra Williams have a field day with the roof-raiser “Raise Me Up,” creating the old-church southern revival.

Fellow passengers on the bus journey, while each has a role to play to further the story, fade a bit into the background. Gail Byer’s characters of Old Lady/Hotel Hooker are seeking their own salvations, yet, in this production seem inconsequential. Noah Levine’s snotty waiter, Christina Alexander’s music hall singer, and Rick Pena’s false suitor Virgil, could be more characterizations than clichés.

While the story has its flaws, the music is memorable. It is basically sung through with more than twenty numbers borrowing musical genres from gospel and blues to rock and country. Talented music director Manny Schvartzman knows how to keep this score close to its roots.

Violet is a complicated show on many levels. This production, at times, seems inhibited by Violet’s many demands. Applause, as always, however, for Fitzwater’s direction and choreography and Slow Burn’s willingness to challenge itself and audiences by taking on works such as these.

Slow Burn Theatre Company presents Violet at the Amaturo Theater, Broward Center For The Performing Arts, 201 SW 5th Ave., Fort Lauderdale, through Feb. 7. Performances are Thursday through Saturday at 7:30 p.m., and Sunday at 2 p.m. Running time 75 minutes with no intermission. Tickets are $45. Call (954) 462-0222 for tickets, at www.browardcenter.org or #Ticketmaster.com; in person at Ticketmaster outlets or the Broward Center’s Auto Nation Box Office. Info at www.slowburntheatre.org