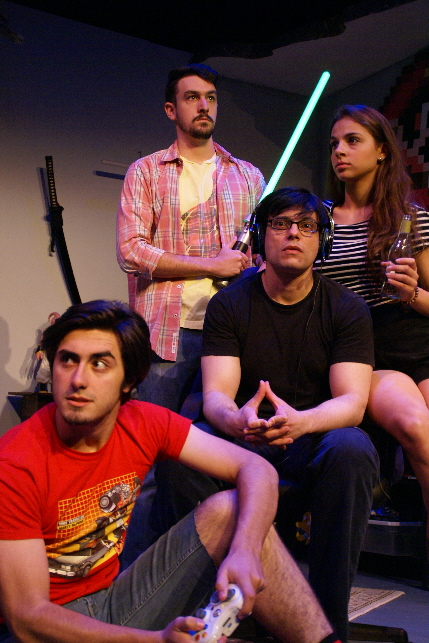 Joel Alexander, Danny Leonard, Daniel Gil and Rebecca Jimenez are Gen Y’ers on the cusp of trouble in Deborah Zoe Laufer’s Leveling Up at New Theatre / Photos by Eileen Suarez

Time and events move today with the speed of thought. When we read the script for Deborah Zoe Laufer’s play Leveling Up about two years ago, the premise seemed like a logical if unlikely extension of reality, satirically exaggerated to make a point and for dramatically enhanced theatricality.

Now we’re not so sure. Perhaps the old joke is not so far-fetched that today’s cyber-obsessed gamers with their decade of heightened reflexes would make terrific warriors ala Ender’s Game and The Last Starfighter.

But Laufer’s play getting an intriguing production by New Theatre is about far more than a 20-something gaming magus in Las Vegas hired to remotely operate drones that eliminate real targets in the Middle East.

The often wry and witty play asks more macro questions. Has technology deadened a generation’s sense of societal kinship? Has it eroded their humanity until the idea of morals and values is more alien than the targets they blast away at? Have they walled off all manner of reality including true human interaction?

But the New Theatre production underscores Laufer’s bottom line: You can’t cheat reality forever. Even with a generation that has surrounded itself with a consequences-free virtual world with minimal emotional risk and therefore a vacuum of principles, eventually the bill comes due. The actual world forces its way into the insulated artificial world of these four Gen Y’ers striving to delay direct immersion in “the real world.”

Artistic Director Ricky J. Martinez and his cast create a convincing quartet of young adults barely conscious of losing four hours at a time living inside virtual environments – and frankly not being all that concerned when it’s pointed out to them.

But they are not the cartoonish zombies that their parents probably think they are. The actors create people deeply entrenched in decades of shared pop culture and whose interests certainly encompass sex. Their common denominator – even the most goal-oriented – is a tragically vague rootlessness in a society whose value system seems to them spurious and pointless.

The entire play occurs in a windowless basement apartment shared by Ian (Daniel Gil), a preternatural genius at gaming; Chuck (Joel Alexander), a genial sidekick working as a casino dealer while he figures out what to do with his life, and Zander (Danny Leonard), a charming ne’er-do-well who can’t focus long enough to keep a job or even a class schedule. His lovely girlfriend, Jeannie (Rebecca Jimenez) is the most grounded. She is taking college classes with an amorphous idea of some socially productive career, but she nearly lives here and spends her share of time absorbed in the video games. They all seek a life with a guaranteed “epic win” but are too afraid of risking anything that might result in “an epic fail.”

Ian is the only one making serious money, but he does it by selling his gaming ability to customers leveling up, meaning he logs on as the customer and then plays as their online character to build up their stockpile of advanced weaponry, magical talents and renewable lives. It is unvarnished cheating, taken to an unprecedented but profitable level.

Each is cheating in various ways. For instance, Zander steals Ian’s most valuable leveled up creation and sells it for a foolishly low amount of money. Jeannie and Chuck playfully guide their avatars to have sex online (one of the show’s funniest scenes thanks to Martinez’s direction) and suddenly wonder if they have been unfaithful.

Circumstances escalate as Ian spirals deeper into the new job with the National Security Agency, training for days without sleep. His friends question the morality of what he is doing, but they are more concerned that his entire life is being submerged online. Resentful at being called out so correctly, he brags that his “friends” in the gaming world are smarter, more capable and unquestioning while working together toward common goals of self-advancement. The fact that these people are likely idealized constructed personas doesn’t bother him a whit. But eventually, reality bites – and hard.

Laufer and Martinez, both of whom have at least a decade or two on these characters, have constructed a convincing compassionate portrait of these protagonists without the condescension of an older generation. The script is shot through with clever banter worthy of very bright and articulate denizens with brain synapses clicking as quickly as their trigger fingers.

Admittedly, the script and its metaphors sometimes teeter toward the unsubtle, melodramatic, even predictable, such as Ian’s hollow Nuremburg-type rationalizations. But the cast and Martinez always clothe it in a plausible naturalism of angst, fear, affection and loyalty, especially since these are young people inexperienced with real life.

Besides, Laufer is an experienced and skilled dramatist who revels in ideas. Laufer’s look at religion, End Days, got its world premiere at Florida Stage in 2007 and her The Last Schwartz was produced last season at the late Parade Productions in Boca Raton.

The basement set by Martinez and Nicole Quintana is brilliantly equipped to resemble exactly what 20-somethings would buy with their first paychecks: computer equipment, Star Wars light sabers, the Millennium Falcon, Guitar Hero axes and oversized action figures. Their large screen television where some games are played is invisible on the fourth wall, but that allows the audience to witness the laser concentration that these supposed slackers lavish on these games.

Anton Church’s actual videos, projected above the set on a large screen during scene changes, are deftly chosen to comment on what has just happened. After one argument among the friends, the online hero is seen wiping out everything around him and the video bears the legend, “Eliminate enemy players.” Further, the “real” infrared video of a drone strike that Ian is involved in is notably far different from the fantasies we have been watching.

By the way, show up early to the show because the four actors riff improvisationally as their characters for several minutes before Martinez’s curtain speech.

We know that New Theatre’s home at the South Miami-Dade Cultural Arts Center is a long ways off for other residents in the county and even farther for Broward theater lovers. But New Theatre’s work keeps getting stronger, often making it worth the drive.