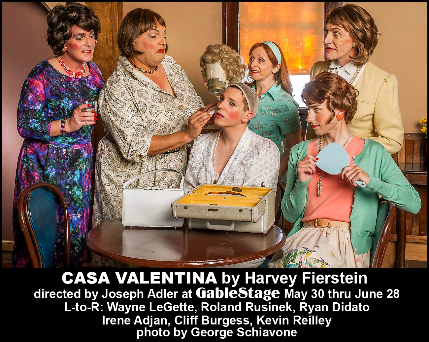 To a “straight” audience unfamiliar with transvestism, the most shocking moments in Casa Valentina about men gathering at a Catskills resort to dress in women’s clothes in 1962, the most telling moments occur when men wearing pearls and hosiery utter virulently homophobic sentiments.

That’s because one of several takeaways from Harvey Fierstein’s thought-provoking play is that sexuality is not homogenously black or white. What Fierstein depicts is not even a spectrum of grays between the black and white, but an infinitely varied stew of preferences, prejudices and other ingredients in varied measures.

While the guests – most friends for years — initially bask in a mutually supportive environment where their closeted inclinations can be indulged freely, those aforementioned differences under pressure will drive them apart and destroy the Eden they have built.

These subtleties as well as the generous humor and rending tragedy are all beautifully excavated in GableStage’s production thanks to a committed cast led by director Joseph Adler. No actor winks that they are just portraying a character or that they are living out their own dream on stage. The cast under Adler’s hand are credible every moment in their affectionate camaraderie. The characters are not horsing around in frocks and lipstick; their inner selves have been released. That goes a long way toward a mainstream audience accepting what are outwardly and inescapably males wearing wigs and high heels.

It’s a script and production that stay with you hours after the house lights return and on into the next morning. In retrospect, they keep revealing different facets like a rotating gem in a persisting light. The themes are not terribly complex or amorphous, but they set off chains of thought, such as what would these same characters be like in 2015, would they have other societal options, how would they feel about themselves? To underscore the point, the opening night audience, in fact, included one man dressed in women’s clothes and makeup.

The play centers on a group of Mad Men-era men who have gathered for years, some driving three hours north from Manhattan, for long weekends spent dressed and made up as women.

All of “the girls” stress that they are not homosexuals; they have wives, children and conventional lives. They are simply, very simply men who get a thrill dressing up in women’s clothing and makeup. Something in it fulfills or releases a feminine component of their nature, although they rarely put it in such blunt terms. But the never spoken truth is that at least one is definitely homosexual, one is likely bi-sexual and we’re guessing that others may or may not simply be in blind denial. For some, this is sexually stimulating; for others, it’s asexual.

Gloria has invited young first-timer Jonathon (Ryan Didato), who is the only one hiding his need from his wife. Valentina has invited Charlotte (Kevin Reilley), a rabid activist who publishes a magazine that publishes Valentina’s articles and photos of past gatherings. Late to the party is “The Judge” aka Amy (Peter Galman), a distinguished mainstream pillar of this upstate community.

Several characters apply makeup and wardrobe before us, but the transformation is no more marked as in Galman’s portrayal of Amy’s release from inside The Judge. Once he finishes, he exhales fully, and says with quiet relish, “At last, I can breathe. Amy, I missed you.”

The regulars help Jonathon uncover his inner Miranda and their jovial campaign to give her a makeover outwardly and inwardly reinforces the sense of community that these people have forged. The warm moments of mutual support and self-acceptance are in stark contrast to the self-loathing depicted in Mart Crowley’s The Boys in the Band.

But all is not well. Postal inspectors are investigating why illegal porn was mailed to an unknown party at the resort. George is nearly bankrupt and he wants a loan from Charlotte. Charlotte has arrived solely because she wants to bring her organization The Sorority into the light as a public non-profit advocacy group (remember this is 1962) and wants George’s group to sign on as officers whose identities will be revealed. That last sets off an understandable tumult. They may have come to terms with their desires, but they know darn well the public hasn’t. There will be surprises, betrayals, blackmail, manipulations, politics, alliances and ruptured relationships.

But what guarantees the ripping apart is the subverting idea that one or more might be gay or drag queens, a characterization that some rebel against almost viscerally. “We do not mix pronouns,” one man admonishes. The irony is they cannot see – or refuse to see – the analog with homosexuality, at least as an oppressed group, perhaps denying their deeper selves. Fierstein is not saying most transvestites are gay, but that there are many complicated mixtures of sexuality present at this weekend that cannot clumped together under a single label. It can be argued that the tragic divisive arc here is that perhaps these men who are striving to be true to who they think they are, in fact, are not facing who they are.

The playwright behind Torch Song Trilogy and La Cage aux Folles, with his gruff voice, burly frame and outgoing persona, is not immediately associated in pop culture with subtlety. But his script for Casa Valentina is an incisive endeavor that does not portray simplistic paradigms or offer easy answers. For instance, the protagonists’ unspoken question underlying most of the play is “So who are we hurting?” But, in the end, Fierstein tosses in proof (here in the form of the wonderful Patti Gardner) that even if these men are trying to be true to their inner selves, their double lives can wreak collateral damage on the innocent.

Particularly fascinating in Fierstein’s script is how each man sees himself differently. Bessie sees herself and Albert as two people in a kind of marital relationship and forming a perfect balanced whole as in the best marriages. Charlotte is so completely a woman that her “real” name is never mentioned. When George is George, he refers to Valentina in the third person.

While the cast members play the characters’ feminine side emerging in the welcoming environment, not one, not even Charlotte, is a lisping stereotype. The grim-faced Amy, stunned by a revelation, has the ravaged look and sound of Terence Stamp in Priscilla Queen of the Desert.

Similarly, the men discuss how their families cope differently with acceptance, denial, ignorance and various brands of separate peace. Adjan deserves an extra hand for investing plausibility in Rita’s acceptance of her husband’s duality. She tells an inquiring Bessie, “I married George. I love George. Valentina is like an in-law.” Yet, their relationship is not rock solid either. George is obviously more comfortable as Valentina. Valentina is more than just an alter ego or a hobby, but a need as demanding as Rita, which sorrows her more than he realizes.

Costumer Ellis Tillman has produced period-perfect garb for both sides of each character’s personality, giving each a cherished dress that expresses each’s social standing and taste.

The production is not perfect. Several cast members were still getting comfortable with their lines opening night. That’s a problem because Fierstein gives many of them faux Oscar Wilde bon mots or has them hold forth with socio-political pronouncements, both of which feel a bit forced at times. But that will likely smooth out in time. Adler has deftly molded the entire undertaking, especially these individualized performances. But where he usually succeeds when a couple of characters sit a table and talk a great deal, in this case the sight of six or seven people sitting in a straight line facing the audience and talking feels terribly static.

Still Adler, Fierstein and company take us not just into a world most of us are not familiar with, but into questions of recognizing and accepting who we are, questions anyone can identify with.

Casa Valentina runs through June 28 at GableStage, 1200 Anastasia Ave., Coral Gables, inside the Biltmore Hotel. Performances generally at 8 p.m. Thursday-Saturday, and 2 p.m. & 7 p.m. Sunday. Runs 2 hours including one intermission. Tickets are $40-$55 and students  $15. For tickets and more information, call 305-445-1119 or visit GableStage.org