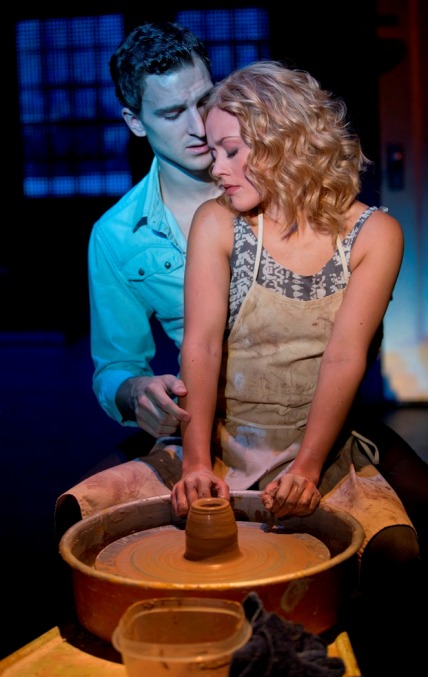 The iconic moment from Ghost The Musical / Photo by Joan Marcus

By Michelle F. Solomon
There are plenty of illusions in Ghost: The Musical – the newly-dead walk through doors, a ghostly subway train zips across the stage, but it isn’t a set piece, it’s a projection, and a Marlboro cigarette pack is the object of a lesson in how to use ghostly energy for Earthly necessity.

But perhaps the biggest illusion of Ghost: The Musical is that, at its face value, it’s an ordinary Broadway musical. Because of this notion, it doesn’t seem to get its proper due.

Now at the Broward Center for the Performing Arts as part of the Broadway Across America series, Ghost: The Musical has all the requisite elements of a Broadway musical – there’s a book (based on the 1990 Patrick Swayze, Demi Moore film, Ghost) about a couple, Sam (Steven Grant Douglas) and Molly (Katie Postotnik) who discover more about their relationship and about themselves after Sam is murdered on a New York street. There’s a decent musical score, choreography, and the must-have showstopping Broadway musical numbers.

Yet, what lies beneath this musical is what’s really captivating. For those looking to see a musical redo of the movie, there will be disappointment . The story is still there, but the producer, director, music, book and lyrics writers chose to use the story’s foundation to go for high energy, visual pizzazz wrapped up in a rock musical. Approaching the show this way without any preconceived idea of seeing the movie transferred to the stage will render a more satisfying experience. Don’t look for the sexy potter’s wheel scene — it’s a mere blip here.

Bruce Joel Rubin, adapted his Academy Award winning screenplay for the book to this musical, but takes this foundation as if looking at his story with fresh eyes for the stage. He also contributed some of the music lyrics, but the real power duo behind the score is Dave Stewart (of band Eurythmics fame with singing partner Annie Lennox) and Glenn Ballard (responsible for the megahit album” Jagged Little Pill” that put pop star Alanis Morissette and was involved in the writing of Michael Jackson’s “Thriller” and other King of Pop hits. He’s now collaborating on some original songs for the musical of the film Back to the Future which will open in London’s West End next year).

That’s the meat and potatoes part of Ghost: The Musical. Listen carefully and you’ll hear some of the signatures of the Ballard songwriting technique.  Molly’s  “With You,” one of the most memorable songs of the show, and beautifully sung in this touring production by Postotnik, has shades of Morissette’s “Little Pill” more acoustic style songs like “Forgiven” or “Right Through You.” Same thing of some of the more uptempo songs that have the Stewart stamp, “You Gotta Let Go,” one of “Ghost’s” most showstopping. Then there’s the pairing of the musicality of Stewart and Ballard on the complex and beautiful “Suspend My Disbelief/I Had a Life.”

Stewart and Ballard give in to the Broadway bombast for the laugh-out-loud antics of “Are You a Believer,” the introduction of psychic Oda Mae Brown (Carla A. Stewart). The number belongs to Evette Marie White and Lydia Warr as Oda Mae’s Psychettes as they gospel hoot their way through hawking Oda Mae’s psychic wares.

Brandon Curry nails the stagecraft of an amazing subway scene as a ghost with the message that unlocks Sam’s otherworldly powers. The rap-tinged “Focus” is an acrobatic wonder to watch both lyrically and in its choreography.

There’s no denying that Ghost has its problems. The movie itself was hokey in its time and that schlock remains – the power of love conquers even the afterlife, good guys who have a difficult time saying, “I love you” eventually come around, and bad guys go to hell.

The non-equity cast members of this touring production, many of them fresh out of college, haven’t yet arrived at Broadway caliber, and it’s noticeable especially in the ensemble as they aren’t quite up to some of the challenges of the technically finessed show, especially some of the choreography.

While Douglas and Postotnik have fantastic chemistry together, separately Postotnik seems to be less believable in her scenes with Robby Haltiwanger as Carl (Haltiwanger is the weakest of the four main leads as bad guy Carl, lacking dimensional depth both in his portrayal and and vocal capabilities) and also when she has to go up against the strong acting skills of Stewart’s over-the-top Oda Mae.  Of course, Stewart steals the show with her portrayal of the fraudulent psychic that can hear ghosts  — the character that Whoopi Goldberg brought to Technicolor life on the screen.

Matthew Warchus’s purposeful direction can easily be overlooked. For many of the Broadway rock musicals the direction seems to push the production to a frenetic crescendo, but Warchus takes care to avoid this trapping. Watch closely as Warchus has his singers create moments, and not sing in loud decibels in order to create tension. It’s wonderfully masterful.

The show is visually stunning and barely lets up in its whirlwind. While detractors can say its pizzazz is overwhelming, it’s what makes Ghost: The Musical so full of life.

This entry was posted in Performances, Reviews and tagged Broadway Across Fort Lauderdale, Ghost The Musical, Glenn Ballard. Bookmark the permalink.