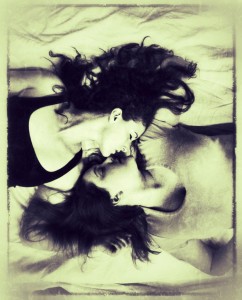 Baby GirL’s Out Of The Nursery

Kim Ehly’s funny and touching tale about a young lesbian discovering her sexuality, Baby GirL, is taking another step – this time into the outside world: The play will be performed at the FringeNYC International Festival August 8-24.

“We’re overjoyed to be able to take Baby GirL to NYC under the umbrella of one of the most popular adjudicated theatre festivals in the world,” Ehly wrote in an email. “Knowing that BG held its own next to thousands of submissions is quite an honor. I literally had to read the email several times before I believed it.”

She wrote, “The best part is being able to take a show that means so much to me and won the hearts of so many people in South Florida, and spread that love and its message all over one of the most amazing theatre cities in the world. The more people who see it, the more people will know you really can build your own family.”

The world premiere directed by Ehly was the inaugural offering of her troupe Kutumba Theatre Company in July 2012. Word of mouth from audiences in the tiny Empire Theater in Fort Lauderdale was so overwhelming that performances often sold out and the work received a Carbonell nomination for best new work.

Ehly initially penned the loosely autobiographical play as a monologue for a writing workshop “when I lived in Manhattan, so in a way, Baby GirL is going home,” she wrote. She then guided it through a version at Women’s Theatre Project, then worked it up as a screenplay. The cinematic feel of brief scenes and quick cuts still dominates the structure. She reconfigured it for a staged reading at her professional alma mater, New Theatre.

Kutumba will be putting together fundraising campaigns to help support the journey to New York. For casting information, email  kutumbatheatreproject@aol.com.

It’s An Honor To Be Nominated, But It’s Nice to Get The Award

Two figures in the performing arts will received the sixth annual Randolph A. Frank Prize for the Performing Arts this month: Nanique Gheridian, co-founder of Palm Beach Dramaworks, and Jan Hanniford, dean of dance at the Alexander W. Dreyfoos School of the Arts.

The prize recognizes “individuals whose dedicated work enhances the quality of life in Palm Beach County.” The recipients will be awarded crystal trophies and $6,000 each at a private ceremony May 19.

Gheridian, an actress, director and arts administrator, will be awarded the Performing Artist Prize. Her involvement in professional theater began more than 30 years ago. She has received several other awards including the Silver Palm Award for her performance in Dramaworks’ production of Benefactors and the best supporting actress distinction from New Times Magazine for work in Dramaworks’ ‘night Mother.  She is Dramaworks’ company manager and grant writer, and she helped develop its Master Playwright Series. She collaborates on productions with the Delray Beach Public Library, Ballen Isles Country Club, Frenchman’s Creek and The Lifelong Learning Center at Florida Atlantic University in Jupiter.

Hanniford, a dean at the school since 2007, has been awarded the Performing Arts Educator Prize. As a professional with the City Center Joffrey Ballet in New York, she danced principal roles by Robert Joffrey, Sir Frederick Ashton, Kurt Joos, Twyla Tharp, Agnes deMille, Jerome Robbins, Margo Sappington and George Balanchine. She was a prima ballerina with   the A.T.E.R. Balletto in Italy and worked with the Netherlands Dance Theatre. She founded the Huntington Ballet Theatre and its Huntington School of Ballet in Long Island. She joined the dance department faculty at. Dreyfoos in 1999.

I Really Need This Job

Normally, we don’t post audition notices, although we’re figuring out whether and how to do it in an organized way. But here are a couple of note:

The Florida Professional Theatres Association is holding its statewide auditions and a series of workshops May 17 – 19 at Riverside Theatre in Vero Beach. For more detailed information, www.fpta.net.

And if you’ve always wanted to “hear the people sing,” here’s your chance: Pembroke Pines Theatre of the Performing Arts is a community theater, but it mounts large-scale musicals that few companies attempt. It has the first licensing rights for Les Misérables for a community theater in South Florida with performances slated for July 11 to August 3. Auditions are being held Sunday May 4 from 1:30 p.m. to 5 p.m. and Wednesday May 7 from 7 p.m. to 10 p.m. at the Walter C. Young Middle School, 901 Northwest 129th Ave., in Pembroke Pines. For more information, visit pptopa.com/2013-2014/upcoming-auditions.html