Glorious Dancing And Melodies Lift Tour Of American In Paris 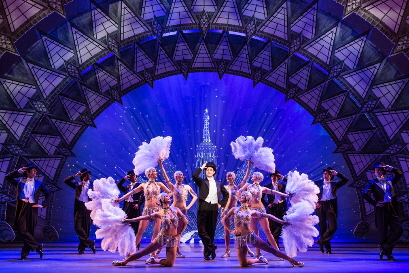 Face it, the Brits may challenge us in creating spectacle-driven musicals, but nobody but nobody puts on a dance musical like we rebels in the Colonies. (Well, Cats, but…)

Indisputable proof is An American In Paris, a new stage musical version “Inspired by the Motion Picture,” referring to the iconic 1951 Oscar-winning film directed by Vincente Minnelli, written by Alan Jay Lerner and choreographed by its star Gene Kelly. Oh, and with a varied collection of tunes by a couple of kids named Gershwin.

Even if you don’t think of yourself as a fan of the genre, even if you couldn’t bond with the new movie La La Land, even if you don’t expect to get caught dead at a ballet, this national tour from Broadway Across America is the kind of don’t miss experience playing sadly for barely a week at the Arsht Center. Doubtless it will tour again and again, but you would be missing this dazzling troupe including Miami City Ballet alumnae Sara Esty, her onstage partner Garen Scribner and Coral Springs native Etai Benson.

To be fair, this celebration of terpsichoria was choreographed by part-time Brit ballet master and first-time director Christopher Wheeldon. But we can claim him after giving him the Tony for his work here and his stay with the New York Ballet.

Still, this is about as American a piece possible even though it is set in post-WWII Paris. The can-do optimism, barely concealed vulnerability and open heartedness that we like to think characterized ourselves in the period suffuses every aspect of this lush and imaginative production.

Even more than the beautifully-sung Gershwin catalog, the lasting takeaway is the stunning dancing not just by the leads but the entire and very large cast down to the swings (35 including swings). The original cast on Broadway including Robert Fairchild and Leanne Cope, was, indeed, a peerless group. But this collection of artists is exemplary.

Watch them leap into the air, glide, pirouette, lift and swing their partner around their body, and arch strained muscles in scene after scene that slide together with a cinematic smoothness. It is a silent tribute to what the trained human body can do. Wheeldon’s endlessly ingenious and fresh movement is storytelling made flesh and, like every aspect of this production, is polished to a high gloss.

The creative team steadfastly refused to have the production look or sound anything like the film about an ebullient American artist who stays behind after V-E Day along with his friends, an acerbic American composer-to-be and a French heir who dreams of becoming a song-and-dance man. All three fall in love with a lovely young French salesclerk training to become a ballet dancer. This cannot end happily for everyone.

Veteran playwright Craig Lucas took the bones of Lerner’s script and produced a more-rounded credible tale. He laid in more darkness than the screenplay with clear reminders that the city has just emerged from years of war, occupation, deprivation, death and danger. As a result, love is a resurrection that must arise from the ashes, not some Technicolor fantasyland. Everyone has secrets, many derived from the war.

Lucas and the creative team also carefully selected Gershwin songs that advance the plot or are tailored the plot to neatly fit the songs. When the composer realizes he has lost the girl to the hero, his rendition of “But Not For Me” is such a perfect choice that it shatters hearts in the audience. The score adapted, arranged and supervised by Rob Fisher melds individual tunes into a multi-level score subtly weaving in snatches of songs during scene changes that are still to come.

The evocative visual elements are not simply attesting not in their punch but their sheer originality – notably Bob Crowley’s costume and set design, Natasha Katz’s imagistic lighting and 59 Productions inventive and crucial projections. The latter once again screams out the need for a stand-alone Tony and Carbonell categtory recognizing this ever-growing element of theater.

Wheeldon, the Gershwins and the audience should be grateful for the vision of the virile Scribner as the expatriate artist and gamin-faced Esty as the heroine tortured by obligations to the past. They are appealing actors-singers, surprisingly expert in those facets for performers so accomplished in their primary skills set. Esty in particular evokes a wariness of someone who has seen the world go mad, which makes her shy growing smile all the more radiant.

But they dance as if barely able to contain their joy and with a grace that sometimes stops the respiration of the audience. Yet when Esty unspools a bell-like soprano on the “The Man I Love” you wonder how someone who dances like that can sing like that. 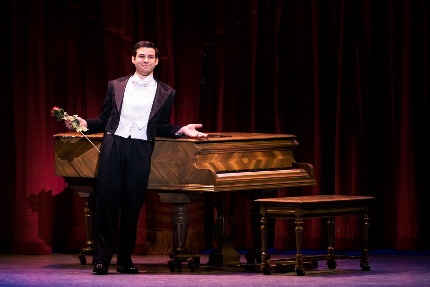 Just as impressive is Benson, a 2005 JP Taravella grad who won acclaim in 2013 as the title character in GableStage’s My Name Is Asher Lev. As the narrator, Benson provides the glue holding the story together. While his nascent composer is full of wisecracks and good-natured jibes, Benson has no trouble exposing the impassioned wounded romantic beneath without making the character mawkish or melodramatic. He only gets one fantasy dance number with Nick Spangler as the Frenchman in the blowout production number “I’ll Build A Stairway To Paradise,” but he gets some of the best songs in the show including the aforementioned “But Not For Me.” We wrote of his GableStage performance three years ago “…his work here promises a long career worth following.” His work here proves us right.

2016 has been shaping up to be a tough, tough year with a few bright spots. But this tour of An American In Paris (and the show’s theme as well) reminds us of the spirit-restoring power of art in a dark time.

An American In  Paris runs through Sunday at the Broward Center for the Performing Arts as part of the Broadway Across America-Miami series at the Adrienne Arsht Center for the Performing Arts, 1300 Biscayne Blvd. Performances 8 p.m. Tuesday-Saturday, 2 p.m. Saturday, 1 p.m. and 7 p.m. Sunday. Runs 2 ¾ hours including one intermission. Tickets $29-$150. Call (305) 949-6722 or visit http://www.arshtcenter.org/

This entry was posted in Performances, Reviews and tagged An American In Paris, Etai Benson, Sara Esty. Bookmark the permalink.