Godspell Gets Another Fresh Makeover at Actors’ Playhouse 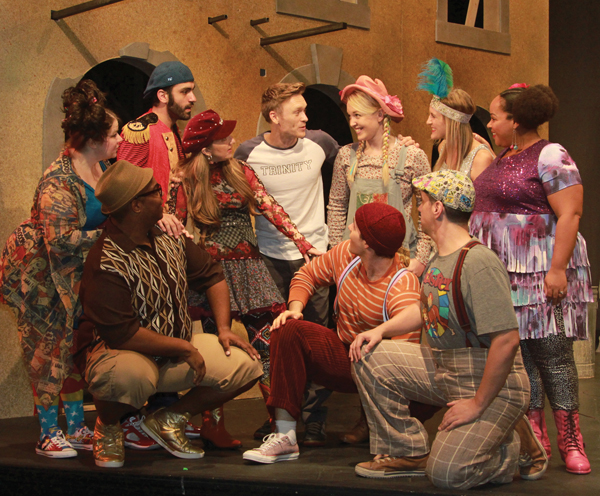 The sparse crowd Saturday night at Actors Playhouse must be a result of people thinking, “Oh, I like it well enough, but I’ve seen Godspell.”

But they’d be wrong, to their loss. This earnest troupe led by director David Arisco has reinterpreted and re-imagined for the umpteenth time the venerable warhorse so that it seems fresh and familiar at the same time.

Godspell has never been a static museum piece. It has always undergone revisions, reordering and topical updating, welcoming each company to tailor it to their skill set and vision. Sometimes that works; sometimes it doesn’t. The edition that toured through the Broward Center a number of years ago featured banks of television monitors blasting out a background of music videos.

Godspell’s stylistic elasticity is intentional. When it was envisioned 40-plus years ago, its creators meant it to be as contemporary as possible a retelling of the Gospel according to Matthew (with a little Luke thrown in) to prove that the underlying verities were not just universal but timeless.

If the externals change – flower children in a park giving way in this production’s street people in a rundown urbanscape – the show’s core strengths remain including an infectious, affecting score by Stephen Schwartz (Wicked, Pippin) plus a playful sensibility and boundless compassion in the script by John-Michael Tebelak.

While a parochial retelling of Jesus’ journey, its preachment of love and forgiveness irresistibly resonates with the battered yearnings of Mankind regardless of specific faith.

Every time an ensemble walks to the edge of the stage and sing the fervent plea a cappella, “When wilt thou save the people?” it raises a few hairs on the back of your neck, just as it does here.

Still, this production is not as emotionally affecting as it could have been because someone chose to mount the Playhouse’s 25th season opener in its cavernous main auditorium, rather than its upstairs space. Godspell is an intimate show that needs to establish a personal bond with the audience as well as a sense of community among the patrons. That’s pretty hard to do in a 600-seat house. A clear example is that Judas’ slow disillusionment in the second act normally can be easily seen by the audience a dozen yards away. But here, the blameless Nick Duckart’s subtle evolution gets lost in the ensemble spread across a stage more appropriate for Les Miserables. The effect of this distancing cannot be overstated.

That said, this production has a multitude of blessings making it well worth seeing. Few shows fall so completely in Arisco’s wheelhouse. Although he is perfectly able to direct a straight play like August: Osage County, his undisputed strength is musical comedy staging. Arisco has a limitless imagination for adorning a script with scores upon scores of grace notes and bits of comic business. It’s even arguable in this case that the meat of Jesus’ Sunday School lessons get a bit lost in the profligate torrent of Arisco’s expert tricks of the trade. But he also knows how to excavate a dramatic moment such as Jesus nearly whispering the prayers at the Seder and having Jesus kiss a reluctant Judas at the moment of betrayal. The apostles’ individual farewells at the Last Supper are especially moving.

Apparently encouraged by the licensee, Arisco and the company have updated and localized the script with nods to Facebook , Trump and the Kardashians, even allowing you-know-who to cap one skit with the line, “I am Jesus and I approved this message.”

The ten-member ensemble across the board is one of the strongest acting/singing casts that Actors Playhouse has ever pieced together. It isn’t that there isn’t a weak link; there isn’t even a mediocre one. Several are holdovers from last season’s production of Joseph and the Amazing Technicolor Dreamcoat. Their diversity, both ethnically and in body type, seems natural rather than designed.

Unavoidably first among equals is Josh Canfield who played Joseph last season and one of the lovers in the Caldwell Theatre’s Last Fall. In keeping with Arisco and Tebelak’s vision, Canfield’s Jesus is a gentle, playful teacher anxious to spread the gift of his knowledge. There’s no sense of divinity about his performance; instead Canfield radiates peace like a balm to a wounded flock. The persona is beatific, but as accessible and humble as a fresh graduate from the seminary who has chosen to work in the inner city. Canfield is gifted with a sweet tenor voice, but more importantly a sensitivity to the underlying lyrics, exemplified by his verbal caress of “Beautiful City.” He also credibly delivers the second act sorrow as he approaches his inevitable fate.

Duckart, who played Pharaoh in Joseph and the doctor in Next to Normal, reaffirms his skills combining dramatic intensity and goofball comic chops as both John the Baptist and Judas. The former Miamian is based in New York now, but fortunately he comes home frequently to work.

Doing justice to the rest of the cast, each with a clean clarion voice and a personal vitality, would take a paragraph each. But we have to mention in alphabetical order Henry Gainza, dance captain Jeni Hacker, Shea Hess, the full-throated Kareema Khouri (Caldwell’s Working and G4’s Motherhood the Musical); the lovely Heather Kopp who leads a fresh take on the over-exposed standard “Day By Day,” the utility comedian Clay Cartland, Cindy Pearce who was the standout in Slow Burn Theatre’s Urinetown, and Don Seward. And a special nod to Christopher Kent who played in the pit, was assistant stage manager and gave an uncredited but heart-breaking rendition of “On The Willows” from offstage.

And the music. People who have memorized each note of the original cast album will recognize the score, but it has been heavily rearranged and re-orchestrated from its folk rock roots to a more contemporary sound with plenty of Mariah/Whitney/Beyonce melisma. In many cases, the tempo has been changed to allow singers to savor the meaning of the lyrics. For instance, the one song written for the film version, the exultant duet “Beautiful City” is sung here slowly and affectingly by Jesus, resulting in an achingly lovely vision of what mankind wants to be and can be.

Schwartz should send a thank you note to musical director David Nagy who both leads the fine offstage band and who has blended the cast in the complex arrangements of soaring harmonies. Choreographer Barbara Flaten once again augments Arisco’s staging sense with joyous gyrations. Ellis Tillman appropriately garbs the cast in a motley assortment of motley seemingly cadged from thrift stores.

While choosing the large auditorium was a serious mistake, set designer Gene Seyffer expertly fills the stage with a blighted cityscape including the ruins of a church with empty arches where stained glass once stood, a boarded up three-story warehouse, the curled away corner of a hurricane fence to a playground and a rooftop water tower for the opening scene’s baptisms. Arisco uses every inch of the multi-tiered playing space including two runways jutting into the aisles.

While this Godspell is not as enthralling as it can be, the production’s imagination, unassuming altruism and pure hope appealing to our better natures is undeniably winning. 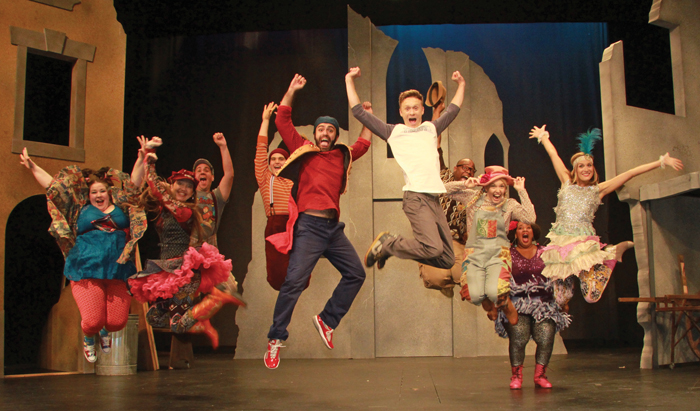