In Dramaworks’ Lovely Talley Tale, The Only Folly Is The Set 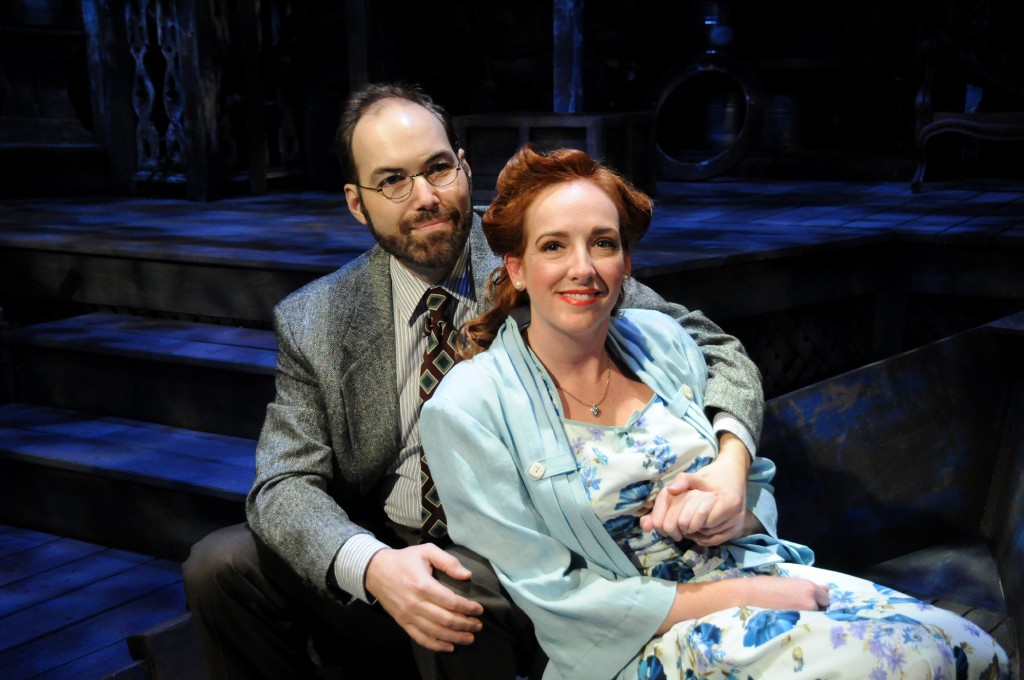 Somewhere along the line, romance got a bad rap.

But Talley’s Folly doesn’t ask you to turn off your brain even as it embraces you with an enchanting pas de deux of emotions, at least in Palm Beach Dramaworks’ charming seduction starring Brian Wallace, Erin Joy Schmidt and the crucial third leg of the stool, director J. Barry Lewis.

Lanford Wilson’s hero and heroine – and they are quietly heroic – are not dewy-eyed teenagers or artificially star-crossed movie stars. They are complex, damaged and intelligent adults terrified of commitment for justifiable reasons, yet impelled by the human need for love.

Wilson’s 1980 Pulitzer Prize-winning “waltz” is skilled storytelling, stirring in a steady striation of gentle humor into what is, emotionally, a life and death conflict.   While anything but an eventual union would be unforgiveable, Wilson, Lewis, Wallace and Schmidt often make you wonder if these two scarred porcupines will ever allow themselves to merge into a couple.

You’ll likely lean forward to physically urge the pair to cope with the private baggage that blocks their union. Near the end, as the last obstructive secret tumbles out, you may have to remind yourself to breathe.

No, it’s not a perfect show. Even Wilson himself acknowledged that dramatic structure was not his forte and the story meanders into social commentary. Wilson also apologized for giving the hero a showier, meatier role as the proactive pursuer than what he gave the heroine who spends much of the show reacting and rebuffing.

Further, the actors respect their characters’ paralyzing barriers so well that it’s quite hard for some time to see the underlying affection or even the loneliness that makes one pursue and the other not simply walk away. Finally, it’s difficult for actors to establish the essential prickly chemistry when their mismatched characters are pushing and pulling away from each other so hard.

The setting is a resplendently dilapidated and secluded boathouse on a summer evening in 1944 on the Talley acreage in the rural Missouri town of Lebanon as wounded “boys” are returning from World War II and the Depression-scarred homefront folks are peering into an uncertain future.

Matt Friedman, a 42-year-old Jewish refugee, has come to woo Sally Talley, the 31-year-old “old maid” daughter of the town’s wealthiest family. They had a romantic interlude about a year ago during Matt’s vacation from his job as a tax accountant in St. Louis. Matt has carried on a one-sided courtship mostly by mail except for one surprise visit when Sally hid from him at the veterans’ hospital where she works.

But both have been cauterized by profound events that go far beyond previous emotional attachments. They are impossibly uncomfortable in their own skin let alone here in Lebanon. While Matt is seemingly the pursuer, he often retreats when Sally tries to delve into his secrets.

Tonight, Sally has come home from her job to find Matt in the midst of another surprise visit, beguiling and alienating various members of her family who would be anti-Semitic if they had ever actually met a Jew before. Matt knows Sally will retreat to her haven, this Victorian folly, so he comes here ahead of her to tell us the audience that we are about to see a 97-minute waltz.  Sure enough, the furious Sally storms in to excoriate Matt – and the dance begins.

We’ll praise the actors soon enough, but first acknowledge how expertly and invisibly that Lewis has helmed this piece. Once again, Dramaworks’ resident director has broken down the script moment by moment, helped his actors analyze every beat and then reassembled it with a marvelous pacing crucial to an intermissionless evening.

Much of the time, Lewis has Wallace drive the play forward with a voluble stream of words as if the sheer volume and velocity of the torrent will shield Matt from pain – or more specifically, rejection. But when Matt or Sally let down their guard to tell a revealing story or register a painful invasion of their purgatory, he relaxes the pace to allow them and us to weigh the import of what is being said.

In Dramaworks’ former vest pocket space a block away, Lewis’ skill staging physical movement was harder to spot other than his masterful work in Copenhagen.  Here, he has the room to move the Matt and Sally around the multi-leveled set to silently underscore the events of the plot, splitting them up in their private anguish and bringing them together to clash like hopelessly mismatched pieces from two different jigsaw puzzles.

Wallace, a Jacksonville native who works up and down the East Coast, is mesmerizing as Matt, a man whose affability instantly wins over the audience by deploying a gentle and self-deprecating humor with a quick-witted and nimble patter.  Wallace’s Matt exudes an immigrant’s smile that is as much a protective device to deflect expected horrors as it is to express genuine joy. When he finally exposes his painful past clothed in a wry distancing fable, Wallace communicates the anger and sorrow under the glib delivery.

And then there’s Schmidt, the local mainstay whose work ranges from a key member of Mad Cat Theatre’s surrealistic outings to her triumphant naturalistic turn as the wife in GableStage’s Fifty Words. She’s been off the boards about a year giving birth and raising a daughter. But now she’s back

Schmidt has always been notable for the ability to totally inhabit her characters so completely that you never see her supremely technical acting chops. She has both a quirky beauty and an even quirkier voice that encompasses a scratchy high voice and low rumble, sometimes simultaneously. Speaking as a former Missouri resident and the husband of a Missouri farmgirl, I can vouch for the accuracy of Schmidt’s broad accent, which rightly owes as much to Arkansas and Oklahoma as it does to Mark Twain.

Throughout, Schmidt’s Sally clearly is using her anger at Matt’s club-footed intrusion into her carefully-balanced life as a shield, pointed toward against Matt’s endearing entreaties and inward against what she is feeling. Schmidt, with Lewis’ guidance, only allows Sally to melt by millimeters.  It is only when she is facing away from him that we occasionally see her yearning seep out through watery eyes. We could have used a shade less anger and a few more glints of sublimated affection earlier on to make Matt’s pursuit seem less quixotic. But Schmidt creates a independent-minded Sally that any man would be a fool not to fall in love with.

In the last but not least department is the asterisk-free triumph of the physical production. One of the joys of any production of Talley’s Folly is the opportunity it gives designers to create what Lewis calls the third character in the play – the cattail-choked fading folly itself. Set designer Michael Amico, lighting designer Ron Burns and sound designer Matt Corey have outdone themselves by creating an atmosphere that is both refuge and crucible.

Amico, his construction crew and propmaster Michael Blair has covered Dramaworks’ wide stage with the rapturously ramshackle playground that makes the ravages of time both sad and romantic. The boathouse is bordered by a gazebo with hardly any roof left, a dock jutting into the stream, a very unstable rowboat that rocks anytime anyone steps in it, and willow branches drooping in through the ceiling.  But anyone who has seen Amico’s work in Dramaworks’ previous space such as The Beauty Queen of Leenane or The Gin Game know that his unequalled talent lies in an attention to detail such as painting realistic textures and populating the sets with convincing detritus.  Since moving into the new theater on Clematis Street, Amico has created a false proscenium decorated to fit each individual show. In this case, the arch has a wood molding and a huge arc of gingerbread lattice.

But the set would not be half as magical without Burns’ subtly shifting lighting, including the twilight turning to evening and the shafts of moonlight dappling the  the skewed slats in the folly’s lathe walls. Credit, too, Corey’s the aural atmosphere reflecting nature on a rural night and Brian O’Keefe’s pitch perfect period costumes.

This work, which won the Pulitzer Prize in 1980, is one of Wilson’s best known and most popular along with the acerbic Burn This and The Hot L Baltimore.
The play is the first chronologically (although the second written) in an initially unintended trilogy that Wilson created about different generations and eras in the Talley family. The others are The Fifth of July and Talley & Son.

Wilson, who died in March 2011 at the age of 73, was one of the most acclaimed and popular playwrights who came to prominence in the 1960s and 1970s with plays that began off-off-Broadway, eventually played on the Main Stem but lived on almost continually in regional theaters.

Although Wilson wrote with deep compassion for wounded souls, he often placed them in a cold, angry and even violent world – a trademark melding of the modern man’s tough and tender natures at war with each other. In Talley’s Folly, the master metaphorist penned a wonderful anecdote about an old man in a cafeteria telling Matt that “people are eggs. Said we had to be careful not bang up against each other too hard. Crack our shells, never be any use again. Said we were eggs. Individuals. We had to keep separate, private.”

But Wilson was always concerned that he not be caught being cloying or manipulative. He underscored the artifice of the entire endeavor by opening the show with Matt directly addressing the audience, telling them they are about to see a 97-minute play. He even calls for the sound man to give him a deeper sounding bark from an offstage dog.

You can resist the moonlight. But if, like the characters, you give yourself over to romance, the only folly is the building on stage.

Side note: Wilson’s first full-length play, Balm in Gilead, is being performed by the New World School of the Arts at 7:30 p.m. tonight (Saturday) and 2 p.m. Sunday at the Louise O. Gerrits Theater, 25 NE 2nd St., 8th Floor, Miami.

2 Responses to In Dramaworks’ Lovely Talley Tale, The Only Folly Is The Set